What was extraordinary about Rafael Nadal’s Australian Open win against Daniil Medvedev, was not only that he came back from two sets down, a COVID diagnosis in December, and a foot injury that cut short his 2021 season. It was that he won his 21st grand slam as a relative geriatric of the sport.

He beat an opponent 10 years his junior, one with, by virtue of his age, significant physical advantages. 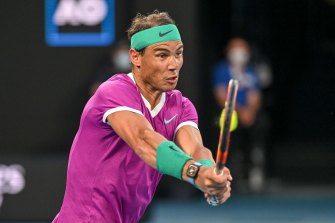 So, how did Nadal do it?

There are the obvious aspects like genetics, a daily two-and-a-half hour conditioning regime (that doesn’t include his tennis practice), a diet that is no longer the “100 per cent disaster” it was when he was young and includes fish, rice, vegetables, pasta, protein shakes and the odd bit of chocolate and red wine. He also has his own physio and a team dedicated to helping him perform and recover. But then so does Medvedev.

The less obvious aspects may be more revealing. They provide insight into how the 35-year-old could win, nearly a decade after many other professional tennis players have peaked and retired, and reveal how the changes to men’s fitness as they age might become an advantage.

These advantages are also evident in athletes like Kelly Slater and Tom Brady. Respectively, the 49-year-old champion surfer knocked out a 22-year-old Hawaiian rising star, Barron Mamiya, from the Billabong Pro Pipeline tournament this week, while, the 44-year-old NFL player announced his retirement this week following a 22-year career and a record seven Super Bowls.

Men’s speed and agility tend to peak in their late teens and early 20s and “falls consistently after that,” says Tim Olds, a professor of behavioural epidemiology at the University of South Australia.

“With other things being equal you would think that Rafa would be disadvantaged in terms of aerobic power,” Olds explains.

Reaction times also decline pretty rapidly with age, from the early 20s onwards. “After a certain age it starts to fall so much you’re history,” says Olds, referring to elite sports competition. “Past 35 it’s very rare to see them competing… I don’t think Serena Williams or Roger Federer will win another grand slam.”

Finally, bone strength decreases with age, which means the wear and tear from a life of playing competitive sports takes its toll and sharply increases the risk of injuries and fractures.

“Eventually the injuries just get you down. No matter how you manage that, by taking strategic breaks and what-not, it just takes you so long to recover that you lose [your edge],” Olds says.

This is a particularly sore point for Nadal, who has suffered injuries almost every year of his 20-year professional career.

With so many disadvantages, the chances of Nadal winning that match on Sunday seem as unlikely as they did when he lagged two sets behind Medvedev.

“Although we might normally think that we should fatigue quicker as we age, in fact, many changes in our bodies help to improve our endurance,” explains Tony Blazevich, a professor of biomechanics at Edith Cowan University, and the director of the Centre for Exercise and Sports Science Research.

“Peak endurance capacity in men is likely to be reached by athletes in their early 30s, but the peak is later as the duration of event increases; so it’s older for ultra-distance events (late 30s).”

The longer an event goes, the older the best people get, agrees Olds, who notes the age of world record-holders in running increase from 23 for the 10k, 26 for the 21km and 36 for the marathon.

“What that suggests is that they learn to move more efficiently, so they can run about the same speed using a lower oxygen capacity,” he says.

In the marathon five hours and 24 minute Medvedev/Nadal match, increased endurance may have given Nadal the edge, Blazevich says: “So even if the 25-year-old Medvedev had a speed advantage, that advantage was probably lost as the match continued for many hours.”

Muscle strength in men also peaks later, typically between 30 and 40. “People tend to hold onto their strength for much longer, so when you’re 40-45 you’re not much weaker than you were at your peak,” Olds says. “In terms of strength, Rafa may have had the advantage.”

Finally, the experience that comes with age can compensate for physical disadvantages.

So, although Nadal’s reaction times may not be as fast as Medvedev’s, he has much more experience to predict what will happen next as well as improved pattern recognition (allowing him to anticipate ball trajectory earlier) and game management, Blazevich explains.

“Stamina,” he adds, “has both physical and psychological aspects, and Rafa’s incredible mental fortitude, including the knowledge that he’s beaten all-comers on the biggest stages, may have been key here.”

The question becomes, what can men do to maintain their peak or at very least slow its decline?

The straight-forward answer is regular physical activity, including both strength training and aerobic exercise that gets the heart rate up to improve oxygen efficiency.

“The harder you train, provided you avoid injury, the lower the rate of decline… you start from a higher point,” Olds explains. Maintaining bone mass may be slightly more complicated, he adds: “It’s really important for young people to get peak bone mass because if you start from a low peak it’s going to fall from there… that’s why things like osteoarthritis is often described as a paediatric disease with geriatric consequences.”

Physical activity and a good diet, including enough calcium – which can be found in dairy products, almonds, broccoli, kale, canned salmon with bones, sardines and soy products, such as tofu, are key to creating bone mass. Numerous studies also suggest that resistance training slows the loss of bone mass as men age.

“We’re all going to decline, but it helps to decline from a much higher starting point,” Olds says, pointing out that if we maintain as much as possible, even while certain aspects of fitness fall, “we learn to do more with less”.