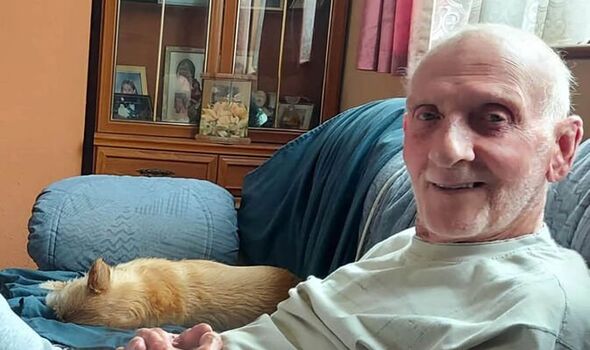 Eventually his suffering became too much and he took matters into his own hands. The 75-year-old killed himself in his garden using a legally owned shotgun. Norman’s son Gareth is sharing his story to support the campaign for a change in the law to give terminally ill people who are expected to die within six months the option of an assisted death. Gareth, 45, said: “What my dad did, I’ve never considered it suicide. He wanted to end his own life and end his suffering.

“He had tried all the treatments, the drug trials, everything. But it was just too much in the end.”

Born in Cardiff, Norman served in the Welsh Guards and played for the British Army rugby team. He later worked as a builder and married Gareth’s mum Valerie in 1969. She died of a heart attack in 2001.

After his diagnosis, the cancer was kept in check by hormone therapy for 10 years. He then joined a drug trial and had chemotherapy but it spread to his pancreas, spleen and later his bones, at which point doctors said it was terminal.

Norman grew weaker and once fell while walking his dog Jack on the marshes near his home in Gravesend, Kent. He broke his leg and crawled for an hour before he was found.

The grandfather-of-seven had his pancreas removed, his mobility declined and he had a stroke two months before his death. He was given palliative care and increasing doses of morphine but it was not enough to keep the pain at bay.

Norman told friends after his diagnosis that he would kill himself if the disease became too much. But over a decade later in June 2021 his family had no idea of his plan.

Gareth, who lives in Essex, said: “He had a legally owned shotgun that was kept in a locked box in the loft.

“The man could barely get up the stairs, no one thought in a million years that he could have got that shotgun but he did.

“He sat in the garden. He phoned 999, told them what he was going to do, then phoned me and told me the same. He said: ‘That’s it. I can’t have another night like last night. I’m going to shoot myself now.’”

Gareth called 999 and his two sisters, who lived near their father. Despite his warning not to enter, one of Norman’s daughter’s found him before an ambulance and armed response unit arrived.

She is now on antidepressants and having counselling. Tragically her husband is also terminally ill with brain cancer and wants to end his life.

Gareth believes his family could have been spared such trauma if Norman had been allowed to die with medical assistance.

He said: “He would have gone for assisted dying if he could. But I think most people’s perception of assisted dying is Dignitas, going to Switzerland – something that they can’t afford.

“We were robbed of the option for it to be calmer and quieter, and for everyone to come to terms with it before he went.”

The Office for National Statistics is due to publish data soon on suicides involving terminally ill people, following a request by Matt Hancock when he was health secretary.

The Daily Express Give Us Our Last Rights campaign is backing Dignity in Dying’s blueprint for a change in the law and a petition urging the Government to bring forward legislation.

The group’s chief executive Sarah Wootton said: “In his desperation to have control over his own death from terminal cancer, Norman felt forced to end his own life, as hundreds of dying Brits do every year under the ban on assisted dying.

“The current law does not protect terminally ill people; it abandons them when they most need compassion and support.”

• When life is difficult, Samaritans are here – day or night, 365 days a year. You can call for free on 116 123, email [email protected], or visit www.samaritans.org to find your nearest branch.