"I have such a bad metabolism," is something many have uttered while watching a friend chow down on their daily chocolate croissant with seemingly no consequence.

But US sports nutritionist Dr Dana Ryan, who counts the LA Galaxy and Western Sydney Wanderers among her clients, says this idea that our metabolism is some unwavering genetic blessing or curse is one of the biggest misconceptions people have when they try to lose weight.

"It's not like you're born with it and you're stuck with it forever," she laughs. 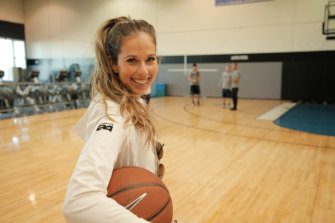 Dr Ryan, who is currently on a speaking tour across Australia, says this misunderstanding can lead to people undereating when they increase their exercise regime in an attempt to expend more calories.

"As intuitive as that might seem, that's not how the body works," she says adding that, although genetics plays a small role, good diet and weight training will help most people living a sedentary lifestyle to improve their ability to achieve or maintain a healthy weight.

"By doing the work and then consuming some protein afterwards, you build muscle, and then that muscle will increase your metabolism, so ultimately you end up burning more fat and losing more weight."

If you have a jar of spaghetti sauce: do some bicep curls with it. If you have a toddler, hold them and do some squats.

Dr Ryan recommends carbohydrates and lean protein after a workout ("when you're exercising, you're becoming dehydrated and breaking down your muscle fibres, so you need to recover"), as well as focusing on increasing your incidental exercise throughout the day, rather than viewing fitness as a 30-minute daily commitment.

According to 2017-18 data from the Australian Bureau of Statistics, two-thirds (67 per cent) of Australian adults are overweight or obese, an increase from 63.4 per cent in 2014-15.

Despite these statistics, Australians are actively interested in losing weight: a University of Sydney study published in April found 81 per cent of people with obesity reported having made a serious effort to lose weight, but only half had discussed this with their doctor.

The challenge of metabolism can become particularly apparent when we get older, and our muscle density decreases. But Dr Ryan believes prioritising weight training as we age can help to slow this process.

"You don't have to have a big fancy gym membership to do weight-bearing activities," she says. "Even if you're at your house and you have a jar of spaghetti sauce: do some bicep curls with it. If you have a toddler, hold them and do some squats."

Although her standard clients are elite athletes, Dr Ryan says the average person can learn a lot from the daily routines of those who have made being physically fit their profession.

"Being an athlete is really about a lifestyle: it's about making sure you are hydrating throughout the day, making sure you're getting enough sleep at night," she says. "It doesn't matter if you're winning the Olympics or just getting off the couch for the first time, you shouldn't think about your workout during the 30 minutes you're doing it."