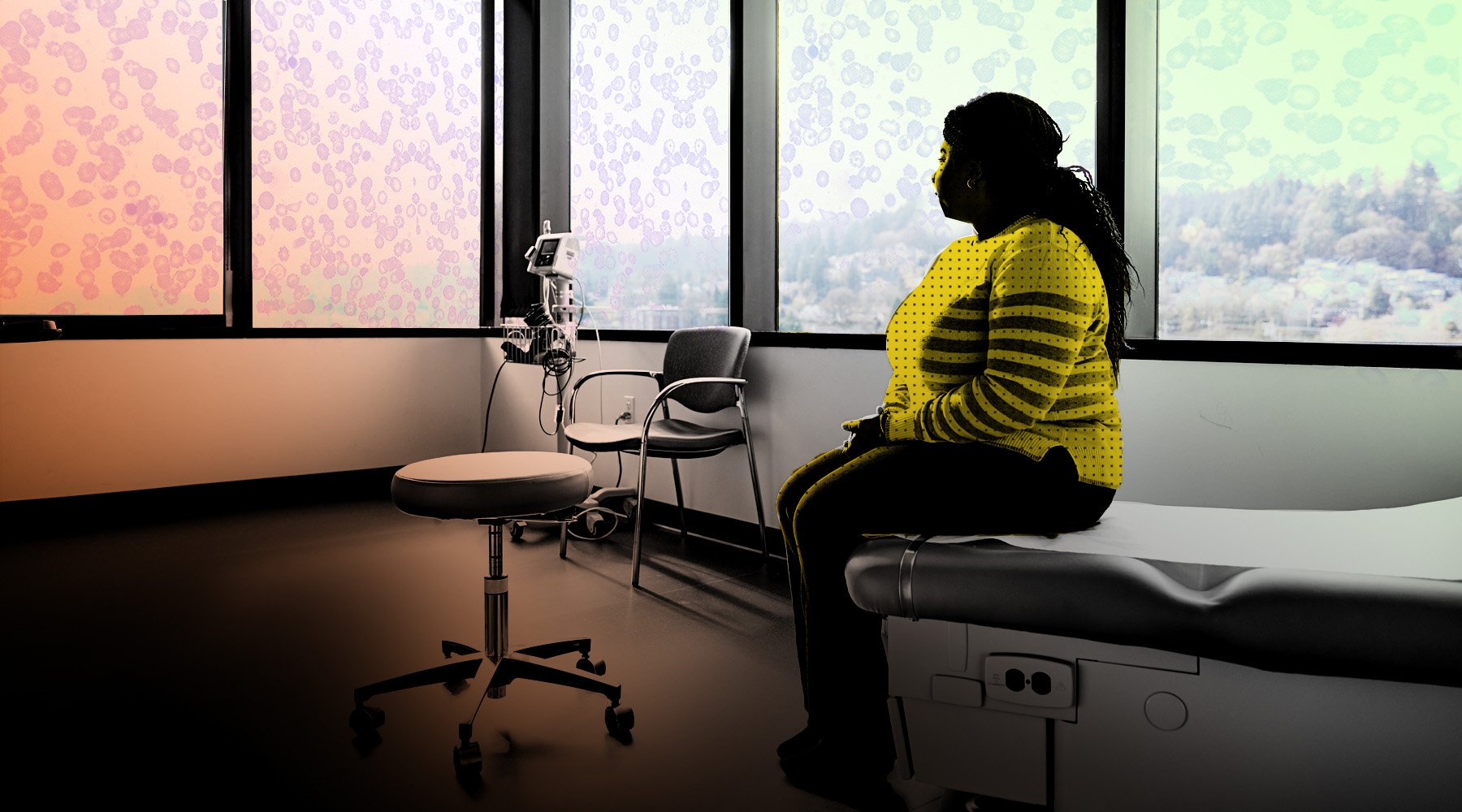 Shocking new research has revealed the extent to which sickle cell patients are being failed by healthcare – with seriously unwell people being treated like criminals.

According to a new large-scale study into sickle cell treatment, almost half (46%) of patients said emergency room healthcare providers did not believe them about their symptoms, while 48% said they have been treated like a drug seeker in A&E.

Sickle cell disorder (SCD) is a rare condition that causes red blood cells to turn into a sickle shape, and causes extreme pain, long-term damage to organs, and often early death. It is most likely to affect Black people with an African or Caribbean background.

‘The study reveals that SCD is a very difficult disease, both for patients and carers, but also healthcare professionals as well,’ Sebastian Stachowiak, head of Europe and GCC at Global Blood Therapeutics, tells Metro.co.uk.

‘This report really highlights the difference in quality of care comparing specialised sickle cell treatments versus the care patients might receive when they go into an emergency room.’

The study – carried out across 10 countries including the UK, US, Canada, Germany, France, Brazil and the GCC (UAE, Bahrain, Oman, KSA) – found that patients with sickle cell disease remain ‘dramatically underserved’ by healthcare systems, while medical professionals don’t feel like they have the knowledge of the disease or their patients, to properly treat them.

People with sickle cell disease, who are significantly more likely to be of African or Caribbean descent, typically die between 40-45 years old. GBT believes this is far too early and that through better understanding and communication, healthcare systems globally can help patients live healthier, happier and longer lives.

The study of 1,345 people, including people living with SCD, carers and healthcare professionals, revealed that almost 40% of patients had experienced poor care from emergency medicine professionals, which they believed to be because of their ethnicity or socioeconomic background.

More than half (54%) of patients said they had experienced poor care in the past from emergency medicine professionals due to a lack of knowledge about SCD.

The new findings follow a groundbreaking UK inquiry in 2021 that found ‘serious care failings’ in the care of sickle cell patients and evidence of attitudes underpinned by racism.

This new study suggests that this is not a problem that is just confined to the UK, but a systemic issue worldwide.

The realities of living with sickle cell

Aisatu Beadford-King was born in Liberia and moved to the UK when she was three years old. At this point she was already displaying symptoms of having sickle cell disease, however, her mother was not aware of her daughter’s condition.

‘Every time they would take me to hospital, the doctors would tell my mum it’s malaria, she is fine,’ says Aisatu.

Soon after, Aisatu had her first crisis at age five, she was eventually diagnosed with sickle cell. Her family then began testing for the genetic disease and started educating themselves about the condition. For Aisatu, education about sickle cell is lacking in the UK and across the globe.

‘I have had a few negative experience while receiving treatment for sickle cell, especially in A&E,’ Aisatu tells Metro.co.uk.

‘I’ve had nurses tell me I’m exaggerating my pain, others not listening to me when I’m explaining what works for me and what doesn’t. It makes me feel less than, I feel like maybe my pain isn’t valid and I’m just wasting time.

‘It truly infuriates me when I have to experience things like this.’

Aisatu says seeing how sickle cell effects her family and friends is very hard to deal with.

‘The mental health side of sickle cell has to be my biggest struggle,’ she adds.

‘People don’t understand what sickle cell is and how different environments can even cause someone to have a crisis. People need to know how to get tested, so they know if they have the sickle cell trait and can prevent passing it onto another generation.’

This thought prompted Aisatu and her mother to create a charity – Africa Sickle Aid. They have been able to send care packages to developing countries to support those who may not have access to treatment and care services.

‘It was my mum’s idea to start the charity – to understand my sickle cell. I am thankful to her, not everyone is so lucky.’

Aisatu is determined to advocate for global health equity in terms of sickle cell, to ensure that those living with sickle cell in developing countries know that someone across the pond still remembers them and relates to their journey.

What is Sickle Cell Disease?

Sickle Cell Disease (SCD) is a rare condition that affects haemoglobin, a protein carried by red blood cells that delivers oxygen throughout the body.

It is a lifelong blood disorder that occurs when a person inherits sickle cell genes from both parents.

Healthy red blood cells are disc-shaped and flexible so that they can move easily through the blood vessels and carry oxygen to vital organs.

However, in people with SCD red blood cells lose their flexibility and become rigid, sticky and crescent or sickle shaped. The sickling process causes the breakdown of red blood cells, which leads to haemolytic anaemia (low haemoglobin and low oxygen delivery in the body due to red blood cell destruction).

The sickled red blood cells can damage blood vessel walls, resulting in vasculopathy (lesions occurring in small blood vessels), and this in combination with the sickled cells, causes blockages in capillaries and small blood vessels, causing pain and impeding the flow of blood and supply of oxygen throughout the body.

Patients with SCD experience progressive, lifelong complications and severe morbidity, including damage to major organs such as the liver, kidneys, lungs, heart and brain, which contributes to early death and can erode the potential of patients and their families.

Chronic lack of understanding among medics

Speaking to healthcare professionals, the study found that almost three quarters (73%) said that patients of lower economic status can be ‘more difficult to treat’.

Almost a third of doctors and nurses (31%) found it challenging to understand their patients’ needs.

Only half of healthcare professionals (50%) feel they have sufficient tools to manage the long-term damage that SCD causes.

For Sebastian at Global Blood Therapeutics, the issue comes down to a lack of education among healthcare professionals, and a need for a holistic change in every element of global healthcare systems.

‘It’s really important for medical professionals to have an openness to understand the community, the sickle cell patients, and then to start spreading that message and educating others to really understand that as well,’ Sebastian tells Metro.co.uk.

‘You need to be open in terms of really understanding the underlying beliefs of the community and the SCD patients, and then working with that community to improve care and treatment, and then, as a result, the standard of living for that community as well.

‘For me, it really is about understanding, compassion, humility, and then working together to address things as they come up.’

Sebastian says that for the prospects for sickle cell patients to really improve in the UK and the rest of the world, there needs to be a holistic solution, with governments giving their support to healthcare systems.

‘The study was global – across 10 countries, four continents – and these findings were universal,’ says Sebastian.

‘It’s about all four stakeholders really aligning on what are the priority projects and initiatives that will move this disease area, and then having clear action plans and follow-through on that as well.’