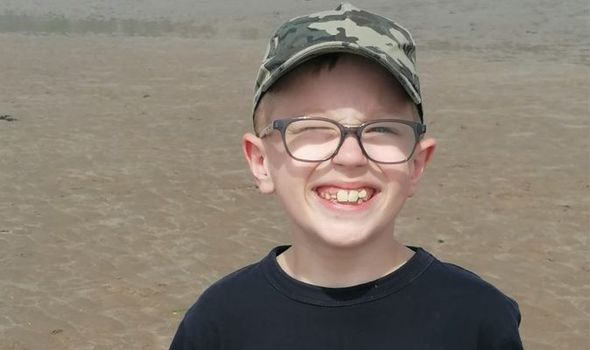 Mum Catherine decided to get an eye test after noticing he had also developed a squint – and during the test at Specsavers in Ashby-de-la-Zouch, Derbyshire, optician Adnan Nawaz immediately noticed something was very wrong.

The optician recommended Alfie be taken to accident and emergency – where doctors diagnosed bilateral papilloedema, a neurological condition that is caused by increased intracranial pressure.

It can be fatal for some, cause sight loss or serious changes in vision for others.

Thankfully, due to the swift diagnosis, Alfie underwent lumbar puncture treatment to help relieve the swelling on his brain and has since made a full recovery.

Giles Edmonds, Specsavers clinical services director, said: “Such stories really do put it into perspective that whenever you experience any changes to your vision or have continuous symptoms, you need to see an optician.

“A lot of people have no idea that such health issues can be identified through an eye test.

“Thankfully, in Alfie’s case, it was a happy ending, but this might not be so with others who ignore symptoms through fear of what that could mean for their health.”

Another who narrowly avoided permanently losing her sight, as well as her career, is 53-year-old Lesley Grocock.

The delivery driver from Nottingham started to experience black dots in her vision, which she initially put down to getting older – but she was actually suffering a retinal tear in her eye.

“As it turns out, if I’d left it just a couple of weeks longer, I could have lost the sight in my eye – it doesn’t bear thinking about.”

Lesley underwent an operation the next day to repair the tear with three stitches and the insertion of a silicone rubber implant, followed by a second procedure six weeks later to remove the silicone, as well as a cataract that had formed.

These stories reinforce a warning from experts that millions of people are at risk of sight problems, or even life-threatening conditions, if they fail to attend routine eye checks.

According to a State of the UK’s Eye Health 2021 report, commissioned by Specsavers in collaboration with leading eye health experts and charities, there have been 4.3 million fewer eye tests in 2020 – a 23 percent drop compared to the previous 12 months.

A further 235,000 eye hospital appointments were missed or delayed throughout the pandemic.

As a result, eye health experts are predicting a significant rise in vision loss and other health conditions in the months and years ahead.

According to the report, almost 3,000 people (2,986) are estimated to have already lost their vision due to delayed identification and treatment of eye disease during the pandemic.

And the number of people being referred with suspected glaucoma – known as the “silent thief of sight” – fell by 43,000 during March to December 2020, of which 2,600 would have been for urgent treatment.

The State of the UK’s Eye Health 2021 report is estimating a three-year wait to clear the backlog of missed appointments, which could result in an additional wait of 57.2 million days for eye surgery.

It is also predicted that the pandemic will add an extra £2.5 million to cost of UK sight loss and blindness between 2021 and 2024, in addition to an existing annual approximation of £36 million.

Specsavers also conducted research of 5,000 adults that found 15 percent have delayed having an eye test through a fear of being told that they might have a more serious condition.

And more than one in ten (12 percent) revealed gym classes were prioritised ahead of an eye test.

Concerns about the cost of an eye test, and subsequently glasses, has caused 27 percent of people to delay booking an eye test, despite 16 percent admitting that headaches or migraines have impacted their vision since the beginning of the pandemic.

While 17 percent of those polled, via OnePoll, suspect that they might already have an underlying issue they have yet to see an optician.

Giles Edmonds added: “Ahead of National Eye Health Week this month, I urge people to book their eye tests.

“They’re usually quick and straightforward, while also giving you the peace of mind that you don’t have underlying issues that could lead to any number of health issues.”

The full report can be read here.