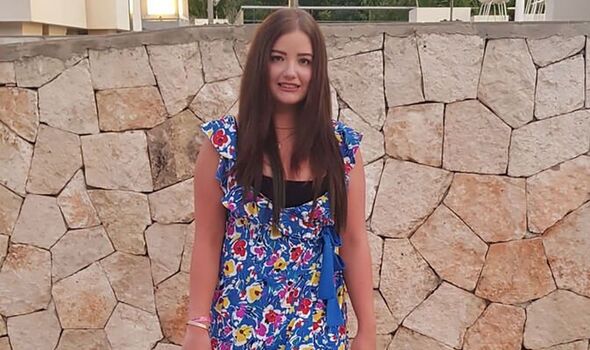 Laura Elizabeth Mahon first noticed something was wrong when she woke up and could not move her toes. The 29-year-old did not think about it much at the time, but her condition got progressively worse over the course of the week.

Laura told The Liverpool Echo: “I could no longer move my right leg and was struggling to walk.

“Over the following week, I was unable to feel much of my right leg.”

Laura’s GP believed her baby was pressing against a nerve and sent her to The Walton Centre for an MRI scan of her back.

But when the results came back clear she was sent for another MRI scan on her brain to make sure everything was okay.

Laura, from St Helens, Merseyside said: “I was told the devastating news that I had a brain tumour. They told me it had more than likely been there for years and years and had now started growing.

“It was such a shock, I’m only 29 and didn’t think something like this could happen to me. I was so focused on the baby, but I was getting more poorly.”

Laura was told by doctors that it was a very unique case and they wanted to monitor her before deciding what to do.

But when she became extremely unwell at 27 weeks pregnant, Laura and her husband Danny, 28, made the difficult decision to bring their baby daughter into the world at 30 weeks.

Laura said: “I couldn’t walk properly, I was being sick, and I was so tired. After many heart-breaking conversations, Danny and I made the toughest decision of our lives and decided to bring our daughter into the world at 30 weeks.

“At my planned caesarean section, the midwifery team put me under general anaesthetic so that I was totally relaxed.

“They didn’t want to put any pressure on my brain because of the risk of causing further complications.”

The baby was taken to the neonatal ward and placed in an incubator, but after suffering from a collapsed lung she was transferred to Royal Oldham Hospital to receive more specialised care.

Laura said: “I discharged myself from Warrington Hospital, even though I wasn’t really well enough, because I wanted to be with Sienna.

“Danny and I followed her to Oldham, where she was put in an incubator for a week. We weren’t allowed any visitors because of COVID restrictions. We really wanted our family to be with us, so it was very stressful for both of us.”

On December 9, Laura had an MRI scan which revealed the tumour had nearly doubled in size and she was told it was now inoperable because it was on her motor cortex, and it wouldn’t be safe to remove it.

Laura said: “They could only do a biopsy, but they were only able to remove around 20% of it.

“I was devastated because I’d got my hopes up. It was yet another setback, bad news on top of bad news.”

After receiving the results of her biopsy on December 22, Laura was told the devastating news she had just two years left to live.

Due to her prognosis, Laura and Danny, who had got engaged in April last year, decided to get married on January 6.

They registered Sienna’s birth the following day, and on January 8 she had her christening in a chapel at Warrington Hospital, where staff organised a party with food and presents.

Laura said: “Danny and I had prepared ourselves for the worst. We knew deep down what it was going to be but being told at 29 years old that you have inoperable stage 4 brain cancer and that I had just two years to live is something you can never prepare yourself for.

“Hearing that said out loud was a moment we’ll never forget.

“It felt so surreal, like I was living two separate lives. Things all looked fine, like we were a happy family, then I would remember how poorly I am.

“But it’s so special having Sienna with us, it’s like what we had originally envisaged.”

At the start of April, an MRI scan showed Laura’s brain tumour had stabilised, and had even shrunk a bit.

She said: “That was such a massive relief, and it was so nice to hear something positive.

“Right now, we’re trying to get out and do nice things to make memories together, but I need to take each day as it comes.

“It’s hard at times and I just break down and cry. But Sienna’s lung has repaired itself and she is completely fine now.

“I see others with GBMs who manage to live longer, so I am clinging to the idea that I might be one of those people.

“I’m fighting as hard as I can and I’m staying strong for my family.”

Brain tumours kill more children and adults under the age of 40 than any other cancer yet, historically, just 1% of the national spend on cancer research has been allocated to this devastating disease.

Brain Tumour Research is the only national charity in the UK singularly focused on finding a cure for brain tumours through campaigning for an increase in the national investment into research to £35 million per year.

It is also fundraising to create a sustainable network of brain tumour research centres in the UK.

Matthew Price, community development manager at Brain Tumour Research said: “We’re really grateful to Laura for working with us as it’s only with the support of people like her that we’re able to progress our research into brain tumours and improve the outcome for patients who are forced to fight this awful disease.

“Unlike many other cancers, brain tumours are indiscriminate. They can affect anyone at any time. Too little is known about the causes and that is why increased investment in research is vital.”

It also campaigns for the Government and the larger cancer charities to invest more in research into brain tumours in order to speed up new treatments for patients and, ultimately, to find a cure.