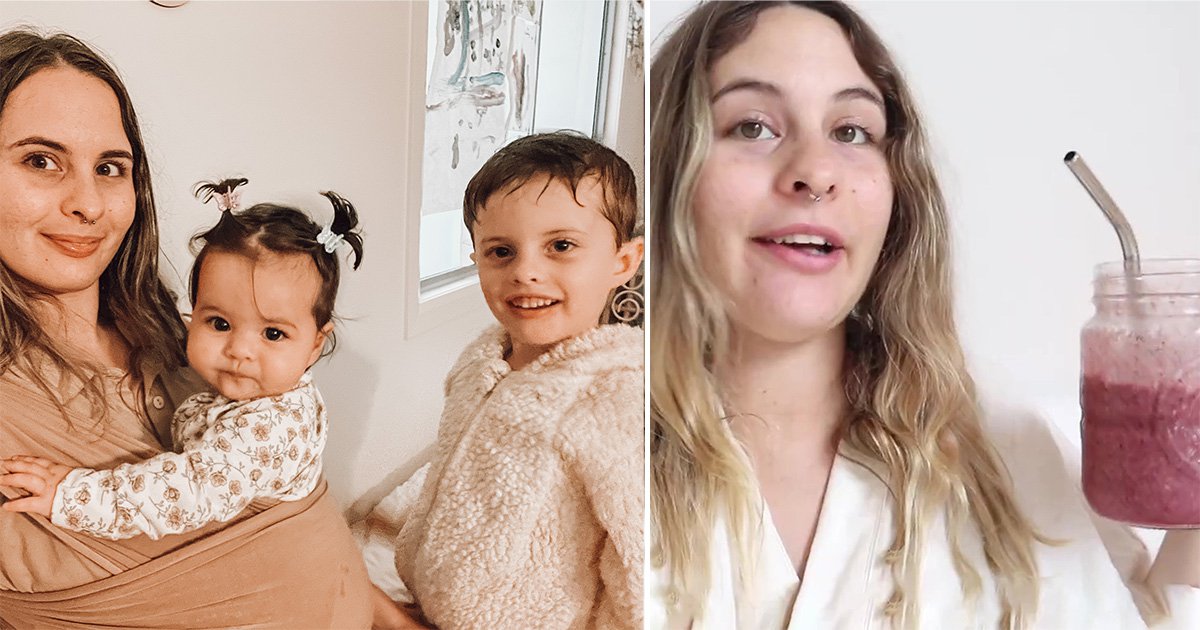 A mum of two has shared her top tip for postpartum recovery, claiming it has been a ‘life changer’.

While it may be controversial to some, Tiana-Rose, 24, decided to make a placenta smoothie following the birth of her second child, Arnhem-Sol, now six-months old.

Tiana-Rose and her fiancé, Luca, both tried the smoothie and said it tasted of cranberry.

Tiana-Rose had initially organised for the placenta to be professionally encapsulated after giving birth to her first child, Theo, now five.

However, they accidentally left it out too long, and it was no longer safe to consume.

Soon after, Tiana-Rose, from Golden Coast, Australia, began researching the health benefits of eating the placenta and came across people making smoothies using tiny cubes of their placenta after birth, with claims that it helped them with postpartum anxiety and depression.

Despite initial apprehension, she decided to give the ‘controversial’ method a go and froze the placenta after the birth of her second child and used tiny part of it to make smoothies, stating that it tasted like cranberry.

Tiana-Rose took to TikTok to share her concoction, where she can be seen drinking the smoothie. The video now has over one million views and 60,000 likes.

‘Honestly, you could not tell that there was a placenta in the smoothie – it was a really nice recipe, and I was very surprised by it,’ Tiana-Rose said.

‘My fiancé gave it a try, completely consented, and he had the same reaction, as he thought it tasted just like a cranberry smoothie.

‘We didn’t give any to the kids, but Theo loves a regular mixed berry smoothie, and he thought it was hilarious when I joked about a placenta being in there.

‘After we birthed the placenta into a sterilised bowl, our doula immediately started preparing it in our kitchen, as we had a home birth.

‘She cut it into two-centimetre cubes and popped them into an ice cube tray before placing them in the freezer.’

When it came to making their ‘nutritious’ drink, they followed a recipe from a book called The First Forty Days: The Essential Art of Nourishing the New Mother.

The recipe calls for a number of ingredients, including pomegranate juice, frozen mixed berries, yoghurt, banana, coconut oil, honey and a chia and flax seed mix, to be blended together.

Tiana-Rose swears by the smoothie, which she claims has helped her avoid postpartum anxiety or depression, stating that it has also improved her energy levels.

‘It was so funny, as when we Snapchatted our friends, they thought it was super gross and weird,’ she said.

‘But our online communities were all for it, with women sharing their positive experiences.

‘Some people were really caught off guard, and it developed the name of the ‘what smoothie’ – but others were super supportive.

‘I always knew the second time around this is something I would do, but I had heard about placenta smoothies and thought they would be gross.

‘However, as women swore by the smoothie, I was open to trying it, and I definitely felt energised on the days I had it – but was sluggish and tired on the days I didn’t.’

She is calling for other mothers to give the smoothie a try, saying that it’s important to nurture the body after giving birth.

In the video she posted on TikTok, Tiana-Rose can be seen with a glass of the smoothie with a straw in it, talking about its benefits. She even offers some to her toddler.

The caption on the video read: ‘We all drank the placenta smoothie! So many benefits.’

While some users were shocked by the drink, many were supportive and interested to find out more.

One person said: ‘That’s so scary to me, but I’d be willing to research more about it or listen if u wanted to share.’ [sic]

Someone else added: ‘For all of you confused, it’s perfectly normal for some people to do. Idk why it’s such a shock to some of y’all. And it is NOT weird people!’ [sic]

‘A lot of people eat their placenta, it has a lot of benefits,’ said another user.

‘That’s wild but good for y’all,’ commented someone else. [sic]

Tiana-Rose added: ‘I think in western culture, freshly postpartum mothers are expected to just jump back into it, but it’s so important that we use the first six weeks to recover and bond with our babies.

‘Slowing down made a world of difference in how I mother and nurture my body.

‘I would recommend mothers to try their placenta, whether it’s a smoothie or encapsulation.

‘From my own personal experience and women from all over the world, there’s been nothing but benefits.

‘Once you get past the gross association, it’s actually fine.’