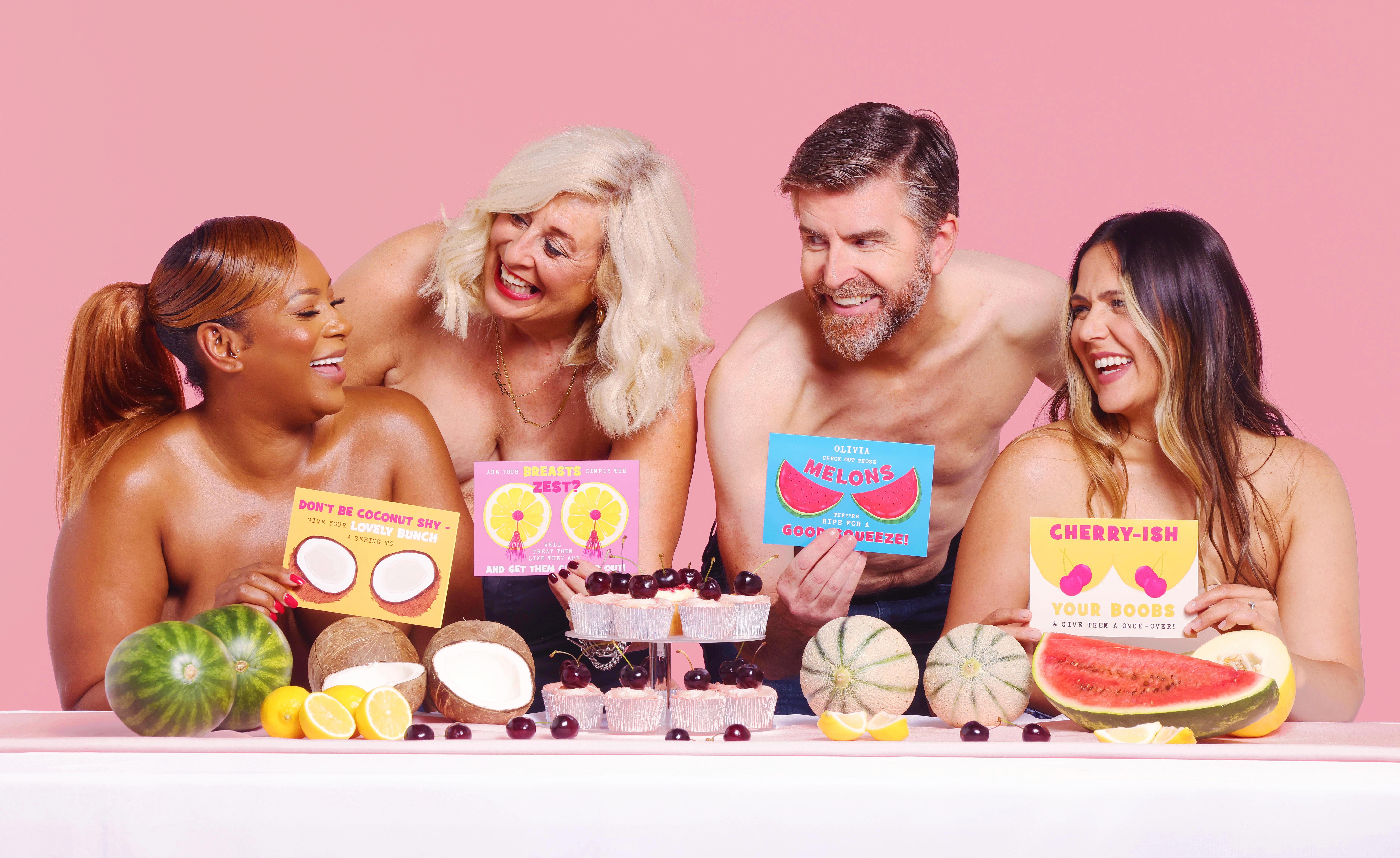 Moonpig has teamed up with four breast cancer survivors to demonstrate how self-checks can save lives.

The cheeky four-card range the survivors helped to launch is busting with puns to remind people to check their breasts.

In honour of Breast Cancer Awareness month the cards are free to send throughout the month of October using the code FREECHECK.

The four survivors bared all in a fruity photoshoot to launch the collection and are determined to use their stories to encourage others to get to know their bodies.

The cards have had fruits cleverly positioned as a pair on each card to look like breasts, forcing the viewer to look and check again.

The cards also feature a QR code, which goes directly to an easy to follow guide on how to check for the signs of breast cancer.

This is comes as more than 50% of women say they don’t know the early symptoms of the disease.

It’s estimated that one woman is diagnosed with breast cancer every ten minutes in the UK and while much rarer in males, around 350 men are diagnosed with the cancer each year.

The range is in collaboration with ITV’s Lorraine to support the Change + Check campaign, which was started after Lorraine’s producer Helen Addis was diagnosed with breast cancer in 2018.

Helen Addis, breast cancer survivor, Lorraine Producer and founder of the Change + Check campaign, said: ‘I remember chatting to my friends throughout my 18 months of treatment and was amazed at how many of them didn’t check their boobs.

‘I hope recipients of these cards not only check their breasts, but that they then send these cards to their friends and family so we can really get the message out there and ultimately save lives.’

The four breast cancer survivors in Moonpig’s campaign each had a traumatic journey of their own and are keen to share their stories to promote awareness.

Caroline Shaw, 54, who has been a fitness instructor and PT for over 20 years, found a lump in her breast while having a bath in 2016.

She went to her GP to get it checked and was sent for a mammogram and a biopsy. She swung by her doctors on the way to work, thinking nothing of it, but then describes being told it was cancer as like being ‘hit by a bus’.

Caroline said: ‘One of my biggest fears was telling other people. To me, cancer had a connotation of dying and very few positive stories were associated with the disease.

‘The daily fear and overwhelming thoughts of the cancer returning left me with anxiety and PTSD. If I had a headache I would convince  myself it was a brain tumour, or I imagined lumps that weren’t there.’

She opted for a double mastectomy and had small implants to reconstruct her breasts. Being self-employed, Caroline had no choice but to return to work. She was back training on the seafront with a blood bag under each arm, little to her clients’ knowledge.

‘People would often look at me, with my hair done and makeup on, thinking she couldn’t possibly have cancer, she doesn’t look like she’s struggling,’ she said.

‘Things aren’t always as they seem, which is why it’s so important you don’t get complacent with your own body either – regular checks can help save lives.’

Phil Alderson, 50, first discovered a lump when his daughter elbowed him in his left nipple. He remembers thinking to himself that ‘felt funny’ and found a small pea-sized mass on his chest.

Taking it seriously, but also not telling anyone, he decided to visit the GP. He underwent an ultrasound, biopsy and mammogram and at one point, had an overnight stay a day in the women’s unit.

Leanne Pero, 36, founder of the Black Women Rising charity, was diagnosed at the age of 30 just six months after her mother was diagnosed for a second time.

Leanne underwent eight rounds of chemotherapy and had a double mastectomy. She describes her cancer journey as a very lonely one. Many of her friends distanced themselves from her, finding her diagnosis and treatment too uncomfortable to bear.

Leanne said: ‘I also found professional support hard to come by – I remember going to a local support group and the facilitator asking ‘can I help you?’ in front of the entire group, thinking she must have been there for her mum. I was the only young, black woman in a room of white women – they just didn’t expect to see me there.’

She began writing blogs about her journey and the feelings of isolation. It wasn’t long before Breast Cancer Now picked these up and posted them. Hundreds of messages followed from women who felt similarly alone.

She set up Black Women Rising, a charity designed to support young black women going through cancer and has over 200 members.

‘There isn’t a day that goes by where I don’t think about cancer, or death, but it’s important that conversations on the subject continue,’ said Leanne. ‘My motto is “if in doubt, get checked out”, and I hope these cards will remind people to do just that.’

Hannah Gardner, 36, was diagnosed with breast cancer at 26. She discovered a lump in her chest at least 10cm in size and had no family history of the disease.

Sadly, at the age of 30, the cancer returned and she underwent a mastectomy on her left side. The cancer then came back a third time and she is now living with stage four cancer.

Hannah said: ‘My current diagnosis has resulted in a mindset change – treatment won’t finish for me, so I focus on life day-by-day.

‘I’ve also learnt to be kinder to myself – we’d never speak to someone the way you speak to ourselves at times. I’m also keen to encourage others not to sweat the small stuff and focus their energy where it best serves them instead.’