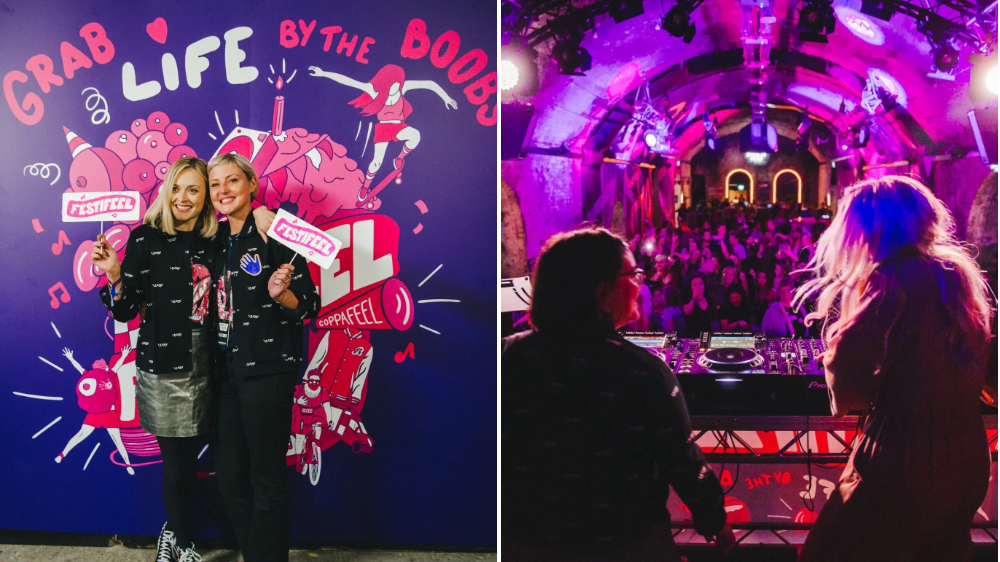 Next month, TV presenter Fearne Cotton will be curating a special festival alongside breast cancer charity, CoppaFeel! – and Metro.co.uk is hopping on board as its proud sponsor.

It’s the eleventh year Fearne, who is one of the charity’s patrons, has helped put on the event called Festifeel with CoppaFeel!’s founder Kris Hallenga, and this year they’re bringing in chart-toppers McFly as her headline act, as well as Radio DJ Adele Roberts taking a turn on the decks.

‘Festifeel is a really important marker in the CoppaFeel! calendar for everyone,’ Fearne explains. ‘Mainly because it is a chance to really celebrate and come together, and music is the perfect way to do that.

‘It brings people together in the same space, where they can let go, have fun and and dance – but always with an undercurrent message, which is to check your chest.

‘It’s a simple message but one that we all need to be told many times over, so it becomes a regular practice. And there’s no place like Festifeel to put that message into people’s minds.’

The charity CoppaFeel! was first set up in 2009, by Kris Hallenga and her sister Maren, after Kris was diagnosed with incurable breast cancer at just 23, after finding a lump in her breast at 22.

Unaware that breast cancer could affect people in their twenties and knowing very little about the disease, it struck Kris that there was very little information out there for young people liker her, so set about to change that.

Since then, CoppaFeel! has been educating people up and down the UK about the importance of early detection and checking your chest regularly, as well as having the likes of Greg James, Perrie Edwards, Gi Fletcher and Vicky Pattison join Fearne as patron of the charity.

Talking about the festival, Kris says, ‘I’m beyond happy that Festifeel is finally back after a miserable three year pandemic hiatus.

‘For our supporters it’s an opportunity to get under one roof and celebrate all things boobs and life, and for new people it’s a chance to get to know CoppaFeel!. For us, it’s to remember there are real humans out there, not just an “audience” on social media, who need to know what we do, and how we do it, and that we are actually really fun too.

‘Personally,’ adds Kris, ‘it’s also an opportunity to reconnect with why I started the charity in the first place and to see the joy that music and togetherness can really provide.’

‘We all come away from Festifeel with massive smiles on our faces,’ adds Fearne. ‘I’ve had so many beautiful moments over the last ten years, watching everyone come together and just feel happy – that’s why I love it so much.’

While this year’s event – which takes place at London’s Omeara on Sunday 18 September – sold out within hours, Metro.co.uk will being giving away three pairs of tickets to six lucky readers later this week.

So watch this space to be in with a chance to win!

To find out more about CoppaFeel! click here, but in the meantime, here’s three simple steps from the charity to get you started on your chest-checking journey:

Be aware of any changes in size, outline or shape and changes in skin such as puckering or dimpling.

Be aware of any changes in skin such as puckering or dimpling, or any lumps, bumps or skin thickening which are different from the opposite side.

Be aware of any nipple discharge that’s not milky, any bleeding from the nipple, any rash or crusting on or around your nipple area that doesn’t heal easily and any change in the position of your nipple.