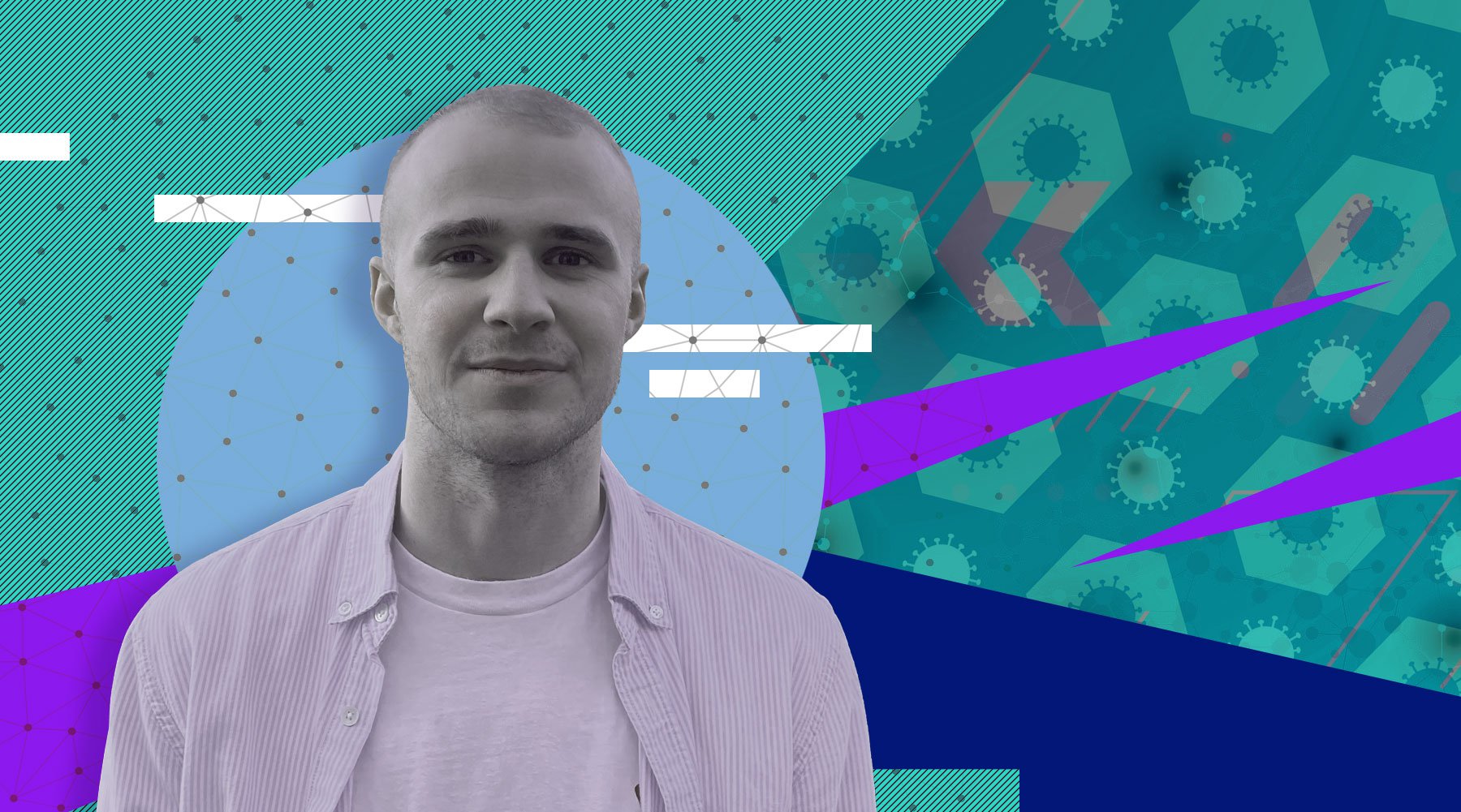 ‘In December 2020 I caught Covid and it turned my life upside down. I still haven’t recovered from it,’ Alex Bishop tells Metro.co.uk.

The 15 months since 24-year-old Alex first contracted the virus have been a rollercoaster of uncertainty, terrifying new symptoms and suicidal thoughts.

‘I have massive array of symptoms – dizziness and migraines are the main ones, but I also get tired very, very easily and have serious fatigue problems,’ says Alex.

However, he says the biggest battle has been the one in his head.

‘I have no shame in saying that there were times in the last year that I felt suicidal,’ Alex tells Metro.co.uk. ‘Exhaustion, seizures, chronic migraines and extreme anxiety dragged me to a darker place than I had ever been before.

‘It never got to the stage where I attempted self-harm, but, there was a time where I couldn’t stand on train platforms for the fear I might jump in front of one. The scariest thing of all, though, is that no one would know.’

He says the sense of isolation from his friends was one of the hardest things to deal with.

‘You’ve all been going along in life at the same pace, but I felt like I had suddenly fallen through a trap door,’ he explains. ‘Everyone else is moving on and I’m just stuck. Like someone pressed pause.

‘On top of the isolation, I was also in this intolerable cycle of pain and exhaustion. Pain, seizure, sleep, seizure, wake up, pain. That was it, all day, every day. I didn’t really know how to deal with it mentally.’

Alex had just moved to Spain to work as a teacher. He caught Covid just a few days after arriving. Alex, who now lives in Kingston, London, says he can pinpoint the exact moment he first felt something was wrong.

‘I was walking along the street to get a coffee and it just felt like I had been hit by some kind of wave or something,’ he reaclls.

‘I got really, really lightheaded. I was very dizzy all of a sudden and I felt like was going to collapse. I thought it was a hangover, but it wasn’t.’

Over the course of the next week, Alex felt drained of energy, hypersensitive to light and sound, he had migraine pain, dizziness and breathlessness.

Two weeks later, still feeling unwell, Alex went home to the Isle of Wight for Christmas and had to isolate in his room. That’s when things took a turn for the worse.

‘Weird things started happening,’ says Alex. ‘I kept feeling like I was going to pass out, I was dizzy and really breathless the whole time.

‘Then I started feeling these jolts in my body, like nerve pain or electric shocks -they were worst when I was trying to fall asleep. It’s that sensation when you feel like you’re falling and you suddenly jump. That was happening every five minutes, even when I was awake.’

It took ten months of Alex experiencing these debilitating symptoms for doctors to figure out what was going on. Alex was eventually told that Covid had attacked his vestibular system – the bit of the inner ear that controls balance. This was triggering an anxiety response.

A few months later, doctors found that Alex had had a brain hemorrhage.

‘It wasn’t caused by Covid,’ Alex explains. ‘It was from an accident a couple of years ago. I hadn’t had any symptoms after the accident, but old brain injuries can be woken up by a virus in your body – so Covid had triggered it.

‘This brain injury I didn’t even know I had then triggered epilepsy in that part of my brain. Which was actually the cause of the electric shock sensations I had been feeling – I had been having seizures.’

When doctors tested Alex’s brain they found he had four seizures over the course of one night. Alex’s epilepsy occurs in the front part of his brain, and as well as the electric shocks, it also causes nerve pain in his hands and feet.

Now incredibly unwell, and still having nightly seizures, Alex was forced to quit his job and move back home to his parents’ house permanently.

But even back in the UK, getting the medical support he desperately needed proved difficult.

‘I was told I could only be referred to see a neurologist by a GP,’ says Alex. ‘So I waited for six weeks, then I got a letter saying the first available appointment with a neurologist was five and a half months away.

‘It’s not only the physical toll of that, it’s also the mental toll.’

Alex decided to pay to see a neurologist privately, a luxury he knows many people in his position won’t have.

‘The thing I hear the most from doctors is, “we just don’t know enough yet”,’ Alex says.

It’s a scary thing to hear when your health hangs in the balance. Doctors tell him they think his symptoms should get better, that it is likely a post-viral condition, but they can’t give him many solid assurances – or even a plan of action going forward.

‘Apparently my lungs are now clear, but it is the neurological symptoms that doctors are trying to get on top of,’ says Alex.

‘For the first time in a long time, I have actually seen improvement in the last six weeks – that’s from finding the right medication. But in terms of a timeline, there is literally no way of knowing – and I got it 15 months ago.’

In an effort to spread awareness about the realities of living with Long Covid, particularly among younger patients, Alex is candidly sharing his mental health struggles through blog posts. He says it helps to be able to simply share the links with his friends, rather than having to have awkward conversations.

‘If you say to a room of people, “I had brain hemorrhage”, it kind of silences the room,’ says Alex.

‘It feels like I’ve gone to hell and back. I was in the worst place I’ve ever been mentally, because the impact in your life is a totally invisible. People don’t see what I’m going through.

‘I can’t exercise because it makes my symptoms worse. I can’t work. I have chronic pain in my face from the migraines. I can’t go out and socialise with my friends because my brain can’t deal with busy environments. I can’t drink alcohol.

‘It gets to the stage where you’re just like – what do I have left? Because there’s just nothing. You can’t really do anything. You just exist.’

Research has found that there is a ‘high mental health burden’ for patients with Long Covid.

A 2021 study of 1,050 adults found that in patients with Long Covid, 13.8% and 10.5% screened positive for depression and PTSD respectively, nine weeks after being discharged from treatment for the virus.

This is something Alex has experienced first-hand. He says the combination of his physical and mental symptoms has caused him to lose his sense of identity.

‘I don’t really know who I am anymore,’ he tells us.

‘Initially, I think I completely disconnected emotionally from the situation. Then, around eight months in when it all got too much, I ended up going to see a counselor.

‘Until I saw them, I hadn’t even considered what I’ve been through as trauma. But my counsellor was like, “Look, what’s happening to you is really bad.”‘

It’s the lack of support that Alex wants to tackle. He was lucky to be in a position to pay for private medical care and mental health therapy, but not everyone has that privilege.

‘The support out there is pretty much non-existent,’ says Alex. ‘That’s why I started sharing my story – I want to see if there are other people out there like me.

‘Being able to laugh anything off has always been a helpful attitude for the minor things in my life. But, when something serious comes along, the wheels come off.

‘If you’re struggling, speak to a friend or a parent. If you don’t want to discuss it with them, speak to a therapist or your GP. Health conditions don’t just make you ill, they turn your entire life upside down. You do not need to do it alone.’

Long Covid – what you need to know

Most infections with Covid resolve within the first four weeks. Long Covid is a term commonly used to describe symptoms that continue or develop after you’ve had the initial virus.

An estimated 1.5 million people in the UK (2.1% of the population) have reported experiencing Long Covid symptoms.

The recovery time is different for everyone. The length of your recovery is not necessarily related to the severity of your initial illness, or whether you were in hospital.

According to the latest reports, Long Covid is most common in people aged 35-69 years, women, people living in more deprived areas, those working in health care, social care, or teaching and education, and those with another activity-limiting health condition or disability.

If new or ongoing symptoms do occur and they are causing you concern, you should always seek medical advice and support.