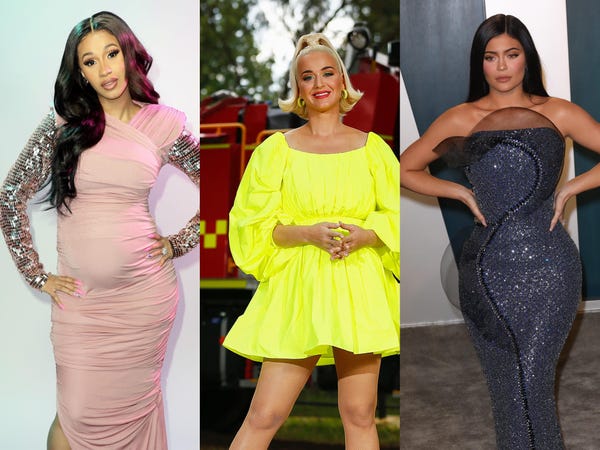 In the past, pregnant celebrities were expected to only grow a slight bump and were derided if they gained the recommended amount of weight, or even just a few extra pounds, in the process. Right after having a baby, famous mothers were to return to having flat tummies and slipping into size 2 jeans.

While that still happens in Hollywood, many celebrity mothers are also breaking through taboos, sharing the challenging, and unavoidable, elements of pregnancy.

Katy Perry, who gave birth to a daughter, Daisy Dove, last month, was refreshingly open about the realities of pregnancy. She talked about her weight gain and how her body experienced swelling toward the end of her pregnancy.

Read about seven other celebrity mothers, including Kylie Jenner and Cardi B, who shirked expectations and shared intimate details about about what they endured.

Katy Perry talked about her weight gain while pregnant. 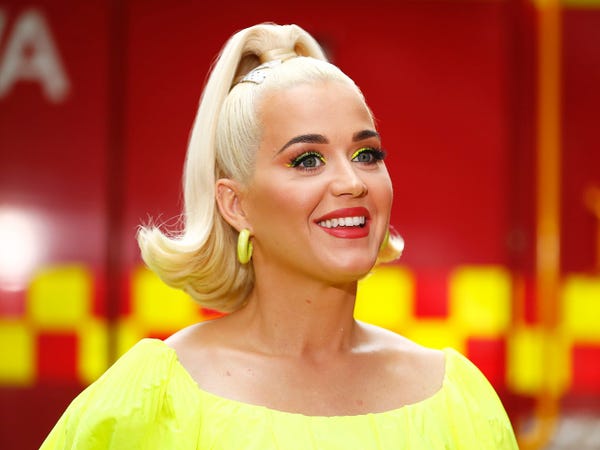 In July, with about a month left to her pregnancy, Katy Perry talked about her weight gain and appreciation for her body in an interview with "Kyle and Jackie O," an Australian radio show.

The "Roar" singer said she weighed 190 pounds at that point. In 2011, Perry told Elle Magazine that she usually weighs about 130 pounds.

It's typically recommended for women to gain between 25 and 35 pounds during pregnancy. The recommendation is higher for women who start out underweight.

"I'm really grateful for my body," Perry said in the interview, "and I have so much respect for other women going through this process."

Chrissy Teigen marveled at the 'sh-t' that comes with a third pregnancy. 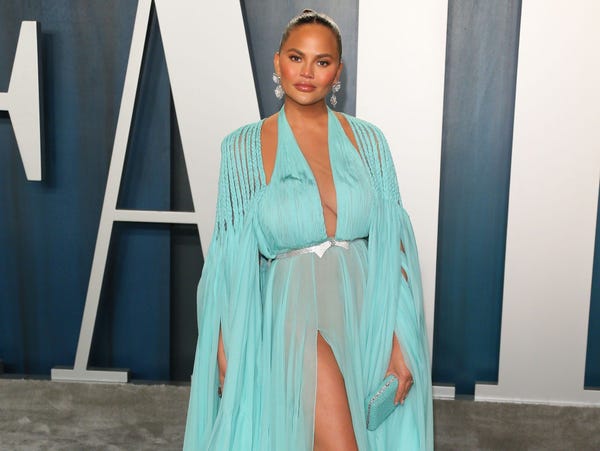 After the birth of her second child, Chrissy Teigen was  shared how grateful she was to not have torn her butthole during her delivery, the way she did with her first.

Now pregnant with her third child, Teigen shared a video on Twitter last month of her growing bump and said: "Look at this third baby sh-t." While Teigen could've been referring to anything, she was likely pointing to the fact that after subsequent pregnancies, a woman's belly is likely to "pop" earlier on.

Kylie Jenner said that pregnancy is 'not a joke' and is 'hard.' 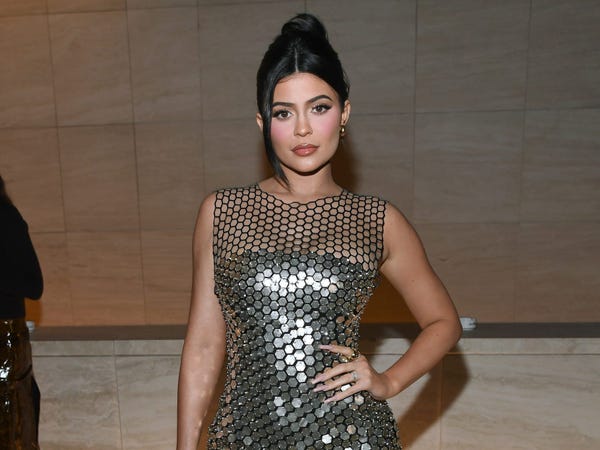 Kylie Jenner managed to keep her pregnancy with rapper Travis Scott a secret, but has talked about her feelings about her daughter, Stormi, since her birth in 2018. When she announced the news in February 2018, the beauty mogul said it was a "beautiful, empowering, and life changing experience,"

In April, Jenner also said she's not in a rush to have another baby soon since the experience took a toll on her. "Pregnancy is just not a joke," Jenner told Harper's Bazaar, "it's a serious thing and it's hard."

Cardi B struggled with depression, fatigue, and was concerned about her career while pregnant. 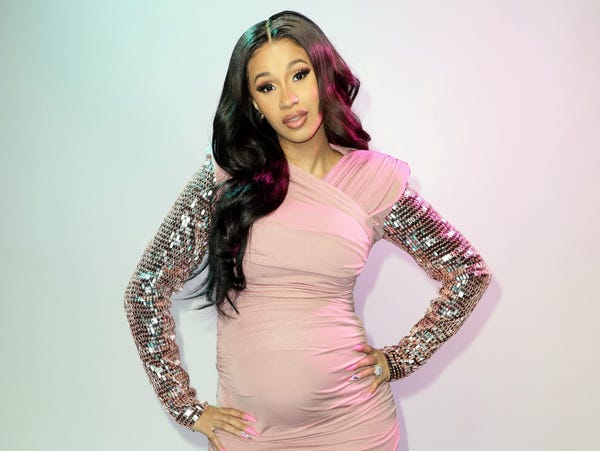 Rapper Cardi B revealed on Twitter last year that while she was recording her hit album "Invasion of Privacy," she was struggling with her pregnancy. She was dealing with nausea, vomiting, relentless colds, and fatigue — all common symptoms of pregnancy.

She said she was also facing depression, which affects about 7% of pregnant women. On top of that, she had serious concerns about the fate of her career. Pregnancy discrimination, and discrimination against mothers is also common in the workplace, and is likely even more pervasive in Hollywood.

"All I [could] think about was … everybody is disappointed in me, am I still going to have a career after this baby?" she said. 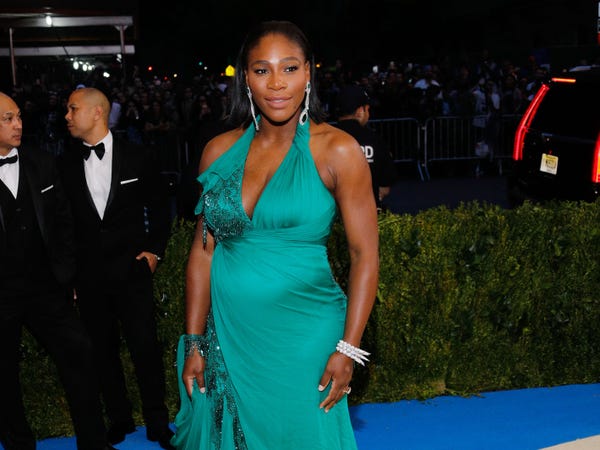 Tennis legend Serena Williams won the Australian Open early on in her pregnancy in 2017, but later on, she experienced serious health scares.

Because Williams had previously been hospitalized with bilateral pulmonary embolisms, she had to inject herself daily with anticoagulants to help prevent developing blood clots, which was "the most dreaded part of her daily routine," Williams told Vogue.

Williams nearly died after giving birth to her daughter in 2017 and is now a vocal maternal health advocate. 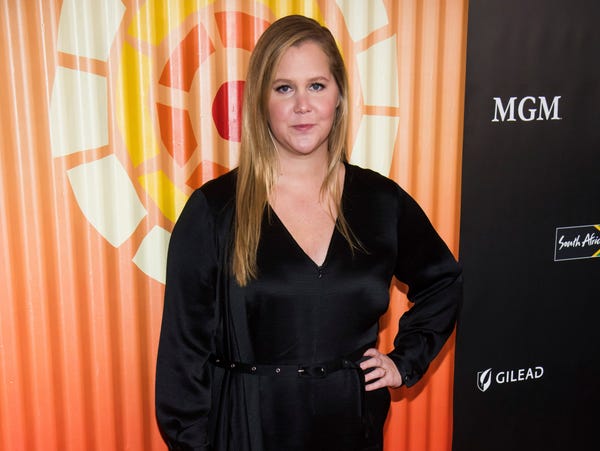 Throughout her pregnancy with her son, Gene, comedian Amy Schumer struggled with hyperemesis gravidarum, a rare condition that leads to persistent vomiting, nausea, and dehydration.

To break through the taboos around the condition, and pregnancy in general, the actress documented herself vomiting, and dealing with other stressors, while she was expecting for her three-part docuseries, "Growing."

"I don't resent being pregnant," Schumer said in the first episode. "I resent everyone who hasn't been honest. I resent the culture of how much women have to suck it the f–k up and act like everything is fine. I really resent that."

Jessica Simpson shared an up-close shot of her severely swollen feet while pregnant with her third child. 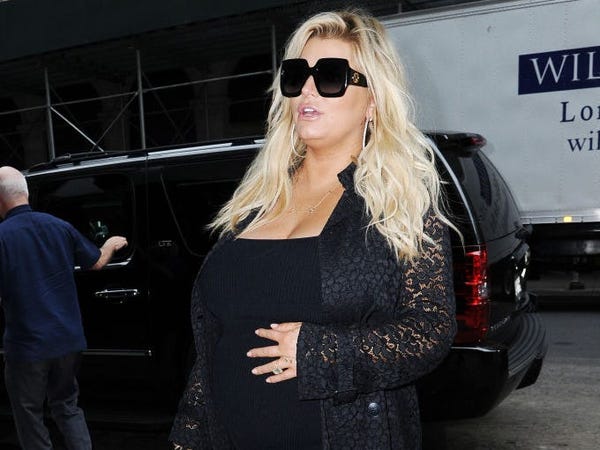 When people were participating in the popular social media "10-year challenge" last year, posting photos of themselves a decade apart, Jessica Simpson used the trend as an opportunity to talk about a common and uncomfortable pregnancy symptom she experienced while expecting her third child.

On the left, the singer shared a photo, shot from the waist of down, displaying her signature toned legs. On the right, Simpson posted a picture of her severely swollen left foot. Because the body retains more fluid while pregnant, it's common to experience swelling in the ankles and feet.

Ashley Graham highlighted her stretch marks early on in her pregnancy. 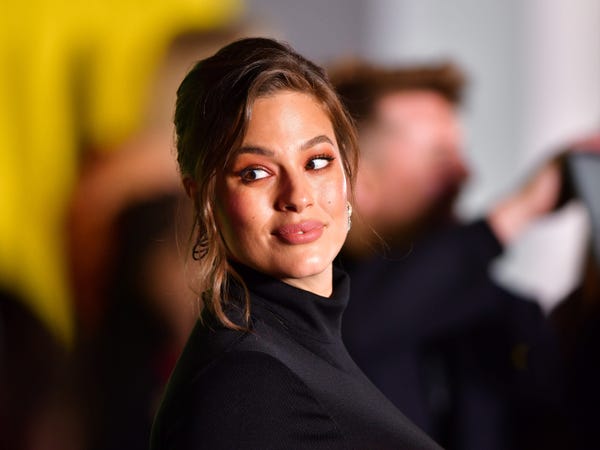 Ashley Graham, a model who fights for inclusivity, used her pregnancy as an opportunity to push for acceptance and appreciation of all body types.

Early on in her first pregnancy last year, Graham shared an intimate photo of her body that conveyed her stretch marks. "Same same but a little different," she wrote in the caption.