“If it terrifies you, you have a responsibility and a way to do that thing.” That’s the lesson Jaime King learned after years of battling endometriosis and PCOS (polycystic ovary syndrome) without opening up about her truth. Well, the actor, activist and entrepreneur eventually shared her story, and continues to relate to and help women everywhere by not hiding her personal health journey. King sat down for a candid chat with motivational coach Angela Davis alongside wellness blogger Lee Tilghman at #BlogHer Health 2019 in Los Angeles and got real about what gave her the courage to reveal what she had been through in the most authentic way possible.

“The way that it started was I was diagnosed with endometriosis and PCOS when I was 20,” King explained to the audience, when asked why she decided to use her platform for good. “And I went undiagnosed for a really long time. I lost my first baby at that age. And I continued to miscarry and miscarry and it took many years for me to have my first child and when I was going through this I cannot explain what it felt like — that this one thing that we’re told as women is that our gift is that we can carry life and all of a sudden someone says, ‘Oh, maybe that might be in question.’”

Be Happy. Let go of the story, the blame from others or that you have put on yourself. Forgive. Let go. Let the New Year be NEW. ?

King welcomed her first child, son James Knight, in 2013. But even though she was able to conceive and give birth to a healthy baby, the stigma she felt surrounding how she got to that point didn’t disappear overnight.

She went on, “When I had my child it was all over the press and all over the news, I just felt like it was missing something. It was just this happy perfect… bullshit. It’s not like my family wasn’t perfect, it’s just that the journey that it took to get there nobody knew about. So that’s when I wrote a long essay that this was the truth about the journey to have this beautiful child.”

With her friend and fellow endo-sister, Lena Dunham, supporting her, King decided there was a necessity to make her struggle public. But that didn’t mean she wasn’t scared. Or, to put it in her words, “terrified.” As it turned out, getting real about her health with her fans and followers was all worth it because she realized she wasn’t alone. And that’s what motivated her to keep going.

“It was amazing, the response, because it went from a world from where nobody was talking about this thing to thousands of thousands of people responding back about their experience,” King notes, adding that she had a particularly moving encounter with the husband of an endometriosis sufferer almost immediately after she wrote about what she had gone through.

“A man came up to me and he’s holding this plate and he’s kind of shaking and he just burst into tears and I was like, ‘Oh, God, are you OK?’” King recalls. “And he said, ‘My wife and I were about to separate and she read something you posted last night and she didn’t walk out the door.’ And the reason why they were about to separate was because she had the same thing.”

Tilghman also knows that sun-kissed Instagram selfies and cute, artistically-styled photos of lunch don’t always paint the real picture of what someone is dealing with.

“It was just smoothie bowls and salad,” the recipe-developer and wellness writer behind Lee From America said of her humble internet beginnings. “That’s what I thought what health was.”

As Tilghman’s work gained traction and she became a bonafide health blogger — something she didn’t set out to do intentionally — she was actually struggling with PCOS, a condition she refers to as a “silent autoimmune disease.” She grew facial hair, her periods were heavy and she could barely get out of bed. Of course, she still was hit with internal pressure to look happy on social media, take smoothie-drinking selfies, stay motivated in the public eye and engage in self-care activities like baths. (“I took so many baths with PCOS, let me tell you… it didn’t do shit,” she laughs.) 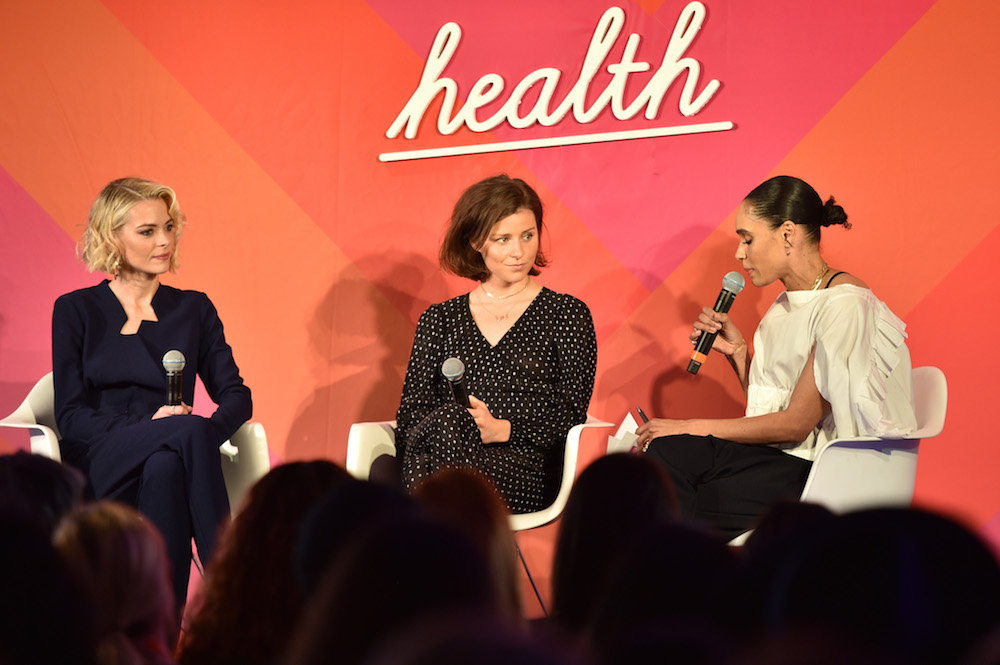 King, Tilghman and Davis are all in agreement that women have been conditioned to put their best face forward, even in their darkest moments.

But the days of smiling on the outside only to keep up appearances are over in these women’s eyes. Opening up conversations about the taboo and the uncomfortable and leaning into our femininity is the next step. King’s hope is to pay it forward to other people trying to take care of themselves, considering she went to nine doctors before she received a proper diagnosis.

“There’s something I love about women so much that I don’t want to hold anything back from them,” she says.

We applaud King for using her platform to uplift her community and promote honesty. Never underestimate the power of using your voice — especially when it comes to being an advocate for your own health.