Trying to get your kids to sleep can be a special kind of torture. We can handle all the challenges and responsibilities of adulthood but when your three-year-old refuses to listen to reason, reward or Bach for babies, it can break you.

If sleep time is extra challenging for your kids right now, regardless of their age, you’re not alone. 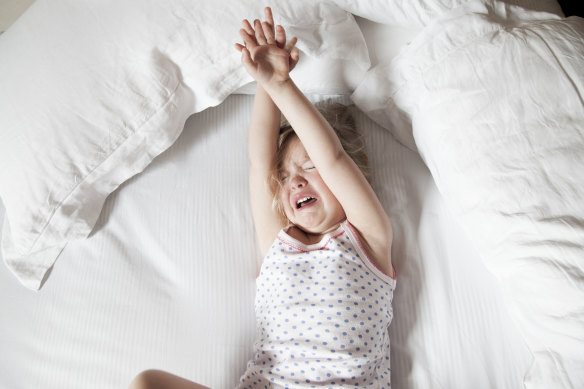 When I ask Dr Chris Seton, a paediatric and adolescent sleep specialist at the Woolcock Institute if he sees more problems in children as the days get longer in the lead-up to the Summer Solstice (the longest day of the year on December 22), he laughs.

As daylight savings kicks in, and our external rhythms of life become misaligned with the time our biological clock and rhythms have adjusted to, it can make us feel jet-lagged. Then add in extra-long days when the sun is still up even though our body’s clock is saying ‘it’s sleep time’.

For children, these changes are more problematic.

“The practical problem with them is that their sleep pattern doesn’t shift. So, if you or I, or teenagers go to bed later, we compensate by sleeping in, but little kids don’t sleep in,” he explains.

“Circadian rhythm shifts have a downstream effect on performance, mood, behaviour, and social interactions,” she adds. “They are more impacted by that because they haven’t got skills that we adults have.”

So, what are parents to do?

The more important point here may be what parents should not do.

Frustrating as it can be, anger and threats are one-directional: they have to keep escalating to have any effect.

Additionally, when we or our kids get upset or emotional around bedtime, we become more wakeful because we get surges of dopamine, adrenaline and cortisol, Seton explains.

“Being upset at bedtime is not good,” he stresses.

Apart from bedtime disputes, the other misstep many parents make is trying to put their child to bed too early and, at this time of year, it is often too early because it is still light.

It is hard for kids to go to sleep when it is still light outside and when there is growing excitement along with a change of rhythm, for many, over the holidays and Christmas. The Molotov cocktail in that mix is that when kids are overtired they often become hyperactive, which drives neurochemicals that keep them awake, despite their exhaustion.

Instead, Seton suggests going “somewhat free-range” with their sleep across December and January.

Then gradually work back towards an age-appropriate bedtime. So for kids whose normal bedtime, is 7.30 and shifts to 8.30 in summer, from February you might shift it back to 8pm and then gradually back to 7.30.

“And then the advantage then is the days getting shorter… and because it’s dark earlier your problems are gone.”

Well, some problems at least – Seton says that with more respiratory infections in the colder months, he sees more children with snoring issues in winter. A dark, cool, quiet room and setting a sleep training clock a little later than it is, can also help: “By adjusting the clock, little kids can actually think they are going bed a bit later than they are.”

For those with teenagers, summer sleep problems can be a “perfect storm” because they tend to have a later body clock; then daylight savings and long days of sunlight making them sleep even later; they are often sleep-deprived because school hours in Australia don’t compensate for these facts (Seton says some states in North America have legislated 10.30am start times in response to the mountain of evidence that teenagers are suffering because their circadian rhythm and school rhythms are misaligned); and many are experiencing burnout from too much homework and too many extracurricular activities.

“We’ve done a few experiments at a few private schools in Brisbane where you reduce the amount of study and extracurricular stuff and concentrate on sleep requirements,” Seton says. “And we’ve demonstrated that academic outcomes get better, as do sporting outcomes.”

Blunden says many of the conversations she has with parents of teenagers suffering sleep problems revolve around: can we let our kids sleep in on the weekend? We can have them sleep in late in the morning when it’s holidays.

She says that a late night here or there won’t hurt and sleeping in slightly later on the weekend or summer holidays won’t hurt either, but given Australian schools start early (for teenagers at least), they may pay a price if they sleep in too long, too often.

Their rhythms will be out of sync with school, so they will feel “out of whack and exhausted”, when they return. So, if they are not waking up till 9am on holidays, then they need to spend a couple of weeks before school starts incrementally shifting their wake time earlier to readjust, she says.

Sleep right now can be a challenge, Seton and Blunden admit, but they both urge parents to try not to make it a battle. The peak of summer is nearly here, after which some of these issues are likely to resolve themselves naturally. And if they don’t? There are always sleep specialists who can help.