When you’re feeling poorly, the last thing you want is an excitable puppy trying to lick your face all day long.

But sadly, that was all I was getting with Clive, my little cocker spaniel. In October 2012, when he was six months old, I was diagnosed with Addison’s Disease – a rare, chronic condition where your body doesn’t produce enough cortisol.

It had robbed me of energy and put me in the hospital multiple times for six years.

When symptoms started, I had no clue what was going on. If I had a tummy bug, it’d take me a long time to recover. I was more susceptible to colds and flu and my blood pressure was always quite low.

I was passing out often and felt very lethargic, sometimes sleeping up to 18 hours a day. I’d have regular iron and blood transfusions to help and they’d keep me going for a little bit, but nothing was fixing the issue or telling me what was wrong. My symptoms were so generic that no-one could pinpoint what was happening.

Eventually, I got referred to an endocrinologist, who tested me for Addison’s Disease. It’s so rare that he even said that he was 99.9% sure that it’d come back negative – but the diagnosis came back positive. I was immediately put on steroids and told I’d have to take them for the rest of my life.

At first, they seemed to help – I felt better.

But it was like a placebo effect; after about a week, I was back to feeling ill again. My body continued going into crisis – a state where my cortisol level dropped to a dangerous point, and would leave me feeling weak and needing to go into hospital urgently. There was no way of knowing when I’d need to take extra medication until it was already too late, so I was constantly on edge.

It got to a point where I wasn’t leaving the house. I’d lost all my confidence; if I was feeling unwell outside of home, it was hard to get people to help me, or to take what I was feeling seriously. So eventually, I just stopped going out and resigned myself to life within the four walls of my home.

Things were tough and something that wasn’t helping was the fact that Clive wouldn’t give me a moment’s peace. He’d follow me around, trying to get my attention and was constantly yapping and trying to lick my mouth. I loved him, of course, but I was finding it hard to bond with our new puppy – he was just obsessed with me, and I didn’t have the energy for it. 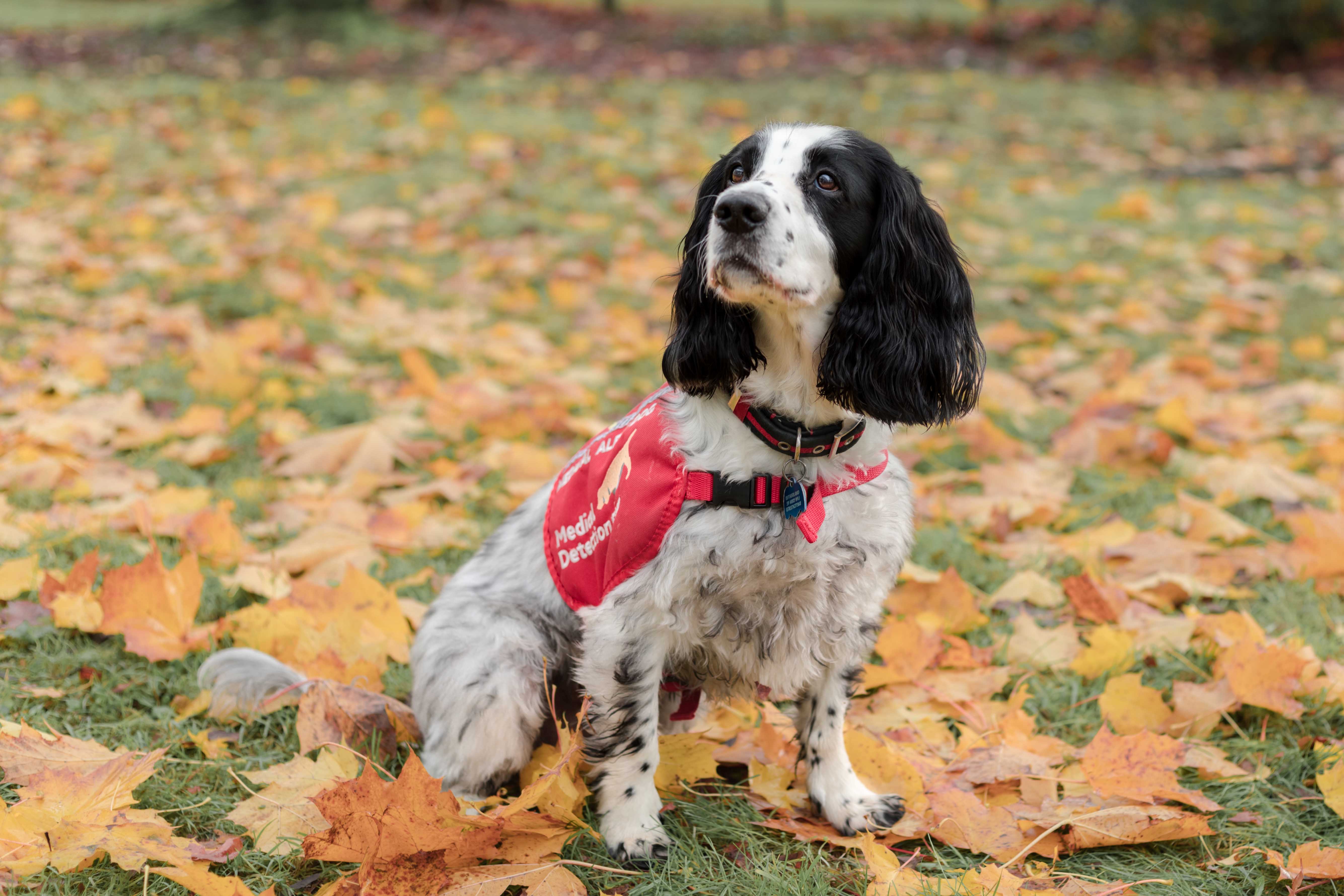 My husband was desperate for us to feel some joy again, so he suggested that we got tickets to go to see Crufts – we both love dogs and he thought it’d be a nice reason to have a break from the house. I agreed, and we went along.

When we were browsing the stalls, I got speaking to the CEO of Medical Detection Dogs, Dr Claire Guest. I’d never heard of the organisation before, and was fascinated to learn that they helped to train dogs to assist people with conditions such as type 1 diabetes.

I didn’t consider for a moment that they could help me out – I was thinking more of what they could possibly do for my mum, who is diabetic. But to my surprise, one of the leaflets included a part about how a dog had been trained to help a person manage Addison’s Disease.

I asked more about it, and told Dr Claire about my own dog, Clive. I told her how he was behaving with me, and my condition, to which she said something very promising:

‘I think we might be able to help you – and I think we can help you with your own dog.’

She encouraged us to fill out an application form when we got home, putting Clive forward for an assessment for training. In the meantime, she advised me to take some medication every time Clive was hyperactive with me, give him a reward, and then note down how I was feeling afterwards.

I’ll admit: I was sceptical at first. Clive’s lovely, but he’s just a dog. I thought, ‘how can a dog save my life?’

But I followed Dr Claire’s instructions anyway: I took medication in the morning, and then whenever Clive would be particularly clingy to me, I’d take some more, and then he’d back off. When he came back later, I’d do the same.

I wasn’t taking masses of extra medication, but now I was actually feeling better, as if it was directly responding to changes in my body, rather than me taking it as part of a fixed schedule like I was before.

Clive could sense when my body needed the steroids, and told me before it reached critical levels.

We began the official process of getting Clive properly trained up soon after. He started attending obedience classes, and we started to understand each other. Soon, I realised I’d gone a month without needing to call the ambulance, which was a massive achievement.

Then, it had been a couple of months since I last went to the hospital. Slowly, but surely, my confidence was starting to rebuild.

One year later, at age two, Clive was fully accredited as a Medical Alert Dog. He’s now been trained for seven years, and apart from me having a reaction to my Covid vaccine, I’ve not been taken back into hospital for a crisis – and that’s all down to Clive.

He stays by my side, and tells me exactly when I need to take my medication, day or night.

He’ll jump, and will try to get to my mouth. If ever he can’t reach my mouth, he’ll become really disobedient and act out. It’s very out of character, because he’s actually not a naughty dog – so I’ll know what’s going on immediately.

At night, he’ll jump on my side of the bed and wake me up. His alerts are so strong, they’re impossible to miss.

Because he helps to keep my health stable, I can do the things I love again – I have a very busy job as a logistics officer for Humberside Police. It’s great, but it would be impossible if my body was constantly going into crisis like before. Clive will just lay under my desk as I work, and jump up onto my lap when it’s time.

My husband and I go out to restaurants, to shows in arenas with tens of thousands of people, and on city breaks, all with Clive by our side – he’ll just sit quietly, and only cause a fuss when he needs to tell me something.

I can’t believe how far our journey has come: at the start, I thought Clive’s intense focus on me was simply annoying. But, because of his perseverance, we are where we are today, and I’m so grateful. I trust him with my life.

As much as I pushed him away, he kept coming back. I regret not being able to bond with him from day one, and I wish I could have that time back all over again, because I’d be devastated without him. He’s my little knight in shining armour.

I’m so glad I came across the Medical Detection Dogs stall at Crufts that day. Not only do I have the best relationship with my dog, but he makes it possible to manage my health and live something of a normal life.

Without them, I probably wouldn’t be here. I had no idea things like this existed until I saw the stall; I really hope that telling my story can help change someone else’s life in the same way.