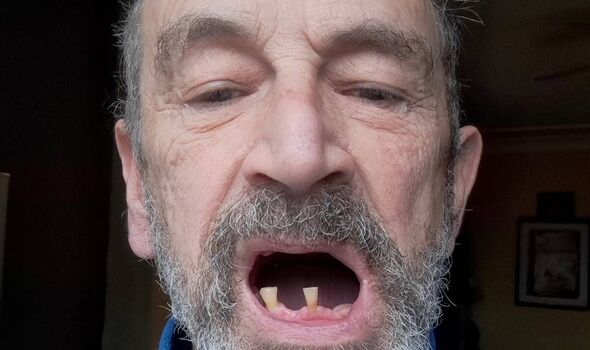 “In the four years or so where I have not had a dentist, I have had to extract my own teeth. I have a little jar here and there are 11 teeth in it and they are all the teeth I have extracted myself over the four years.

“I just can’t get anyone to look at my teeth.”

The NHS advises against self-treatment, asking people in need of help to call the NHS 111 number or a local dentistry practice.

NHS dentistry will become a thing of the past by 2025 unless there is a radical reform to funding, the chair of the British Dental Association warned last night.

His comments came as new figures show as many as 9 in 10 dental practices are now refusing adult NHS patients for treatment and 1 in 10 local authorities are no longer accepting under-16s for health service treatment.

The figures are part of a dossier of evidence being collated by the BDA that will be submitted to a Health and Social Care Committee inquiry into dentistry which launched earlier this month (DEC) into the scale of the NHS dental crisis.

The lack of NHS appointments has led people to drive hundreds of miles in search of treatment, pull out their own teeth without anaesthesia, resort to making their own improvised dentures and restrict their long-term diets to little more than soup.

In other cases children are being prescribed numerous rounds of antibiotics and left waiting for months for tooth removal surgery, patients are visiting overstretched GP’s and [email protected] departments to find help, and deadly mouth cancers are going unchecked.

The BDA says the government is only providing about 50 percent of the funding needed for dental practices to care for every patient, meaning that half of the population is being left without an NHS dentist.

The problems say the BDA were “aggravated by two lengthy lockdowns” which led to 47m lost NHS dental appointments in England alone. The BDA research shows this includes over 14m for children.

The BDA has also uncovered dental shortages “dental deserts” in large swathes of the country – including Suffolk and Liverpool where no NHS dental practices are taking on new patients. It found only 2 percent of dental practices were accepting NHS patients in the south-west, north-west and Yorkshire, and the Humber regions.

It found this is a more serious problem in more deprived areas. For example, in Bradford, a third of five-year-olds have visible signs of tooth decay. Children born in the city are eight times more likely to be admitted to hospital with dental decay before their sixth birthday.

Eddie Crouch said: “NHS dentistry is not fit for purpose. The amount of money that is given to remunerate dentists is inadequate and has fallen by 30 percent in real terms over the past ten years due to increased costs and inflation which means dentists are increasingly leaving the profession or turning to private work.

“It is shocking the NHS system has been abandoned to a slow death and unless there is a radical change and investment there will be no routine NHS dental services within the next two years.

“Within the next two to three years NHS dentistry will not be there to reform and we will be left with a small service for a few people – mostly those with emergencies.”

Professor Liz Kay, President of the British Dental Association said: “Every MP’s postbag is groaning with thousands of complaints from constituents with nowhere else to turn. Tooth decay is not an equal opportunity affliction. Its prevalence in poorer households is higher than in wealthier ones.

Hence, those who need dental services the most are those who are least able to afford private care.

“In parliamentary debates, MPs have recounted distressing stories of children not even owning a toothbrush, let alone toothpaste.

“Dentists see the grim consequences of this, or would do if patients could access them.

“Preventative measures such as brushing, fossing and even chewing sugar-free gum can help prevent tooth decay, but these need to work in tandem with regular check-ups by accessible NHS dentists. Oral health and pain relief cannot be left to the mercy of the market. Urgent steps are needed to bring NHS dentistry back from the brink.”

She added: “Government has under-reacted for too long. If change doesn’t happen fast, in the words of one MP we will see “a multitude of dental deserts turn into one large Sahara.”

At the launch of the NHS dentistry inquiry, Steve Brine MP, chair of the Health and Social Care Committee said: “People resorting to DIY dentistry, even taking out their own teeth without anaesthetic or medical care are stories that should belong to another era yet such events are reported to be happening here today.

“Perhaps it’s not surprising when research shows that some parts of the country have become dental deserts and 90 percent of dental practices have turned away adults wanting to sign up for NHS services.

“We’re launching an inquiry to ask why dental treatment is so difficult to find and to establish what the government and NHS England must do to improve access and reduce such unnecessary pain and suffering.”