My partner and I entered into our relationship as equals. Then we had two babies, and along the way I became the keeper of times, the packer of bags, the buyer of clothes, the planner of meals, the tracker of milestones, the organiser of weekends, the booker of appointments, the emptier of dish racks.

Every morning my partner would ask me the weather forecast. And every day, I knew – like the Bureau of Meteorology app in live female form.

This was never part of the agreement. 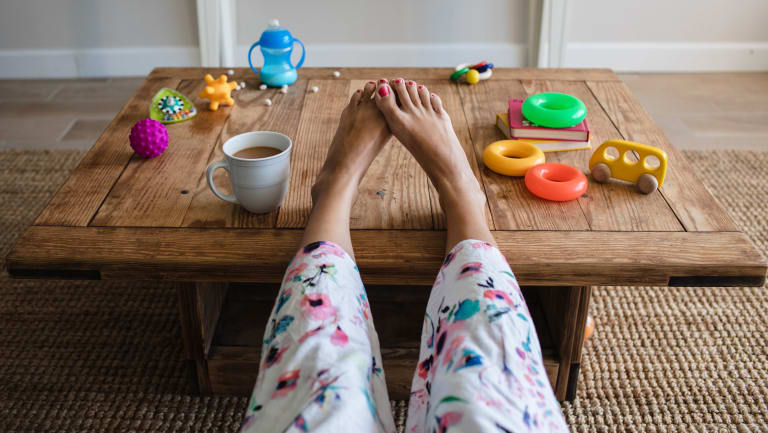 Every task I was trying to forget would need doing
eventually, and I began to despair.

This chasm between the home life I expected and the one I got is not unique among women. It was making me furious. And I was done with it.

I decided to stop. For one week. This did not mean swirling merlot or painting my nails while my home was sucked into a vortex of uncleanliness and chaos. I would do chores. I would assist where asked. But anything not urgent, anything that required mental planning, I would step back.

I was nervous. The day before my loadless week, I cleaned the house.

On the morning of day one, I tried in vain not to keep time. I tried not to steal glances at the clock ticking relentlessly over as my partner, baby and preschooler wandered around not getting ready for work or daycare. I tried not to think about the knock-on effects of a late departure, or the early-evening craziness that would inevitably follow. But it was hard.

After 8am, my partner mentioned that the kids needed to get dressed, so I helped. "She needs new socks!" "Where are the water bottles?" "Have they had their vitamins?" The demands and questions kept coming.

As they stumbled out the door, I desperately tried to rebalance our mental loads. "What's the temperature today?" I called. He huffed, pulled out his phone, and grumbled: "18."

The week went on in much the same vein. We made no weekend plans, but did leave the house. We ran low on vegetables, but did not starve. The kids fitted into their clothes for another week and the house remained upright. The basic daily necessities were met and I got to sit down more. But I knew it could not continue like this.

It wasn't that there were six empty toilet rolls garlanding the base of the cistern nor that the clean sheets stayed crisply folded in the laundry basket for a week. It wasn't that the girls were sent to daycare in mismatching socks or that we had toast for dinner one night and pizza delivery the next.

It was that it wasn't noticed. And I was angry. Just one week was not enough to stop the mental running around, and trying to get my partner to do it, without asking him directly, was frustrating. Every task I was trying to forget would need doing eventually, and I began to despair that these would fall to me, all of them. Forever.

I realised that it wasn't malice or misogyny that stopped my partner from stepping up. It was the sheer invisibility of it all. If ceasing to do the invisible work did not make it visible, then I would need another way to push that work into the open.

My beloved and I made a list of what we do. From backing up the computer to checking whether the bathroom basin needed a quick wipe down, we allocated and scheduled tasks in granular, petty detail.

It felt like something one would be driven to in a terrible sharehouse, but so few heterosexual couples sit down and agree on these mundane roles that we revert to the outdated ones we have been conditioned to accept. While the chore list may be petty, the effect of taking it on in silence is not.

Our Google Calendar prompts have begun. And that, dear reader, will be another experiment entirely.

This article appears in Sunday Life magazine within the Sun-Herald and the Sunday Age on sale July 22.