One thing you learn when doing research in the Amazon is that the jungle comes to life at night.

On a night trail my team and I came across a two-striped forest-pitviper.

In capturing this rare and venomous snake to take measurements, I never felt scared or in danger. I was just so thrilled to see such a cool animal and get the opportunity to take some amazing photos of it.

I studied biology at university, and the natural world has always been a fascination of mine, with missed school meaning I spent a huge amount of time at home watching nature documentaries.

I first visited the Amazon on a school trip to Ecuador at age 15, staying in an eco-tourist lodge, and have since wanted to return for a longer and more immersive trip — but the haemophilia I’d been battling for most of my life didn’t make it easy.

Haemophilia means the blood doesn’t clot as it should because some blood-clotting proteins are missing: haemophiliacs can bleed for an extremely long time after even a small cut or injury.

The bleeding can happen spontaneously and for no obvious reason; and the most dangerous bleeds are usually the internal ones.

While I didn’t suffer any bleeds on that earlier trip, on some previous holidays with friends, I had, meaning I’d have to stay in to rest for several days until I could bear weight on the injured area.

My diagnosis of haemophilia B came when I was one. My mum raised me as a single mother and did an amazing job at ensuring I understood my condition and how to communicate any pain from as early as possible.

I don’t recall any of the early trauma, however I was hyper aware of my condition throughout school. On occasions I would be taken home early for treatment or rushed to hospital after a bleed.

Growing up with haemophilia stopped me from doing certain things. I wasn’t allowed to take part in contact sports at school, which can be quite isolating when all your friends are playing for the rugby and football teams. 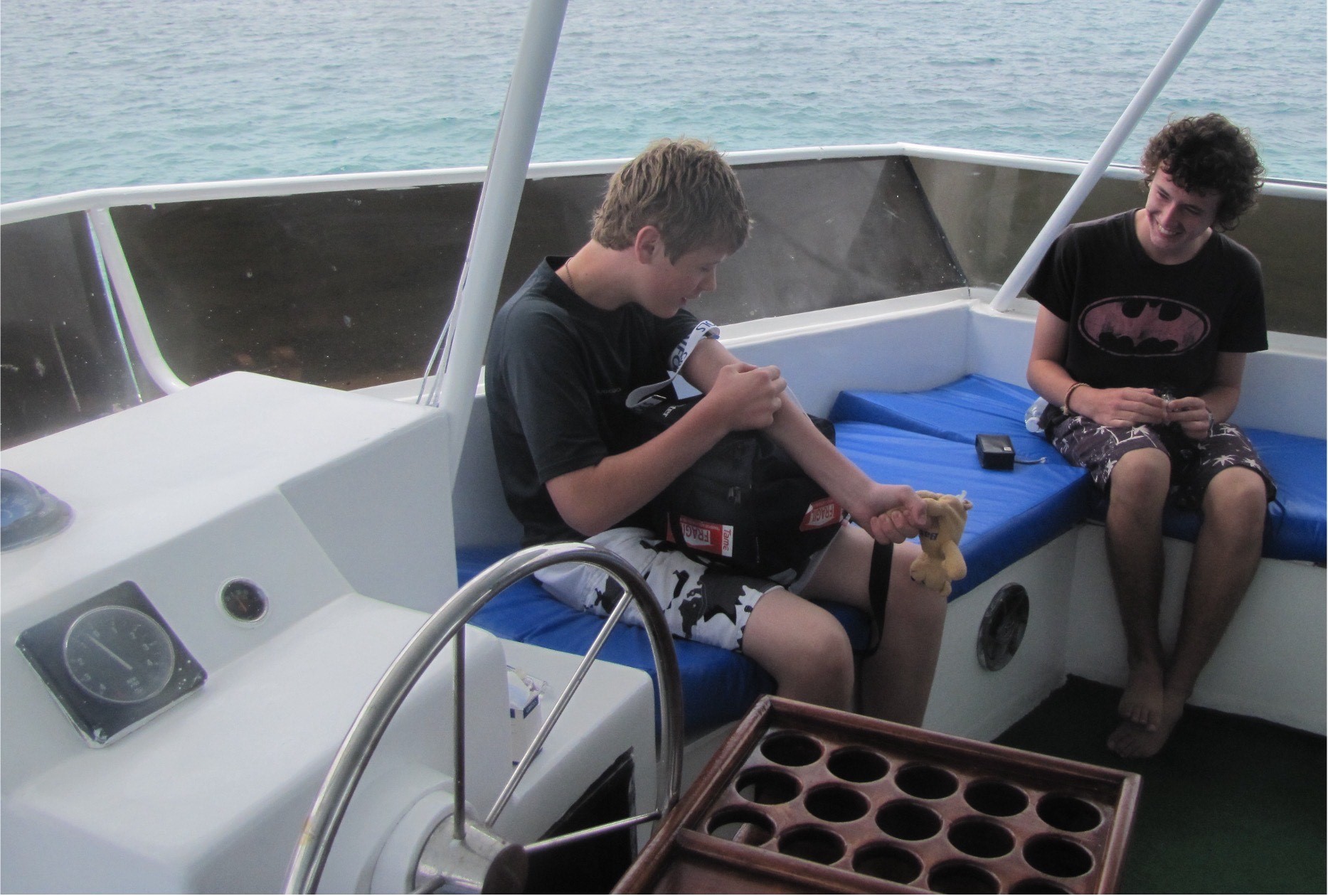 I experienced a fair amount of internal joint and muscle bleeds growing up. These are extremely painful and debilitating — repeated, traumatic bleeding into my left ankle has left me with irreversible damage to the joint, which still affects me today.

The most painful bleeds I have experienced are into the iliopsoas muscle, a large muscle in the inner hip, which was excruciatingly painful and debilitating.

I didn’t have a bad quality of life living with haemophilia, but there was no ignoring the fact it impacted my life in a fairly significant way.

I’d have bi-yearly check-ups with a doctor at my haemophilia centre. We would discuss my reported bleeds, look at how well my treatment was working and take blood tests. I’d also have to inject myself with medication intravenously three times a week.

This was not a pleasant experience, firstly for my mum who treated me as a child. Then, around age seven, I started to learn to inject myself. Hitting a vein isn’t easy when you’re so young but it was a necessary step towards becoming independent.

Growing up, I’d hear repeatedly, over many years, that gene therapy — an area of medicine that corrects a medical issue stemming from genes, and which offer a cure for haemophiliacs through introducing consistent, steady clotting — was always ‘just five years away’.

So, I resigned myself to the fact that I probably wouldn’t see it realised until I was an old man.

Then, during a regular check-up, my doctor told me about a trial that was currently enrolling for gene therapy. Having followed treatment advances and scientific news in haemophilia for a few years, I couldn’t wait to hear more about it.

I had plenty of questions for my doctor, but I also sought out answers from other professionals in the haemophilia community, like nurses and other doctors and leading patient advocates.

Ultimately, I gained enough confidence in the treatment for me to feel comfortable in progressing with the trial.

If nobody puts themselves forward for these trials, you’d never know the true potential of the treatment. So I decided to volunteer.

My reasoning was that as I’d been fairly fortunate in my life with haemophilia — I had access to safe, effective treatment  – I had a chance to give something back to the  community.

In all kinds of fields, gene therapy has huge potential. But we need the data… and I was happy to contribute to that.

Although I often had to remind myself why I was doing it, I don’t regret a thing and am so grateful for being able to take part in the trial

My gene therapy started in February 2020 when I received the one-dose of gene therapy via intravenous infusion. As part of the trial protocol, I started on high dose immunosuppression at the beginning of March. Then Covid struck.

I had a weakened immune system and had to shield in temporary accommodation alone, close to my hospital for nearly six months.

It was a really worrying and uncertain time for me — especially because, despite having haemophilia, I would not have otherwise had to shield during the pandemic. It was only due to being part of the trial and on immunosuppression that this was the case.

The only time I left the apartment was to attend the hospital multiple times a week for blood tests, to hand in my biological samples and for general observations. I didn’t see anyone else on the trial, only my doctor and nurse.

I won’t sugarcoat how difficult the first year of the trial was for me. I experienced very strong side effects from the immunosuppression. It was the most unwell I have felt in my life.

Every bodily function felt out of kilter; weight gain, trouble sleeping, acne, nausea, migraines, erratic bowel movements, mood swings, tremors – and on top of all of this, I had to deal with the mental health impact of isolating.

But although I often had to remind myself why I was doing it, I don’t regret a thing and am so grateful for being able to take part in the trial.

After nine months I was allowed to leave the shielding accommodation and thankfully, around the year mark, things started to get easier. Hospital visits became less frequent and I stopped immunosuppression.

I could also start experiencing the benefits that gene therapy offered.

Simply being able to go to the gym or go for a run without wondering if my clotting factor levels were high enough to protect me from bleeding, felt liberating.

Before the therapy, I would require regular injections of clotting factor to keep my clotting levels high enough in order to prevent bleeding, but I could still experience a breakthrough bleed.

But since the therapy, my factor levels are in the mild haemophilia range, which is high enough to prevent most bleeding without the need for regular injections.

This year, I realised I needed a break after the intensity of trial and the past two years. I wanted to get out there and truly test the efficacy of the gene therapy.

Having saved some money during the pandemic thanks to shielding in accommodation provided by the clinical trial, I found an opportunity to go abroad; and I jumped at the chance.

I went away for around two months, spending seven weeks living at a research station in the Peruvian Amazon, as part of an internship with a conservation organisation, Fauna Forever — followed by 10 days travelling in Southeast Peru and hiking the Inca trail.

Shortly after I attended the World Federation of Haemophilia 2022 Conference in Montreal, spending several weeks road-tripping across Canada and hiking around the national parks.

Due to the practical limitations of storing and transporting enough medication, I would never usually go away for more than two weeks.

A huge amount of planning was required to ensure I always had access to medication and local haemophilia centres.

When I visited Peru and Canada, I took four ’emergency’ doses of factor with me just in case.

I didn’t use any. I didn’t have a single bleed, which was a huge relief.

Taking a trip like this is something that would have been made so much more difficult if I was still reliant on regular clotting factor replacement. I’d have to have taken a lot of treatments with me, worried about keeping them cool enough, and injecting myself regularly.

Having experienced a life without severe haemophilia, it would be difficult to go back to the way things were.

I definitely hope to travel more, especially more spontaneously, as I can now enjoy day to day life without the burden of my condition. Post gene therapy I realise just how much of my time and energy managing my symptoms required.

I’m just focusing on the here and now, and enjoying what I have.

In this exciting new series from Metro.co.uk, What It Feels Like… not only shares one person’s moving story, but also the details and emotions entwined within it, to allow readers a true insight into their life changing experience.