When novelist Susan Orlean tweeted that she needed help with a familiar family struggle a couple of weeks ago, an army of people immediately started peppering her with advice.

“Retreat! Retreat!” wrote one person. “Find a book and hide your face in it until it is safe to come out.” 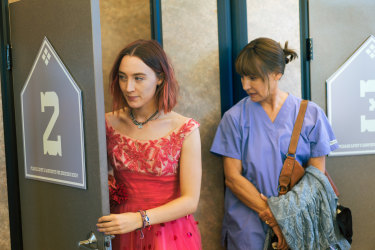 Saorise Ronan, left, won an oscar nomination for playing a caustic and judgmental 17-year-old in the film Lady Bird. In real life, a teenager’s “emotional turbulence” brings its own gains, according to one neuropsychiatrist.Credit:AP

Orlean was, of course, seeking answers to a problem that’s been around since Jesus was, presumably, rolling his eyes at Mary: parenting a teenager. Or, as The Orchid Thief author put it in a stream of consciousness tweet that suggested a person lying limp on the carpet while staring at the ceiling: “I’m around a teenager who is in a bad mood help.” (Her son, Austin, is 16.)

Now, teens have even more cause to be out of sorts, with a pandemic that has robbed them of their music festivals, opportunities to date, and, if they’re in Melbourne, the ability to leave their homes after the 9pm curfew.

Still, I couldn’t help but chuckle nervously when I saw Orlean’s tweet. It is the default expression of many of us parents of teens who’ve just about developed facial tics as a result of restraining our rage every time our child throws us a henchman’s glare after we have dared suggest they might want to shower this week.

“Apparently I need to chill,” says one woman I know, a mother of twin teens.

One tip Orlean received does, I can report, soothe the nerves. (To watch a video by satirical magazine The Onion in which a pair of fictional parents discuss their difficult decision to euthanise their “brain-dead teen, only capable of rolling eyes and texting”.)

But experts say we’d be able to enjoy our teenagers more if we looked at them in a different light.

For one thing, teenagers often give their parents insights into how they can become better people, says University of Sydney psychology professor Caroline Hunt, who has more than 30 years of experience as a clinical psychologist.

“You think, ‘Now let me think about this, is this just the teenager’s impulsive emotionality coming at me because I’ve told them they’re not allowed to go out tonight, or is it because there’s something I need to reflect on myself, and how I’m dealing with this?’ says Hunt, who recalls her own daughter, during her teen years, lobbing criticism at her.

“I used to get, ‘You love your work more than you love me’, quite often,” says Hunt. And while she was sure that that wasn’t true and trained herself not to take it personally, other accusations made her realise that she needed to change.

“I used to always jump in and solve the problem, whereas in fact all that was wanted was a bit of validation and a bit of recognition. I had to stand back and go ‘Oh, hmm, yes I do do that. I’ve got to stop doing that.’ I thought I was being really helpful, and I was being totally unhelpful,” says Hunt.

Teens also, she says, often have an unusually high level of “authenticity, genuineness, and empathy for others”. She recalls a group of teens she once counselled who’d been bullied and suffered from mental health issues as “the funniest, warmest, most supportive [people] to each other, despite the fact that they were all troubled”. This contrasts greatly to experiences she’s had working with groups of adults with anxiety disorders who were “sometimes not very particularly supportive of each other”.

This isn’t to diminish just how much teenagers can suck the joy out of a room.

Even Gabrielle Williams – an author who’s just written a novel that sings the praises of how open-minded teenagers often are – knows this to be true.

“That level of selfishness,” she says, referring to the time she discovered that her teenage son, Harry, lied about having to go on a camping trip so he didn’t have to attend his grandfather’s 70th birthday party. “I just said [to him], ‘I just need you to leave the house, don’t come back for a day or something, just go. Because I really don’t want to say the things that I know I will say today.’”

Still, one of the inspirations behind Williams’ novel It’s Not You, It’s Me – which launched on Tuesday and is about a 40-year-old woman from Melbourne who wakes up in the body of a 16-year-old girl – is her passionate belief that teenagers are chronically undervalued, in the media, and it’s a narrative that needs to be upended.

“My theory is that teenagers are on the hero’s journey,” says Williams, referring to the classic narrative archetype that lies at the centre of iconic tales like The Odyssey and Rocky and feature a person who leaves home, goes on an adventure, encounters difficult challenges and returns victorious, and transformed. “They’re in primary school, pre-pubescent, they may or may not be wanting to become teenagers, might be excited, reluctant, they’re pushed over into that new environment with all the new tangled feelings and thoughts and self-consciousness, and bodies and skin. They really are at the coalface. And it makes me feel that they don’t need the ‘disappointed face’” – the scowl most of us parents of teens throw at our kids at some point or another – “they actually need, ‘You’re a friggin’ legend face’ the whole time.

“They’re going to mess up, and we [parents] should go, ‘You messed up, but I’m going to step right back up and trust you all over again’. When you see them take that on, the shoulders go back, they don’t hunch, they really respond.” (And, yes, for those parents reading, her kids have come good: Harry is a policeman, her daughter works in advertising, and her youngest son is a journalism student.)

And when teens do mess up?

“Adults can appraise risk and the appraisal of risk actually resides in the frontal lobes, [which] won’t mature until you’re 18 or even older,” says Sachdev, a professor of neuropsychiatry at The University of NSW, of the part of the brain that is also responsible for our impulse control and decision-making. “That’s why we don’t let younger people drink, because they can’t assess risk as well.”

And while not all teenage misbehaviour can be explained by immature neural mechanisms – when asked if sometimes a person behaves badly because they’re just a jerk, he says, “That’s right, absolutely” – the “turbulent” emotional period of teenage-hood is not without other gains.

The “emotional problems and turbulence in behaviour” that parents of teens in Western cultures often struggle with are often much less common in cultures in which multiple generations live in one home and frequently interact, says Sachdev.

Being watched over by parents and grandparents in those cultures, he says, “restrains” certain types of more erratic and impulsive behaviour and influences brain development.

But with that, he says, comes “some loss”.

And, as Williams points out, once the teen years have been survived, this creativity and independence can lead to a sense of family bonding.

“We always laugh as we’re having a vodka,” says Williams, referring to an inside family joke that stems from the time her daughter, at 16, threw a party at home without her parents’ knowledge. While she had cleaned the house afterwards so that it was immaculate, she failed to anticipate what would happen after she replaced her parents’ vodka with water and returned it to the freezer. She was busted when Williams next tried to pour the vodka, and realised it was frozen. At the time, Williams was disappointed.

Now, though, she laughs. “I think that’s what life is about, all those memories. That’s one of our memories as a family: remember this?”

It’s Not You, It’s Me by Gabrielle Williams (Allen & Unwin), is out now.