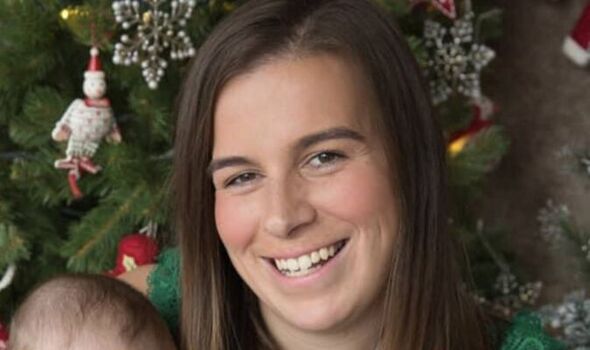 Hannah Brown had been prevented from having loved ones with her due to Covid restrictions, and sent the messages as she lay alone in intensive care. Just hours later her family took a phone call from the hospital to tell them Hannah had died. She was 26 and had been a mother for just eight months.

The family are raising awareness of the cruel disease to try to prevent another family going through the loss.

Sepsis, also known as blood poisoning or septicaemia, is a potentially life-threatening infection.

Symptoms include fever, a low temperature, a fast or racing heartbeat, sweaty or blotchy skin, trouble waking up, confusion and pain.

Dorne Richardson, mother of Hannah’s fiance Ben, said: “We kept getting messages saying she was scared she was dying and didn’t think she would be coming home.

“We’re devastated to lose Hannah. She has left behind an eight-month-old daughter. Sepsis is such a cruel disease and we want to raise as much awareness as we can.”

Hannah and Ben lived in North Yorkshire on a farm with Ben’s parents. Hannah gave birth to Millie in August 2020. Dorne said: “Hannah was a natural mum. She and Ben were great parents.”

In March last year Hannah had felt unwell for a few days, suffering with flu-like symptoms. Dorne said: “She met a friend in the village who worked at the surgery, who told her she looked dreadful and should go to hospital.”

The hospital confirmed it was sepsis, gave her intravenous drugs and transferred her to intensive care at Cumberland Infirmary. It was there that Hannah sent the heartbreaking texts.

Ben was allowed to see her in the early hours of the morning and then, two hours later, she died.

Dorne said: “We never found out why she got sepsis. We want people to be aware of the warning signs. It can’t bring Hannah back but we may stop it happening to someone else.”