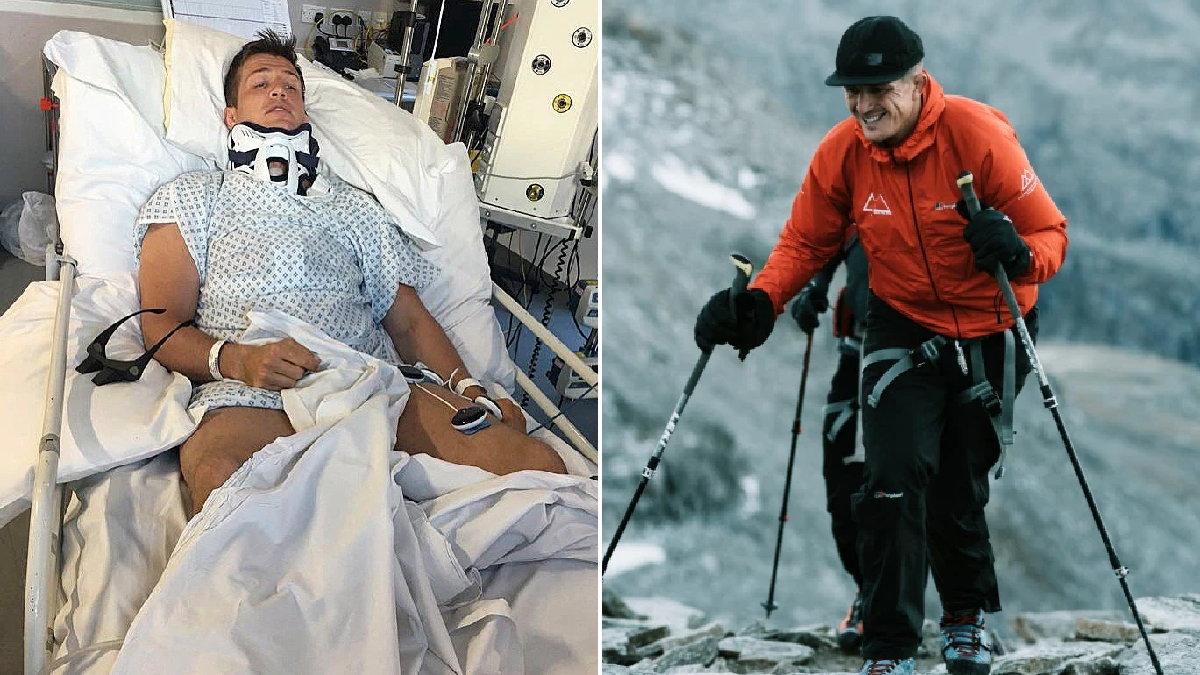 In 2017, professional rugby player Ed Jackson mistakenly dived into the shallow end of a swimming pool, breaking his neck.

But next month Ed plans to climb Mont Blanc, raising money for his own spinal injury charity.

Now aged 32, he documents his remarkable recovery in his new book, Lucky. He finds much to feel lucky about – firstly for not drowning in the pool when he was suddenly unable to move.

Then for the presence of his retired GP father, who got in the pool and held Ed up – preventing further movement and injury.

And then, after being resuscitated three times on the journey to hospital, for a neurosurgeon being on call when he arrived – meaning he was operated on within hours of his accident, preventing further swelling and damage to his spinal cord.

‘I weighed 18.5 stone and I hit my head with such force it dislocated my C6 and C7 vertebrae and the disc in between exploded,’ says Ed. ‘A shard of the disc cut my spinal cord, it went from 12mm wide to 6mm wide.’

After six days in intensive care he showed no signs of movement and when he’d been given a spinal injury assessment, doctors told the Bath-born sportsman he would never walk again.

‘They gave me category A1, which means there’s no scope for recovery,’ says the former Bath, Wasps and Dragons player. ‘After the surgeon told me I wasn’t going to walk again I decided to spend every waking moment trying to move something.

‘I realised it wasn’t just about me – it was also about the people who had to care for me for the rest of my life. I knew that if I looked back in six months and I hadn’t done everything that I possibly could, I couldn’t live with myself.’

Ed spent two days trying to wiggle one toe. ‘I was staring at my toes and trying to imagine what moving them felt like. I couldn’t feel my feet. Then I saw my toe twitching. I thought it was a spasm, but then I did it again and I realised I was making the toe move.

‘Wiggling my toe was one of the biggest moments in my life.’

Ed had been told he might regain movement in his arms but not below the chest.

So moving his toe was a huge breakthrough for him. However, his doctors cautioned him not to get his hopes up.

Gradually, working with a physiotherapist, Ed was able to sit up in bed and then move to a rehabilitation unit where he learned how to use a wheelchair. He was keen to make as much progress as possible but found obstacles in his way.

‘The NHS is an incredible machine that saved my life but there are big flaws in it. When I went to the spinal unit they tried to tell me there was no evidence that more than four hours of rehab a week would be beneficial.

‘I was looking online at research done in the US and Japan about how five or six hours of rehab a day makes a massive difference but they were telling me that four hours a week was all I’d need.

‘What they were really saying is that four hours a week was all they could provide.

‘Often doctors would say, “Yes, that’s what we’ve got to say,” instead of being honest and saying, “We can’t give you more because we don’t have the resources.”

‘I’ve been accused of giving people false hope but unless you try you won’t know. And what is “false hope?” That’s a load of b*ks. The word “hope” means something might or might not happen – and if you don’t have hope, then it won’t happen.

‘Recovering from a long-term injury is massively down to your motivation. If you keep someone motivated they’re much more likely to make a recovery. Telling them they won’t make a recovery will often only have one outcome.’

Ed used his ingenuity to maximise his amount of rehab, registering as a member of the public to use the unit’s pool, which was also a public leisure facility, to increase the hours of hydrotherapy he was able to do, in addition to the one session a week he was allocated by doctors.

Despite initial reluctance from some medical staff, friends and rugby colleagues helped him with additional rehab until, after 80 days, he finally left hospital. ‘A lot of the progress I made was due to people who were prepared to bend the rules, which is sad really,’ says Ed.

From wiggling one toe to using a wheelchair, his goals grew. First he wanted to be able to stand, then walk, and then within a year of his accident he had climbed Snowdon, encouraged by followers of the blog he started in hospital that documented his accident and recovery.

Ed launched his own charity, Millimetres 2 Mountains, which has raised money to fund a spinal injury unit in Kathmandu, Nepal, and he recently returned from trekking around Iceland.

‘When I think back to those first two months I still can’t believe I’m back on my feet,’ he says. But while he has recovered the use of his legs, his injury has left him with other complications.

‘I still use a device that picks my left foot up, as I have foot drop. My left hand doesn’t really work, I have 2% power in my left core, I have temperature regulation issues – I can’t sweat from the chest down. I have heart rate variability issues, bladder and bowel weakness so I have to use catheter bags when I sleep or when I go out, and it leaves my sleep very interrupted. I wake up 12 times a night.

‘People see the problems with walking but the underlying health issues affect me the most. People have said my blog has helped them through their situations. I’ve found that very powerful. And my charity doesn’t just help other people, it gives me a purpose. It’s hard to live with a spinal injury but now there’s enough good coming from it that I can deal with it on a day-to-day basis.’

Lucky, by Ed Jackson (published by HQ), is out now at Waterstones for £20.