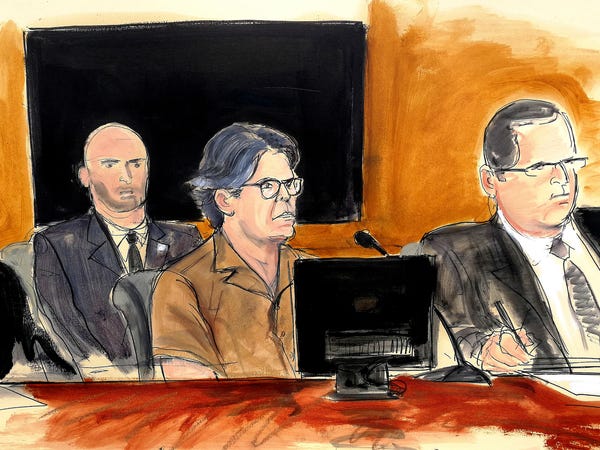 HBO's docuseries "The Vow," which follows former members of the alleged sex cult NXIVM as they try to bring down its founder and leader Keith Raniere, contains intimate footage of his relationships with former members in the 1980s.

For members who joined the cult, which was covered up as a self-improvement multi-level marketing company, the docuseries is the first time they're seeing this illuminating footage, just like viewers.

Former NXIVM member of 15 years Sarah Edmondson told Insider that viewers may have a misconception that those who left knew the extent of Raniere's sexual manipulation throughout their time with the cult. In reality, "The Vow" brought much of this behavior to the forefront for the first time.

"That's the thing that still feels a little bit misunderstood. People think that what they're showing in 'The Vow' we saw that, but we didn't and that's [Raniere's] own brilliance, keeping people quiet," Edmondson told Insider.

She said watching the never-before-seen footage in the weekly episodes, which air every Sunday, feels like "a real trip."

"The footage of him meeting Allison [Mack] for the first time, and how he like penetrated her with his eyes, it was just revolting. I mean, that whole conversation made me want to be sick," Edmonson said.

She also felt disturbed after seeing footage from the 1980s that showed Raniere lounging around while being doted on by various NXIVM women.

According to Edmondson, it wasn't clear to members like herself that Raniere had these intimate relationships with multiple women at once because he discouraged other members from romantic relationships and hid his own.

"The people who are still loyal to Keith will say, 'Sarah never worked through her issues because she was just covering up her deficiency with [her husband] Nippy or having a baby,' which is ridiculous because by the way, all the women around Keith weren't having babies because he was making them have abortions and stay so thin that they couldn't even get pregnant," Edmondson said. "I just thought all of these women were single, so they could work on issues, and it turns out they were all loyal to Keith."

For most of her time with the cult, Edmondson said she and others only saw Raniere as a professional who taught self-help courses. When she noticed him spending lots of time and being strangely intimate with his secretary, Edmondson said she wrote it off as normal, considering how closely he had to work with her.

It wasn't until she was pushed to the brink of her boundaries when she joined DOS, a secret sorority Raniere created to exploit NXIVM women, that she realized his dangerous nature.

Edmondson's friend Lauren Salzman, who she met through NXIVM, invited her to join the sorority, so she did. Then she was pressured into getting a brand that she was told represented the natural elements. But she soon realized the brand contained Raniere's initials, and for her, that was the final straw that made her leave the cult.

After leaving, Edmondson saw that Raniere created DOS to "formalize" his women-hating behavior.

Women who he manipulated in the early NXIVM days in the 1980s "woke up" and left the cult when he treated them poorly, Edmondson said.

When a fresh group of women who didn't know that information joined in the 1990s and later, "he had to create basically a blackmail pyramid scheme to keep women loyal so that they wouldn't leave and they wouldn't tell secrets," she said.

"It's been going on for a long time, is what I'm saying. It's not just DOS. It's not like he started off good and then turned bad. He's always been bad in my opinion."