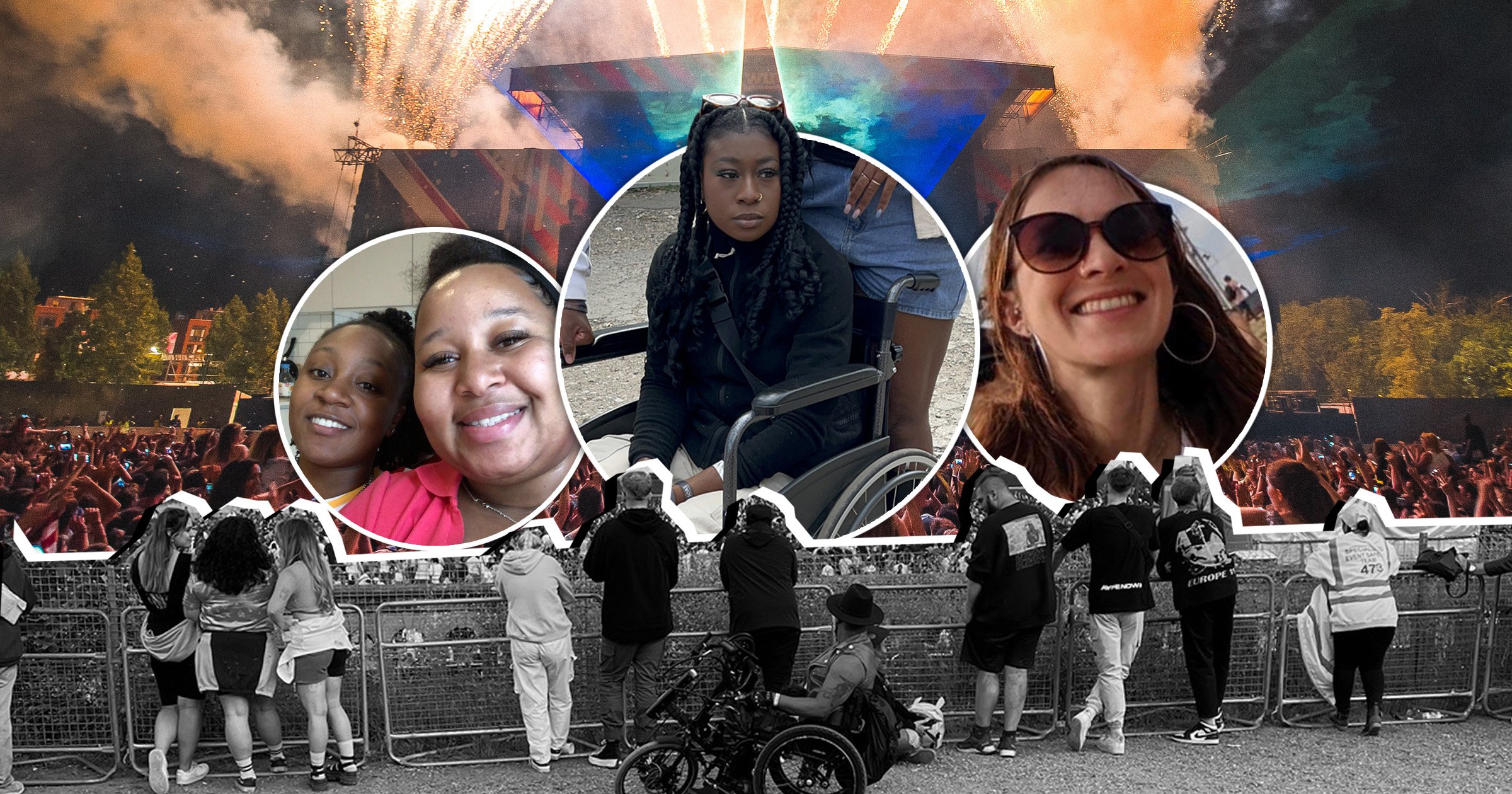 Earlier this week, Katouche Goll sparked discussions on the lack of accessibility at Wireless Festival.

The 25-year-old, from London, says her festival experience was ‘a complete nightmare from start to finish.’

Katouche has cerebral palsy and says the festival failed in several ways to provide adequate accessibility for disabled patrons.

The PR associate – who alternates between a scooter, a wheelchair and sticks to get around – said even entering the festival was a challenge, as staff were unaware of where the accessible entrance was.

When it was eventually located, it was at the top of a steep hill.

‘One of my friends actually mentioned to me that she almost fell out her wheelchair and rolled back with down the hill and her boyfriend caught her.

‘I needed three people to push me up the hill.’

Katouche adds that, once at the top of the hill, people were made to wait for more than an hour to enter the festival. And once inside, they had to go down a steep hill to get to the main stages.

She continues: ‘We get inside and we’ve got a steep hill to go down once we crossed through the gate. It’s got massive potholes in it and gravel.

‘One wrong move, and you’d be sent flying.

‘They had gravel on the ground – and the thing with gravel is that can’t get mobility aid over gravel because of the wheels.

‘My sister had to carry me on her back.’

When Katouche eventually reached the main accessible viewing platform it was incredibly far away from the stage, while another one had trees blocking the view of artists.

Katouche adds: ‘They were completely ill-prepared. There are no seats provided on the accessible viewing platform, so they had to quickly rush and get me a seat.

‘One of the staff members actually let slip that they had initially planned to build the viewing platform much closer to the stage.

‘However, because it would have cost more to raise it higher, they opted for the hill to save money.

‘So we can invest 100s of pounds into attending – and they don’t even have the decency, or respect for disabled patrons, to give us the adequate services that we’re paying for.’

‘Being disabled is the one marginalised group that you can belong to at any given moment.

‘You have no idea what life can throw at you. Look at the way society is going – with continued social instability, climate change, the pandemic – there are so many indicators that health is not a consistent aspect of our day-to-day life that we can rely upon.

‘Yet people who are live outside of my experience think, because they weren’t born with something, that they don’t have something to lose when they are discriminating.’

Dana and Renée also attended the event, and were surprised at how it differed to previous years. Renée was diagnosed with cancer a few months ago and is unable to walk for long distances. As a result, the pair feel the festival’s accessibility failed her.

Renée says: ‘I have been to Wireless before at Finsbury Park, prior to being unwell, and the viewing platform was to the side of the stage. Not far at the back. So I was surprised at where we were placed this time.

‘The viewing platform could have been more within the mix of things. We felt isolated from everyone else and it was like we were watching everyone else having fun. They could have at least covered the platform, like they did with the other platforms at the venue, so that we were not getting hit with all the cold air.’

Dana echoes Katchoue and adds that the slopes at the festival were simply not accessible.

‘On entering the venue, we were met with a downward slope,’ explains Dana. ‘I instantly knew I would be unable to wheel Renée down – so she had to walk.

‘The viewing platform was quite a distance from the entrance and the gravel made it difficult to push the wheelchair – even when Renée wasn’t in it.

‘When we wanted food we had to leave the wheelchair on the platform and walk to get it. Renée only managed this journey once and found it quite tiring.’

But it seems this is not a one-off for disabled customers.

Suzanne, from the West Midlands, loves attending festivals and gigs on a regular basis – but says the accessibility varies enormously between the events.

The 49-year-old lives with mental and physical disabilities, including clavicle nonunion and carpal tunnel.

But Suzanne says she’s even been questioned for having an invisible disability.

‘They judge you on their perception – and it’s very narrow-minded.’

‘I’ve been shooed away from the access entrance, because I don’t look disabled straight away

Suzanne adds that, at one event she went to, a member of staff didn’t even know what an accessible entrance meant when she asked them where it was.

‘It’s just lack of information, the lack of communication and the lack of respect,’ she adds.

But she says this is just the very tip of the iceberg.

Suzanne explains the information around getting access tickets and the accessibility facilities is often incredibly confusing and long to read – something made even more difficult, as one of her disabilities is dyslexia.

‘It’s reams and reams of reading that’s just not necessary. I really could live without that,’ she continues.

Suzanne adds that treatment is also very different when she’s at these festivals and events – with staff sometimes sceptical of her disabilities, and even treating her differently because of it.

‘I’m not saying I should get better treatment, but at the same time, don’t treat me lesser,’ she continues. ‘We’re not supposed to be on a golden throne and that, but why are we treated lesser? It’s like we’re an inconvenience.’

It’s clear there’s still a lot more work to be done around accessibility – not just at festivals, but in the entertainment industry as a whole. Otherwise individuals will continue to live with the physical and emotional pain following these events – something Katouche is experiencing now.

‘What I want, first of all, is a public acknowledgement of their failings and a precedent that they can commit to,’ Katouche adds. ‘And not just them, but festivals more largely – and the same can be said of nightclub venues and music gigs in general.

‘It’s very much a very inconsistent experience, you never know what sort of day or night you’re going to get based off the failures of the establishment to enact the Equality Act.’

Although, it’s worth pointing out that some festivals are already committed to this. Francesca Baker says some of the events she’s attended have great accessible measures in place.

She says: ‘My disability and needs are related to anorexia. I get exhausted easily and need to sit down. I struggle with meals so at a festival need someone there to check in and monitor my meals and planning. I have bladder problems so lengthy queues are a pain.

‘At All Points East there were no questions asked, I was allowed to bring in my own food, I got a great run through of what was available to me, a helpful map, and by the end of the night when I was knackered I could use the seating platform, despite my disability being hidden.

‘End of the Road were also fab. We were able to camp in accessible, so it wasn’t a long walk to the site, and we could park the car next to the tent so I didn’t need to carry heavy bags. There was a kettle for my hot water bottle. And as I get so cold, due to hyperthermia, that was a life-saver.

‘I also loved that there was a Facebook group for End of the Road accessibility so I could chat to people before – a really nice community.’

Inconsistency is the key takeaway from these lived experiences – and it’s clear festivals and events should be working harder to ensure diabled access is a priority at every event, and take full accountability when it fails patrons.

Metro.co.uk has reached out to Wireless Festival for comment and will update this article if we hear back.