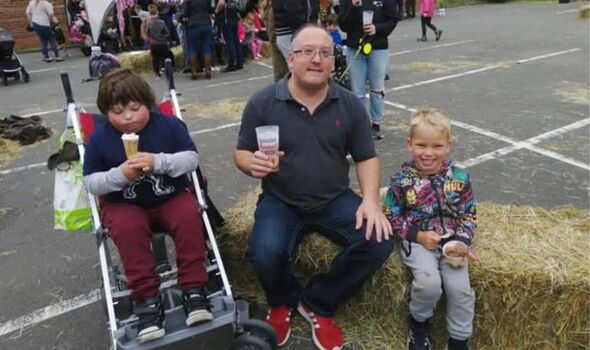 A father has shared his terror after having to leave work and drive his desperately ill son to hospital after being told his family faced a six-hour wait for an ambulance.

Stuart Tranter, 42, says he was left with no choice but to rush his 13-year-old son, Taylor-James, to Queens Medical Centre (QMC) on December 19 after his wife noticed his lips were blue and he was struggling for breath.

At 7.52am, Vikki Tranter called 999 only to be told that it would take several hours for paramedics to arrive at their home. Speaking to Derbyshire Live, Mr Tranter said: “I was petrified. I was scared but I still had to concentrate on the road, all the while I was worried he would fall asleep and pass out. I wanted to get there quickly but safely. I was so scared, it wasn’t a nice feeling.”

“He was struggling to breathe and his lips were turning blue. We were told the only ambulance available would be a six-hour wait. In the end, I left work and took him straight to hospital in my car. We arrived at QMC at 9.10am.”

Mr Tranter added that he feels let down, but at the same time understands that health services are currently under severe pressure. He said: “We also understand they’re obviously short staffed. We were still shocked at the six hours waiting time because he was struggling to breathe. We didn’t want to cause any more upheaval at that time, but we wanted to concentrate on him – he’s our son.”

Mrs Tranter said: “It’s very scary knowing there’s no ambulance service when you’re at your worst. I spent about 25 minutes trying to get TJ to stay awake before Stuart could get there from work. Then it was another 20-minute drive, all of which he was hypoxic and unresponsive. I thought in such an emergency a paramedic would be treating him within 10 minutes. He got immediate treatment on arrival at QMC because he was that poorly.”

Taylor-James, who suffers from sleep apnea, remains in intensive care today (Wednesday, January 4) fighting a lung infection. Mrs Tranter says they have been told by those caring for him to “prepare for the worst and hope for the best”.

Craig Whyles, Divisional Director for Derbyshire at East Midlands Ambulance Service said: “We are deeply sorry that we were unable to get to the patient sooner and we recognise the distress that this will have caused him and his family.

“We continue to experience a sustained level of life-threatening and serious emergency calls and have to prioritise the sickest and most severely injured patients first. Therefore, some callers may be advised that there could be a delay in our response, and urge patients that if they are asked by our 999-control room to make their own way to hospital, then they should do so – either via taxi or asking a friend or family member to drive them.

“We would like to speak to the patient’s family about their experience and urge them to get in touch with us at their earliest convenience.”

A spokesperson for EMAS said: “We received a call at 7.52am on Monday 19 December to a private address in Spondon, Derby. The caller reported a medical emergency. Three minutes after the initial call, the caller made the decision to cancel the ambulance, with the patient making their own way to hospital.”

The spokesperson added: “Handover delays at emergency departments continue to be the main challenge but this is not just an issue for ambulances or hospitals – each part of the health and social care system is working hard to do everything possible so we can get to patients as quickly as possible.

“In October 2022 we lost a total of 17,700 resource hours because our crews were delayed waiting to hand patients over at hospital; this is the most we have ever lost in one month.

“This is higher than the total amount of Double Crewed Ambulance (DCA) hours we have available in the Northampton division and therefore losing these hours was equivalent to closing one of our divisions for more than a month.”