I could, quite easily, blame Hermann Hesse for my mistake. Or India. Or, for that matter, His Holiness the 14th Dalai Lama of Tibet. You see those venerable people, and that threshing, multitudinous place, sowed my first seeds of confusion about what it means to care. 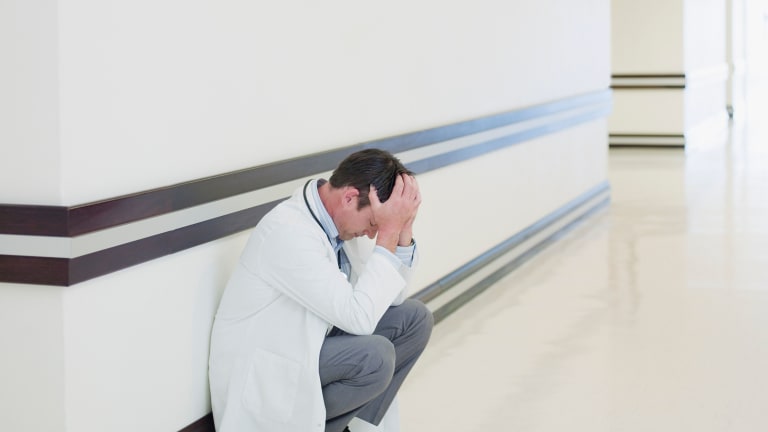 “My professional bearing was stamped more with the mark of the military man than that of the sadhu,” says Paul Biegler.

A quarter of a century ago I journeyed to a Buddhist retreat in the Indian hilltop town of Dharamsala. Armed with a copy of Hesse's Siddhartha, I was seeking enlightenment – even the garden variety would do. In the still mountain air and to the flutter of prayer flags, I learnt that my goal, bodhicitta – literally, feeling another's pain through meditation – would require compassion.

I returned to Melbourne with a Tibetan begging bowl, posters of His Holiness, and a resolve to bring real empathy to my work as a hospital emergency doctor. It wasn't long before my will was tested in the resuscitation room. The ambulance had delivered a man in his 50s who looked much older, face tinged navy, skin fragile as paper and one leg missing below the knee. His blood pressure plunged and our team converged around him with a tense, wordless efficiency.

Amid the drama, I was mindful of my additional duty. And so I reached into the wellspring of humanity I had cultivated in India and dragged from it an avatar of myself, desperate to channel the man's pain; to feel what it was to be him. We pulled him back from the brink and I went home with the sense of a new and richer dimension to my chosen profession. But when I trudged back in for the morning shift, the news wasn't good. The man's blood tests were not normal. One, which I failed to check the evening before, had shown he had suffered a heart attack.

The sickening realisation that my compassion had reduced my concentration was undimmed by the fact he had survived the heart attack with little damage. With it crystallised two goals: never to make the same mistake again, and to avoid something I put squarely in the frame for all of it – compassion.

My logic was this. What patients need is to get better, and this is the job of science. Some might want their hand held but, given a choice between a reassuring bedside manner and a gruff, unadorned diagnosis, most, I concluded, would choose the latter. So I picked up my shaken self and swore off any more attempts at bodhicitta in the ER. It was, I decided, a dangerous distraction.

Over the years, the rightness of my choice was borne out by the things I saw. The man whose skull, crushed in a factory accident, I cradled in my hands as our resuscitation went nowhere. Feeling his family's pain would fix nothing, I reasoned, merely drain me of precious and finite emotion.

But sometimes those subterranean reserves rose to the surface anyway. There was a young mother with leukaemia, spiralling to her end in intensive care, whose family I called in the wee hours to come and say goodbye, and whose husband quietly prepared their little boy and girl to enter her dim cubicle, lit only with the soft rainbow of monitors, by saying, "Mummy's got a tube in her mouth." My tears welled up and I escaped to a side room, where grief could flow silently without betraying itself to the family.

Such lapses were rare. Over two decades in medicine my professional bearing was stamped more with the mark of the military man, upright and resolute at the platoon's front, than that of the sadhu, brow-lined with the effort of a life's contemplation.

In my last years as a doctor – when patients had become a chore and the clock my enemy, its hands taunting me with just how slowly they could sweep through an hour – I visited a quiet and humble man from a counselling service. He was deeply skilled in three things. He listened when I spoke of stressful events in the hospital that troubled me. Then he asked, with a patience I could never muster, "How did that feel?" Finally, and always with an uncanny sense of timing, he would nudge the box of tissues just a little bit closer.

Funnily enough, I've become something of a student of the emotions, even writing a book on the subject. I now understand that feelings light the way to their own truth and that ignorance comes at a cost; that room must be made for feelings, even in medicine. It's really a question of how much space to allow.

To read more from Good Weekend magazine, visit our page at The Sydney Morning Herald or The Age.