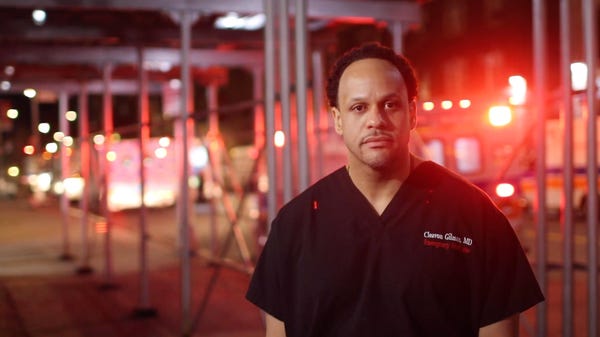 Skylar Herbert was just five years old when she died from COVID-19.

"She was a beautiful spirit, she was friendly, she was loving, she was caring, she was funny, she was just a really happy five-year-old," Herbert's mom said in April, soon after her death.

Jameela Dirrean-Emoni Barber was 17. The Maryland resident died the day after apologizing to her teacher because she felt sick and couldn't turn in her assignment.

Ben Luderer, a baseball coach in New Jersey, died at the age of 30. He's survived by his wife and his parents, who are now childless.

These are some of the hundreds of young victims of COVID-19 that Dr. Cleavon Gilman, an emergency medicine physician in Arizona, has been documenting through his project #COVIDDeaths.

Others include his colleagues, patients, and a cousin — 27-year-old gym teacher Simon Press, who was trying out for the NFL and whom Gilman called "the healthiest person you're ever going to find."

Gilman, 41, launched the series in May to combat false beliefs that the virus only affects at-risk populations. He highlights people like healthcare workers, law enforcement, educators, and people under 45.

"'Only 104 kids died,'" Gilman said people on the internet will respond. "I'm like, 'Only?' That's a lot of kids who were otherwise healthy."

The project, as well as a handful others like it including Marked by Covid and @CTZebra, also fill in important gaps in tracking; there's no formal collection of COVID-related deaths by these categories.

Putting names and faces to statistics, he hopes, makes the virus more real and wakes people up to the duty to do their parts.

"In World War II, people were drafted into serving in the military. I've served in the military," Gilman, who was deployed to Iraq as a military medic in 2004, told Insider. "All we're asking people to do is wear a mask and stay six feet apart. It's not like we're having you deployed to ICUs in the hospital."

Gilman didn't set out to become an advocate, nor did he have the time to. Serving as the chief resident of emergency medicine at New York Presbyterian Hospital during the height of the pandemic in New York, he worked eight to 12 hour days in what he said felt like a boundaryless war.

"It's not unusual to walk into a shift and there's a corpse or something like that from an hour prior that has tags on the sheets," Gilman previously told Insider. "That's just a constant reminder that I'm in a war zone."

Each shift, he'd call a handful of families to break heart-wrenching news. Pre-coronavirus, he made such calls one or twice a month.

Gilman is also a musician who raps about physician wellness, health policy, and evidence-based medicine, a fiance to his partner of 16 years, and an uncle to 10- and 12-year-old girls whom he raises like daughters.

And yet despite all the hats he wears, Gilman felt compelled to document his experience on the front lines through social media under the hashtag #CleavonMDJournal. He also began talking to the press, something few physicians do in large part for fear of repercussion from their institutions.

"I really took a chance on this," he said, though it helped that he had no complaints about his hospital's handling of the virus.

"I've been in war before. I know that these are life-altering moments in our history, and this was bigger than me," Gilman said. "I had to say something, I had to speak about what I was seeing on the front lines."

"If I didn't say anything," he added, "I couldn't live with myself, knowing … this beast was here and it was going to sweep across the US."

Now that he's through residency and out of the hot spot, he's shifted his focus from #CleavonMDJournal to #COVIDDeaths.

Gilman, whose father is Black and mother is white, was raised by his mom in Long Branch, New Jersey. After high school, he told Insider, he couldn't land a job because of his speech impediment. Plus, he said, he didn't know how to properly dress, or prepare, for an interview.

"I've had to overcome a lot of adversity, but as my mom says, I would bring home animals who were hurt," like stray cats and birds with broken wings, Gilman recalled. "So I guess I've always had a good heart."

That led him to medicine by way of the US Navy, which he joined at age 19 as a hospital corpsman, eventually deployed to Iraq.

"I kinda aged by 10 years, seeing the bloodshed and carnage and poverty that you see in war," said Gilman, who experienced post-traumatic stress disorder when he returned.

He's worried that the current war against the coronavirus will lead to similar consequences for countless Americans.

"There are going to be millions of people who have PTSD from COVID to healthcare workers and all the deaths that they've seen, the families who have lost children, who have lost brothers," he said. "I really hope that we can invest in our psychiatric departments. "

But military service gave him an important perspective, too.

"I had a really great appreciation for all the opportunity here in the US to have an education because in other places, if you're born poor, you don't have any kind of route to go to college or to school."

Back in the US, he was able to attend a North Carolina community college, transfer to UC Berkeley, and finish medical school at UC San Francisco before his residency in New York.

"I'm taking advantage of every opportunity I've had because I didn't have any opportunity growing up," Gilman said. "That's not lost on me at all."

Still, his work takes a toll.

"Posting about dead people every day — I'm just like, 'Is it going to be me? Did that person know they were going to die when they woke up that morning?'" Gilman said. "It weighs very heavy on the heart."

"I do this on my own time," he added, "because I want to prevent unnecessary deaths in America."