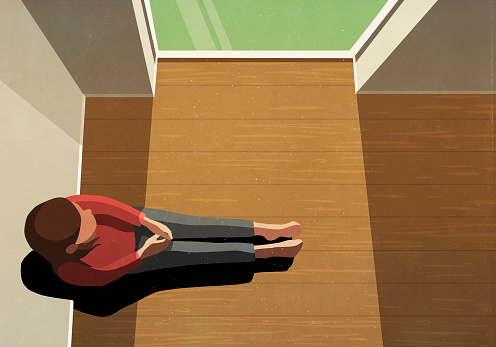 During the summer of 2020 I found myself falling into this category.

I had been experiencing some trauma-related stress following a situation where I had been verbally abused.

This left me with recurring nightmares and the tendency to startle easily – I was functioning on adrenaline, losing large clumps of hair each time I showered. I knew that this wasn’t normal for me and so sought out mental health help for the first time in my life.

Referring myself to my local mental health service was swift and simple but this led me only as far as the waiting list.

My relief upon reaching the top of the waiting list after languishing there for 11 months was immense. I had sustained myself for as long as possible with mindful colouring, yoga and knitting, but I needed the support of a professional to begin moving forward with my life again. My nightmares hadn’t subsided and I was reliving the same moments of fear, over and over again. All I wanted was for these nightmares to stop.

I introduced myself as an autistic woman at the very beginning of my first therapy session. I trusted that the professionals involved would understand what that meant, and tailor their delivery to provide the most appropriate service for me.

Lots of assurances were given to me that my allocated therapist would be able to support my particular needs as an autistic person. In my relief at finally beginning treatment, I failed to notice that no questions were asked about my access requirements.

As it turns out, living under Covid-19 restrictions offered me autism-friendly options. I wasn’t required to brave an awkward face-to-face appointment, with me struggling to sustain eye contact or squirming under the physical proximity of a relative stranger.

Instead, I was offered telephone appointments, which suited me perfectly. I felt positive that my cognitive behavioural therapy (CBT) would work out well.

Unfortunately, this optimism was short lived. It quickly became clear that my therapist had very little understanding of autism.

In our first session together he wanted to unpick my childhood, focusing particularly on my school experiences – had I been bullied? Did this make me vulnerable? Was it this vulnerability that created a predisposition to finding myself in abusive relationships?

Ignoring the latent victim-blaming within this question I began to explain that my vulnerability stemmed from my autistic mind implicitly trusting others, assuming honesty, and by default not being able to accurately predict the intentions of others.

I lost a sense of myself during that first session; the world suddenly became a less solid place for me

‘No,’ I was told – ‘that is not an autistic experience, that is a commonplace occurrence.’

My autistic experience was immediately devalued. My therapist followed this exchange by reflecting to me that I focused a lot on ‘my autism’ and posited that this was perhaps detracting from my ability to focus upon the core issues.

I felt numb following this session. I felt confused. Had I been misinterpreting my own life from the very beginning? I began questioning my own past – did it really happen in the way I thought it had?

I lost a sense of myself during that first session; the world suddenly became a less solid place for me. I found myself worrying and unable to sleep before the next appointment. Which in turn began to affect my ability to speak within the session.

Many autistic people find that their ability to communicate verbally reduces when their anxieties increase. For me, my words get stuck in my throat – my mind can formulate what I wish to say but those words just sometimes cannot be released. Rest and recuperation are the only remedies but the pressure to attend every appointment had already been applied.

I had only been allocated 16 sessions, and any absences on my part would be subtracted from this total. So, I attended my talking therapy over the phone the next week without fully being able to talk. This demand to communicate verbally with my therapist created an anxiety for me that had not previously existed.

Sessions rapidly deteriorated for me from there. I couldn’t understand the metaphors presented to me as explanations of my mental health condition. (How is PTSD like a linen cupboard? I’m still trying to work that one out.)

Being asked to articulate how I felt was often impossible. I’m not always aware of my own emotions and this can be quite common for autistic people – a trait called alexithymia.

My relationship with my therapist broke further down after approximately four sessions when he told me that I needed to attend my appointments via Zoom due to service protocol. Panic set in at the thought of having to undertake such an intense, face-to-face interaction and so I wrote to the service manager, quoted the Equalities Act 2010, and was given a new therapist.

Beginning again was not easy. My sessions became increasingly hijacked by therapist-led discussions on how best to accommodate my specific communication needs, leaving minimal time for the important therapeutic work I required. Exhaustion ensued and I was left feeling cheated rather than supported. Attempts to express these feelings to my therapist were misconstrued as me ‘not being in the right place for therapy’, and ‘would I prefer to wait until a more appropriate time in my life’?

My experience is not uncommon: social media is awash with autistic people airing their frustrations at the inflexibility of the CBT model. The common theme expressed is that therapists just do not have the knowledge to adapt their practice to enable autistic people to fully participate.

Understandably, this creates a barrier for a whole community of people. Autistic people don’t need treatment for autism and we are still susceptible to the same mental health challenges as the rest of the population – only we are unable to gain a good quality of service because our communication needs are misunderstood.

Funding issues aside, it would be great to have a choice of available therapies – more creative based therapies that enable non-verbal communication and remove the pressure to share eye contact with a practitioner.

The Royal College of Psychiatrists has recently appointed a new Autism Champion – Connor Davidson – who has been asking the autistic community directly for their experiences of mental health services.

This is a really positive response, which I hope leads to better inclusion for autistic people like myself.

As for me, once I have sufficiently recovered from my unhelpful experience with CBT, I will continue to search for more accessible types of therapy and more autism-informed practitioners.

MORE: Autism is not a mental health issue, yet I was sectioned

MORE: ‘You’re too pretty to be autistic’: Why so many women are going undiagnosed

MORE: To those who bullied me for being autistic: You haven’t beaten me