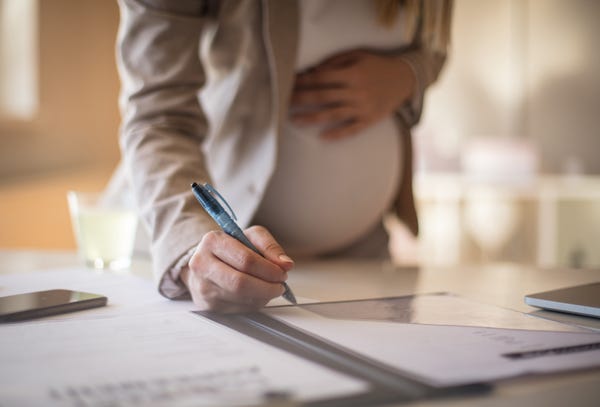 When Brianna Hill felt something unusual about 30 minutes into taking the bar exam October 5, the recent law school grad, who was 38 weeks pregnant, didn't get up to check if the sensation was her water breaking.

Instead, she stayed put for another hour to finish the section in accordance with the test's remote rules, which say lawyers must remain seated in front of a camera to ensure they aren't cheating.

"As soon as I stood up when I finished, I knew my water had broken," Hill, who'd recently graduated from the Loyola University School of Law in Chicago, told CNN.

But she still had another portion to finish that day. After cleaning up and getting the blessing of her husband, midwife, and mom — as well as shedding some tears because she was "a little panicked" — Hill returned to her seat to knock out part two, which was another 90 minutes.

Only after that did she and her husband head to the hospital, where her son was born less than five hours later. "Going into labor really put the bar exam into perspective and made my nerves go away really quickly," she told Above the Law.

But Hill still wasn't done with her testing; the remote bar exam is split into four 90-minute sections that are completed over two days. "There just wasn't another option in my mind," but to finish the test, Hill said, according to both outlets.

And that's what she did, sitting in an empty hospital room the day after the birth, and breastfeeding her newborn during breaks.

"I'm so thankful for the support system I had around me. The midwives and nurses were so invested in helping me not only become a mom but also a lawyer," Hill told CNN, adding that her husband, law school friends, and family, particularly her sister, were crucial cheerleaders, too.

They "just kept reminding me how I could do it even when I wasn't so sure myself," she said. Hill doesn't yet know if she's passed the bar, but does have a job lined up.

"I really hope I passed but I'm mostly just proud that I pushed through and finished," she told Above the Law.

Hill is the latest viral story of a woman taking "labor" literally. Dr. S. Keisin Wang posted praise for his wife, Dr. Natalie Drucker, a surgical resident who was passing orders to her colleague who'd be covering for her. "Stronger than I am!" Wang wrote on Twitter.