A long interview with US neuroscientist Dr Lisa Mosconi on the link between menopause and Alzheimer’s disease has been doing the rounds on social media this week, and it’s scaring the bejeezers out of many women over 40.

Alzheimer’s affects around twice as many women than men in the US, which, according to Dr Mosconi, used to be ascribed to the fact that women tend to live longer than men. She disagrees with this explanation, saying that while women, on average, live to be a few years older than men, these few years are not enough to explain the disproportionate rate at which women are affected by Alzheimer’s. 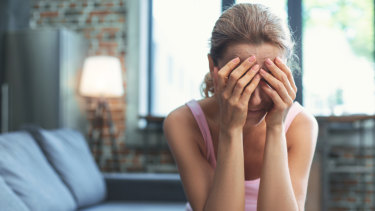 Some research has shown that treatment for menopausal symptoms is an effective protection from Alzheimer’s if it starts early in the hormonal change process and doesn’t continue long term. Credit:Shutterstock

She, and other researchers, are investigating a relatively new theory: the hormonal changes of menopause can increase the risk of Alzheimer’s.

Dr Mosconi says the reason this link hasn’t been investigated until recently is the dearth of women in research and clinical trials – the well documented “women are just small men” approach, which has been thoroughly debunked over the last twenty years.

Ralph Martins, foundation chair in ageing and Alzheimer’s disease at Edith Cowan University and a professor of neurobiology at Macquarie University, says the proposed link between Alzheimer’s and menopause, in simple terms, is attributed to diminishing oestrogen.

Oestrogen lowers the amount of beta amyloid proteins in the brain. When oestrogen levels drop during menopause, the amyloids build up and can clump together to form plaques that disrupt brain function.

While the exact cause of Alzheimer’s is not fully understood, Professor Martins says the link between changing hormones and increased risk of Alzheimer’s disease is well established.

“There’s a complex interaction going on,” he says. “Lifestyle factors like poor diet, not enough exercise, and poor sleep are all known risk factors for Alzheimer’s, but they can also have an impact on the severity of menopausal symptoms.”

Other diseases like diabetes and obesity also have an effect on hormones and increase this risk.

Professor Martins says the most important thing for women to do is to make sure they get tested early.

“We would like to see more education for GPs in this field, but the basic test GPs administer really only finds something when symptoms are already present. We need to act long before that happens.”

He recommends women visit a neuropsychologist or memory clinic before the onset of perimenopause to set a benchmark of brain function before their hormones start to change. He also says treating symptoms of menopause and perimenopause, such as insomnia, can help protect women from Alzheimer’s.

“Sleep is something we often underestimate as a protection from many forms of ill health,” he says.

The amyloid build up can start up to 20 years before the onset of Alzheimer’s symptoms, which is why it is particularly important for women to know when and how their hormones start to change (something only an experienced endocrinologist can accurately diagnose).

Kaarin Anstey, a professor of psychology and director of the UNSW Ageing Futures Institute, is not convinced that there is a direct link between menopause and Alzheimer’s.

She says, while it is true that women experience cognitive changes during menopause there are many possible explanations, both biological and social changes that could impact brain function.

Professor Anstey believes the higher absolute rates of dementia in women are largely influenced by the fact that women live longer than men, adding that trying to establish sex-linked biological causes to brain function is complicated.

“Ageing is very gendered but that is not necessarily only due to biological factors," she says. "There’s a complex interaction of lifestyle, education, stress and other factors, it’s very difficult to pick out just one as a single cause of brain deterioration."

She does, however, agree with Dr Martins on the importance of managing lifestyle factors such as diet, exercise and sleep.

As with many complex diseases, research on the link between menopause and Alzheimer’s disease is not conclusive. With women's health not well studied until recently, it makes sense for women and their doctors to investigate early and manage the known risks as much as we can.

Not smoking, getting enough sleep, having a good diet and regular exercise are the basics we already know about, and this is just one more reason to remember how important they are.