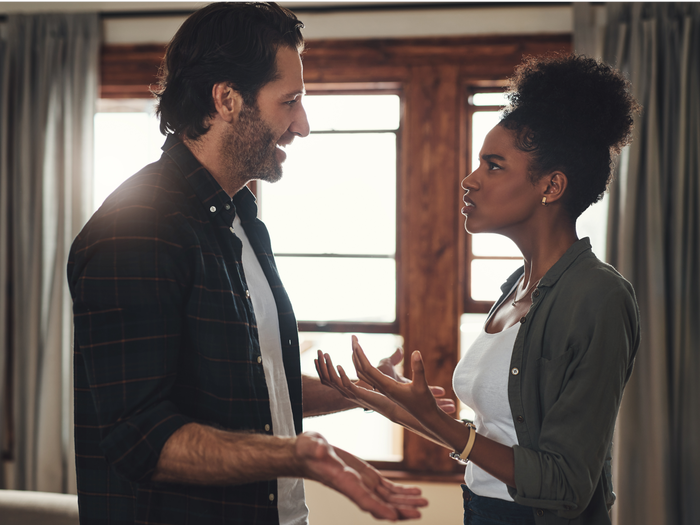 Abusive relationships are often portrayed as bouts of physical violence. But not all abuse is physical.

Emotional abuse is oftentimes the precursor to violent abusive relationships. It can also be subtle, making it difficult to gauge whether a relationship is abusive or not.

Insider spoke to therapists about how to spot the subtle telltale signs of an abusive relationship.

The relationship may start sweetly with 'love-bombing'

One of the first signs you might be in an abusive relationship is a behavior called love-bombing, when an abuser showers their partner with love, gifts, and attention to capture affection.

The beginning of an abusive relationship might start quickly and intensely to make the partner reliant on the abuser.

"Vacations, gifts, elaborate experiences, constant contact, or just too much information and too much intense interest overall," Dr. Ramani Durvasula, a licensed clinical psychologist and narcissism expert, previously told Insider. "A narcissistic relationship often starts as too much too fast — this is then followed by a cycle of devaluing, discarding, and ups and downs."

Abusive relationships are filled with gaslighting

"Gaslighting is simply trying to make someone believe what they observe is actually untrue. It could play out even in the simplest terms such as an abusive partner insisting that their partner left a dirty dish in the sink when they knew they themselves actually did it," Caraballo told Insider.

Abusers use gaslighting to make victims question their perception of reality, which stops them from seeing the abusive behavior of their partner.

"Gaslighting is rarely a one-time occurrence in abusive relationships, where controlling partners will use it to make their partner's distrust their own thoughts and feelings, which gives the controlling partner more ability in the future to exert control and use their power for their own selfish needs," Caraballo said.

Abusers control victims' relationships with the outside world

Abusers may start small, telling their partner to not see a specific friend or to unfollow their ex, but this can escalate quickly.

"It's obviously important to explore how you might engage with other people online and how that makes each other feel but a partner 'not allowing' you to use social media or have any DM conversations, for instance, is a serious warning sign," Caraballo told Insider.

Oftentimes, abusers will begin limiting the way their victim interacts with family and friends to isolate them from the outside world.

"Someone who constantly expresses negativity about a friend or family member you love and care about might also be demonstrating a tendency to control and isolate in the long term," Caraballo said.

Caraballo told Insider identity can play a significant role in abusive relationships, as abusers may use their societal power to gain power in a relationship.

"A white partner might make comments about 'appropriate' behavior to a Black partner who is more reactive publicly in an effort to control their partner's behavior," Caraballo said.

"Oftentimes abusers will use their relative power to their benefit, and will do this systematically over time."

This can result in marginalized people, like trans people, women of color, and disabled people, experiencing disproportionate rates of abuse with fewer avenues of escape.

FKA Twigs sues ex Shia LaBeouf, claiming in a lawsuit that he choked her and grabbed her 'to the point of bruising'

Child abuse centers have seen 40,000 fewer kids during the pandemic. Experts believe they're still being harmed, but it's going undetected.