When you eat at a chain restaurant, do you ever wonder which dishes on their menu are the most popular? After all, the options probably look exactly the same at all of the chain’s locations across the country. And if a specific dish is the most popular order nationwide, the restaurant must be doing something right with that meal.

Read on to discover the most popular dish at America’s favorite chain restaurants — just don’t blame us if you start feeling a little hungry!

Heading to Applebee’s? Then you may want to check out the dish that People learned is the chain’s most popular order: the Bourbon Street Chicken and Shrimp. This meal features Cajun-seasoned chicken, blackened shrimp, and a generous amount of garlic butter. And the chain serves it sizzling on a cast iron platter, with sauteéd mushrooms, onions, and red potatoes.

Next: People love this family meal.

People also found out which menu item has become Boston Market’s most popular. And the answer won’t surprise anyone who’s eaten at this fast-casual chain. The Rotisserie Chicken earned the crown as the most popular order at Boston Market, with the chain telling People that it serves more than 21 million of the garlic-and-herb marinated birds each year. That’s a lot of chickens!

Next: Lots of people love this iconic pizza.

According to People, California Pizza Kitchen says that its most popular dish is its BBQ Chicken Pizza. The publication explains, “Adding chicken on top of pizza was practically unheard of until CPK came along in 1985 with their now-iconic, must-order pie.” According to the chain’s menu, the pizza includes California Pizza Kitchen’s “legendary” barbecue sauce, smoked Gouda, red onions, and fresh cilantro.

Next: This chicken dish got so popular that the restaurant chain now uses it in multiple menu items.

If you order the Chicken Bryan when you head to Carrabba’s, you’ve found the most popular item on the Italian chain’s menu! People reports that this dish — which features grilled chicken, goat cheese, and lemon-basil butter — has become so beloved that the chain also offers it on a pizza and in a panini. That’s pretty impressive for a dish that’s neither breaded nor fried!

Next: Everyone loves this appetizer.

People learned that Americans have made the Avocado Egg Rolls the most popular dish at Cheesecake Factory. In fact, the chain told People that the deep-fried appetizer has gotten so popular that its locations across the country go through 4.2 million pounds of avocados each year. In addition to avocado, the egg rolls feature sun-dried tomato, red onion, and cilantro, all in a crispy wrapper and served with a tamarind-cashew dipping sauce.

Next: People can’t get enough of this burger. 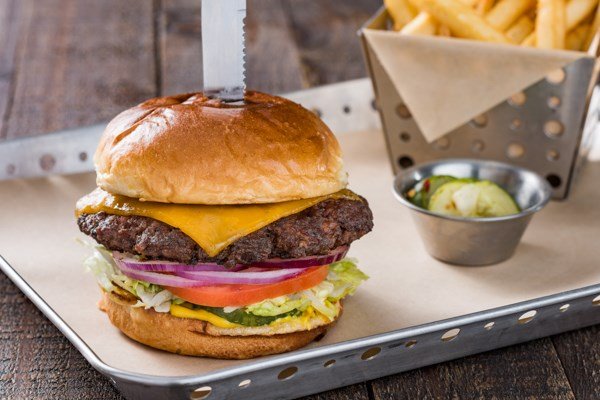 Chili’s has been around for decades, so you’d think that the most popular item today probably wouldn’t be something the chain was serving years ago. But surprisingly enough, People learned that the most popular meal at Chili’s is the Oldtimer with Cheese, a Texas-style burger that appeared on the original menu back in 1975. On the Chili’s website, the tagline for the burger reads, “You can’t top burger perfection, unless you add cheese.”

Next: People love this comfort food.

Cracker Barrel is a favorite chain restaurant for many Americans. And People learned that many of the chain’s fans order the Hashbrown Casserole when they stop in. This southern-style dish features shredded potatoes baked in a cheesy sauce — the ultimate in comfort food. And at some locations, you can even order a Loaded Hashbrown Casserole, which adds crispy bacon and a slice of melted Colby cheese on top.

Next: This is the perfect breakfast for indecisive diners.

According to People, the most popular dish at IHOP is the Breakfast Sampler. This crowd-favorite gives you everything you need if you just can’t decide on one thing. As IHOP explains, “With our sampler, two is the magic number! That’s two eggs, two hickory-smoked bacon strips, two pork sausage links, two pieces of ham, two fluffy buttermilk pancakes and our golden hash browns.”

Next: Everyone loves this hearty dinner.

People across the United States love Olive Garden — and its Chicken Fettuccine Alfredo, according to People. The publication reports that people continue to order the dish even though Olive Garden has shared the actual recipe for it. You can make the delicious meal at home. But you may find yourself on your own figuring out how to approximate the chain’s delicious breadsticks.

Next: People can’t get enough of this dish.

According to People, the Sizzling Fajitas have become the most popular dish at On the Border. The meal has gotten so popular, in fact, that the chain invented a holiday inspired by it. You can celebrate National Fajita Day on August 18 at the On the Border location near you — and of course, you’ll want to order from the fajita section of the menu to properly celebrate the holiday.

Next: Everyone loves this steak.

According to People, Outback Steakhouse’s most popular dish is its Special Sirloin, which the chain refers to as one of its leanest cuts. As Eater explains it, the Special “consists of a larger-than-FDA-recommended serving of sirloin steak seasoned with a proprietary mix of spices, which included salt, pepper, cayenne, and garlic powder, but also something else” that the chain has never revealed.

Next: People love this iconic meal.

P.F. Chang’s may not offer authentic Chinese food. But it still numbers among America’s favorite chain restaurants. People learned that the Lettuce Wraps have become the chain’s most popular order. And the publication attributes the dish’s popularity to the secret recipe for its “umami sauce.” According to the chain, the lettuce wraps are “a secret Chiang family recipe and our signature dish. Enough said.”

Next: This bread is addictive.

The Cheddar Bay Biscuits take the crown as Red Lobster’s most popular order, according to People. The publication learned that each year, the chain makes about 350 million of these biscuits, with their top-secret blend of garlic, cheddar, and parsley. There’s no better accompaniment to the other items on the Red Lobster menu than these iconic — and addictive — biscuits.

Next: People love this burger.

The menu at Red Robin can get a little overwhelming. (The chain has more than two dozen burgers and 100 different toppings for you to choose among.) But People learned that the most-ordered version is the Bacon Cheeseburger topped with a fried egg — also known as a Royal Red Robin. This beloved meal features hardwood-smoked bacon, an egg, American cheese, lettuce, tomatoes, and mayo.

Next: Everyone loves this appetizer.

An iconic appetizer, the Loaded Potato Skins have won the hearts of many patrons of TGI Fridays. People reports that the restaurant claims to have invented this now-ubiquitous appetizer. In fact, the Loaded Potato Skins debuted at TGI Fridays back in 1974. According to the chain’s menu, the potato skins feature with cheddar and bacon, plus ranch sour cream and green onions.

Read more: Millennials Are Refusing to Eat at Chain Restaurants: Here’s the 1 Surprising Reason Why