It might not feel like it, but sweater weather and all its cinnamon, nutmeg, and pumpkin-infused bites and sips are just around the corner. Personally, I’m loving all the seasonal treats that are hitting the shelves before Labor Day so we can enjoy a tasty preview of fall without saying goodbye to patio season just yet. Case in point: these Pumpkin Pie-Flavored Rice Krispie Treats for fall 2019 are now available in stores, and they’re the perfect munchies to enjoy both poolside or wrapped up in a blanked when the seasons change.

With September just a few days away, the season of pumpkin-flavored everything is almost upon us, and I for one couldn’t be happier. In addition to the much-hyped return of the PSL, Starbucks’ new Pumpkin Cream Cold Brew, and the re-release of the Pumpkin Spice Beignets at Disney World, people are falling into pumpkin fever from coast to coast. So, when I learned that a Rice Krispies version of the season’s most signature pie was already back in stores, you can say that my tastebuds were pretty pumped. According to press materials shared with Elite Daily, the Pumpkin Pie-flavored Rice Krispies Treats first made their debut in 2018, but there’s a chance that you might not have seen them because they were only offered in "select stores." Due to the popularity of the treat, they’re now back and available at retailers nationwide, meaning that you can probably head to your local grocery store to snag a case or two.

According to Instagram blogger @FamilyFoodDude on Aug. 23, the limited-edition treats are already starting to roll out at retailers, so you can head to your closest store during your lunch break to see if they’re available. For those of you who have yet to try the pumpkin-infused munchies, each of these Rice Krispies Treats "deliver the perfect pumpkin pie flavor, complete with just the right amount of icing" in each 90-calorie snack. In other words, if you’re looking for a way to combine the iconic flavors of your classic pumpkin pie with the buttery crunch of a Rice Krispies Treat, this is it. 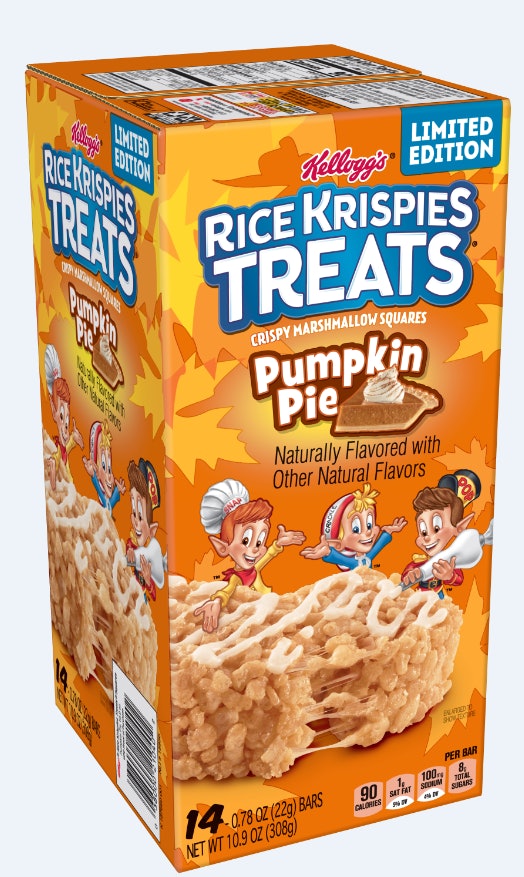 In addition to serving up plenty of fall flavor, the snacks will also include Rice Krispies Treats Writeable Wrapper, so you can write your bae a sweet note if you’re feeling the fall love. If you’re looking to gain extra brownie points, I’d suggest pairing the seasonal munchies with an on-theme drink like Starbucks’ customer-favorite Pumpkin Spice Latte or, if you’re feeling like being adventurous, the coffee giant’s brand new Pumpkin Cream Cold Brew. IMHO, there’s no such thing as too much pumpkin, so you’ll want to start getting your tastebuds ready for the changing seasons in the sweetest way possible.

While the Pumpkin Pie Rice Krispies Treats will be available at many more stores this fall compared to the limited rollout last year, I’d still keep in mind that they’ll still only be sticking around for a few months. So, if you do happen to see them at your local grocery store, there’s no shame in grabbing as many boxes as you can carry so that you’re fully stocked for the rest of the year.

NTAs 2020: Loose Women stars wear red as they cross their fingers for Best Daytime Show win over long-time rivals This Morning Stars of the…