As an adult, one of the best parts about the scariest night of the year is getting into the ~spirit~ of the spooky vibes with a drink in hand. Whether you’re looking to fuel up with some caffeinated sips or get the party started with a boozy concoction, I’ve rounded up the 5 best Halloween 2019 drink deals that promise to be all treat and no trick. From a cocktail that Edward Cullen would want to sink his fangs into to a Dunkin’ happy hour promo, here’s everything you can take advantage of leading up to the end of October.

Now that October is well underway, chances are that you’ve been taking advantage of all the scary good deals that have been on offer. In addition to chains like Applebee’s, Chili’s, and TGI Friday’s making happy hours a little spookier on the cheap with several on-theme monthly drink specials in honor of the holiday, coffee companies like Dunkin’ have also been making it a little sweeter to fuel up this month. Here are some of the best deals to take advantage of before November comes around. Of course, you have to be 21 years or older to indulge in the cocktails, but thankfully there’s more than just booze on offer this Halloween.

If you’re looking to really get into the spirit of Halloween with a Dracula-approved sip, head on over to Chili’s for the chain’s $5 Fangtastic Margarita, which features blood orange flavors and a set of fangs on top. According to press materials, the ‘Gram-worthy sip features a mix of Lunazul tequila and Cointreau that’s been blended with fresh sour and blood orange syrup, making it the perfect choice to start your Halloween festivities on the most festive note.

This year’s libations are all about the fangs, as seen by Applebee’s $1 Vampire cocktail. If you’re a fan of rum, you can head to your local Applebee’s to pay just a buck for a mix of "rum, strawberry, dragon fruit, passion fruit, and a dash of pineapple." Not only is the sip an eerie purple hue, but you’ll also be getting a set of fangs nestled on top along with a cherry. 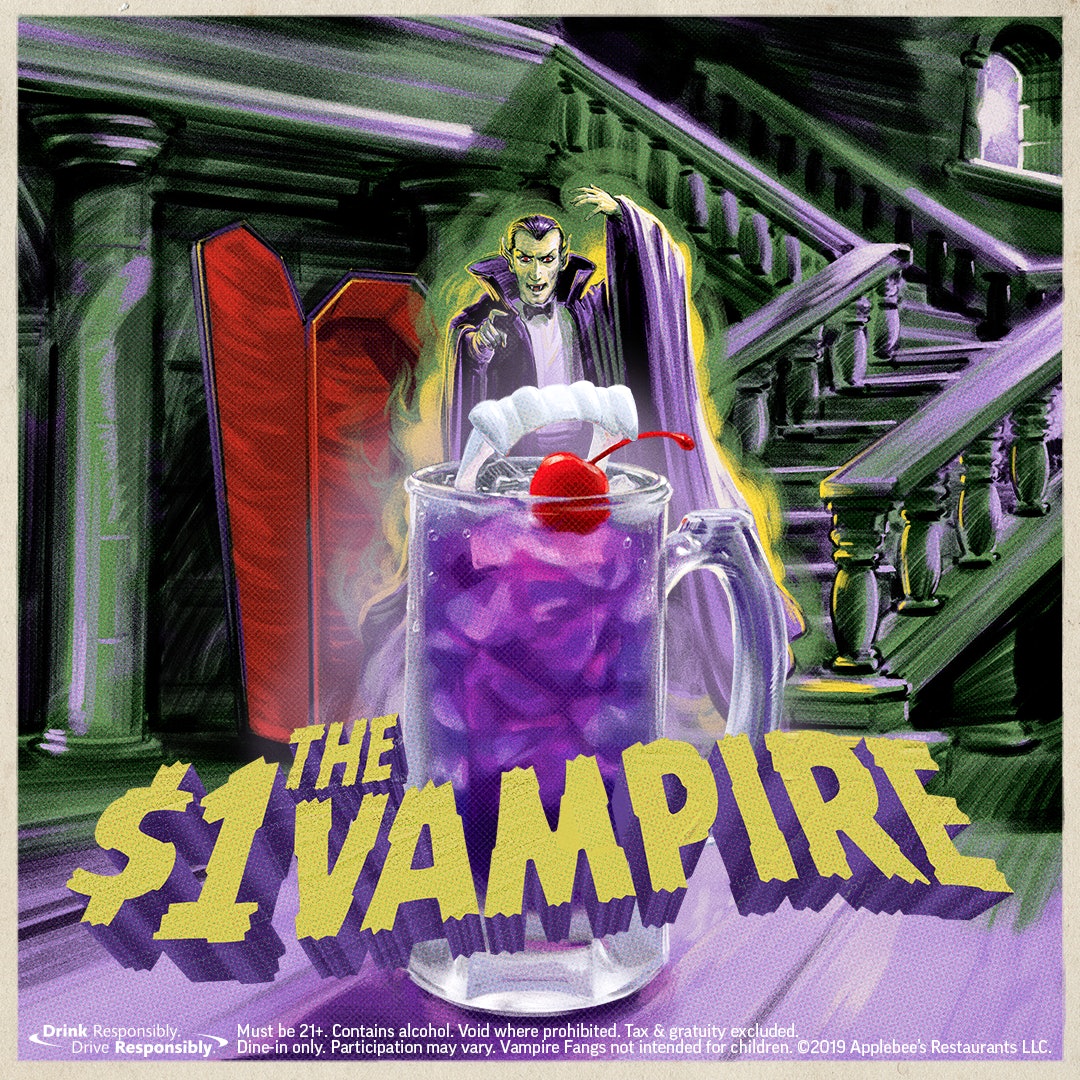 While Applebee’s Vampire is a festive option that won’t break the bank, you can save even more if you opt for a classic cocktail. During the month of October, you can score Long Island Iced Teas for just 50 cents at your local Applebee’s. If you’re looking to get lit for your Halloween night out or a scary movie marathon at home, you can’t really beat this deal.

According to the TGI Fridays website, the restaurant is offering a slew of festive hand-crafted cocktails for just $5 during the month of October. My favorite out of the bunch might just be the Pumpkin Spice Sangria, which adds a spooky factor to your favorite fall flavors with a pumpkin garnish.

If you’re looking to fuel up before your Halloween evening festivities, I’d recommend checking out the happy hour deal at Dunkin’, which goes from 2 p.m. through 6 p.m. at participating locations every day. During this time, you can score a medium-sized Latte, Cappuccino, or Americano for just $2, making it so cost-effective to get caffeinated before the night starts. The best part is that this happy hour deal is going on through Dec. 31, so you can take advantage of some seriously cheap sips through the end of the year.