Drinking iced coffee in the dead of winter just got a little less chilling. 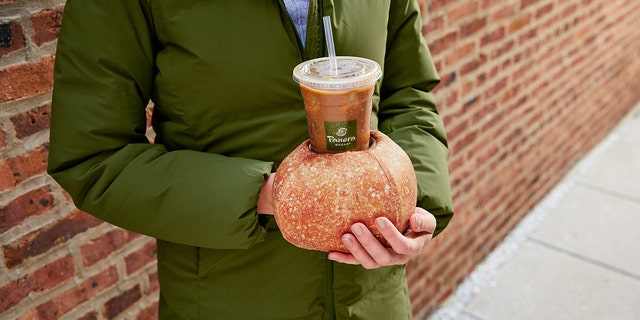 Customers can enter for a chance to win one of Panera’s new Bread Bowl Hand Warmers starting Tuesday.
(Panera)

Panera’s new “Iced & Toasty Bread Bowl Hand Warmer,” as it’s called, is actually a mitten of sorts, made to keep hands warm while sipping iced coffee. The “bread bowl” opens at the top to hold coffee cups and there’s a side pocket to keep hands warm inside.

But while the doughy morsel may look like a post-coffee snack, sadly, the Iced & Toasty Bread Bowl Hand Warmer is not edible, but rather a fabric-based mitten designed merely to look like a bread bowl. Meanwhile, anyone desiring an actual bread bowl can go ahead and order a soup from Panera. The sandwich and salad chain has also been known to repurpose its bread bowls for other items, like its Mac and Cheese.

The inspiration for the item came from a survey it conducted that found 78% of Americans still intend to drink iced coffee despite the mercury dropping.

Customers can enter for a chance to win one of Panera’s new Bread Bowl Hand Warmers at icedandtoasty.com starting Tuesday.

The gimmicky sales move is the latest way chains are promoting iced coffee on winter menus to feed customer demand.

Starbucks last month announced a new line up of cold brew drinks on menus. And Panera launched a coffee subscription in 2020 for $8.99 per month, giving users unlimited java access via its app, with the first three months free for anyone who signs up.

More food chains have also leaned into the coffee market. Burger King launched a limited $5 coffee subscription in March 2019, though it ended the program after a few months.