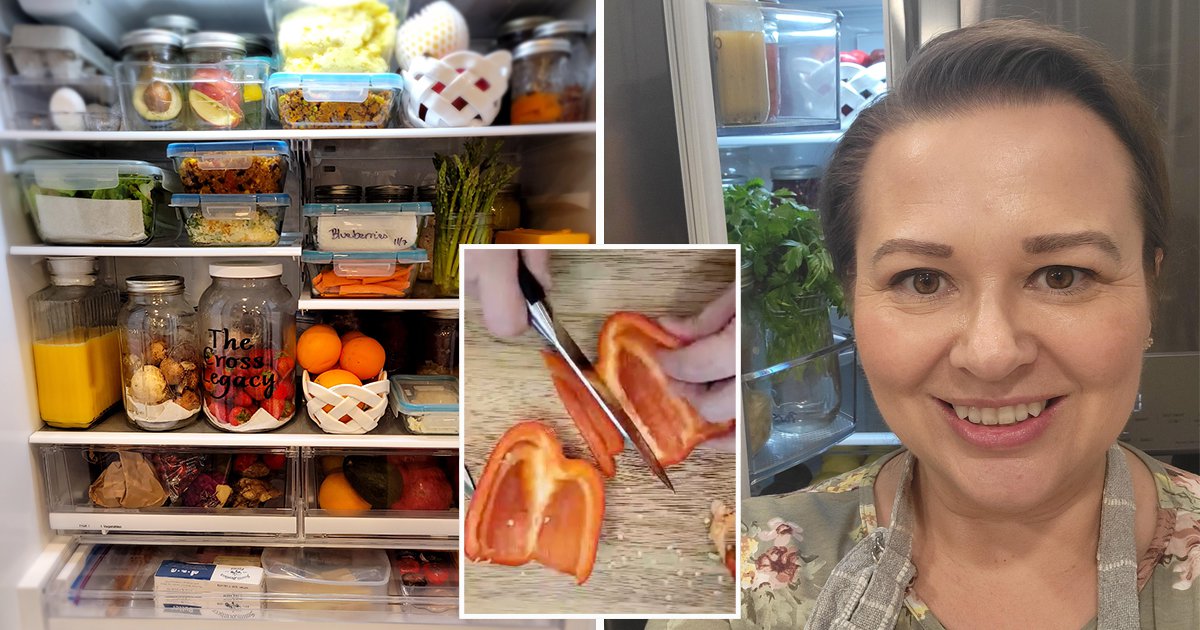 All you need is one simple ingredient to extend the shelf life of your fresh produce.

A food blogger and mum has shared tricks for keeping food fresher for longer – from having strawberries last for weeks and peppers for months.

She likes to save where she can when it comes to food shopping – often spending just £200 every three weeks for her family-of-four – and making her veg lasts longer helps her save money.

These are her favourite food preparation and storage hacks which will help reduce food waste:

Amy can make these last for up to two months after purchase.

Using peppers she purchased from a farm stand in late October, she recently created a ramen soup – and says the vegetables were every bit as crisp as the day she bought them.

The first step is filling a large bowl with 10 cups of water and a quarter of a cup of distilled white vinegar.

Amy then lets the peppers soak in the water-vinegar mixture for two minutes before taking them out and letting them dry on a towel for a couple of hours.

It’s important to make sure the peppers are completely dry before storage.

Amy does this by cutting them into strips or dicing them, and then placing the cut peppers into wide-mouth, pint-size mason jars in the fridge.

Amy also opts for storing them in a jar to help keep the fruit fresh.

She starts the process the day she buys them.

She lets the strawberries soak in a solution of 10 cups of water and a quarter cup of distilled white vinegar.

This time, the mum leaves the berries to soak for a maximum of three minutes – warning that any longer and the fruit will start the fermentation process.

She then rinses the berries off in a colander before laying them on a towel to try.

Once they are completely dry – which can take several hours – she puts some paper towel at the bottom of a glass jar and gently places the berries in.

While, if stored in the fridge, the tip will keep the fruits fresh for weeks, Amy says it is crucial to check the jar for condensation.

If there are any signs of it, take the berries out and pat them dry again before returning them to the jar.

She added: ‘Your strawberries will last longer if the jar you store them in is airtight. I do not puncture holes into the lid for this reason.’

It’s a staple in most fridges and the base for all good salads, but lettuce tends to turn quickly.

Amy can make them last for up to six weeks.

She soaks the lettuce in the same mixture of 10 cups of water and a quarter cup of distilled white vinegar for two minutes, before rinsing the leaves off to remove any loose dirt or bugs,

She then spins the leaves in a salad spinner before laying the lettuce out on a towel to dry for two hours.

Once dry, she stores the leaves in a glass container – which she says is more effective than plastic.

She places a piece of paper towel at the bottom to collect moisture, and then stores the container in the fridge.

The combination means her lettuce lasts for up to six weeks.

Amy said: ‘It is worth the extra effort to know we have fresh lettuce anytime we want a salad.’

For pomegranates, Amy’s process begins in the supermarket – by selecting the heaviest fruit.

She said: ‘The heavier ones have more juice. You want it to be firm like an apple, and brown spots are ok, as long as there are no cuts into the fruit.’

Unlike with her other produce, she doesn’t wash the pomegranates or seeds when she removes them.

She starts by cutting the crown off and makes four slices so that when she removes the crown, it has an ‘X’ shape with alternating pockets of seeds and a white membrane.

She makes the slices where the membrane is but does not cut all the way to the centre.

Once the pomegranate is effectively quartered, pull apart the pieces by grabbing two sections and pulling them in opposite directions.

The large white section of membrane should come away fairly easily, and once the pomegranate is open, Amy removes the seeds and puts them in a bowl, removing any that are not ripe.

She then stores the seeds in a glass jar, which she says keeps the fruit fresh and ready to eat for up to two weeks in the fridge – or for a year if you freeze them instead.

Following the same method of washing lettuce – soaking the leaves in the same mixture of 10 cups of water and a quarter cup of distilled white vinegar for two minutes – Amy says her spinach lasts for as long as three weeks after purchase.

Amy then takes the spinach out of the vinegar bath and spins them in a salad spinner before laying them on a towel to dry completely.

Next place a piece of paper towel at the bottom of a storage container before adding the spinach.

Amy then uses a glass container or silicone bag to store the leaves most effectively.

The spinach can be put in the fridge if any is left before your next shopping trip.

Amy added: ‘No more bags of mushy greens that go bad before you have a chance to use them.

‘When I make my triweekly trip to the store, I always look for a bag that doesn’t already have wet leaves in it.’