Amidst all the transformation is one constant: Kayla’s eating style. “My diet hasn’t really changed much over the course of my career,” she tells Women’s Health. Kayla doesn’t count calories, restrict herself, or follow a specific diet plan (she’s not into fads).

Her approach since day one: a balanced Mediterranean-style diet that includes lots of fresh fruit and vegetables, meat, fish, pasta, and plenty of olive oil, lemon juice, and oregano. “I grew up in a Greek family in which food is the most important thing in the whole world,” Kayla says. “As a rule, I don’t think about what I need to eliminate from my diet. Rather than cutting things out, I would add good things in.” (For Kayla, those good things are plenty of healthy protein and all the veggies.)

This balanced, sustainable approach has kept Kayla fueled through creating her Instagram empire, pregnancy, and beyond. Here’s exactly what the fitness queen eats in a day.

Just in case you thought Kayla was into the whole fasted cardio or intermittent fasting thing, know this: “I usually wake up hungry, so the first thing I want to do is eat, not train,” she says. “I want to make sure that I have enough fuel in my body to be able to work out.⁣⁣”

How did Kayla stay so fit through pregnancy? Check out her full-body pregnancy workout:

A disclaimer Kayla does share about her first meal of the day, though? “It’s probably going to sound disgusting.” But trust her, her morning meal of “two pieces of toast with olive oil, anchovies, tomato, and olives on them” is so good she’s been eating it daily for the last four years.

With it, Kayla sips a Greek coffee, which she clarifies is *technically* a Turkish coffee. (It’s made without a filter, meaning you get to enjoy a heavenly sludge of grounds at the bottom of your cup.)

Kayla is a creature of habit, so she sticks to this breakfast even when dining out. “I go out for breakfast every Saturday morning with my family and I order this dish every. single. time.” No judgment!

If Kayla’s feeling extra hungry, she has several g0-to snack options. “I have tuna on some crackers, some fruit and yogurt, or a Greek biscuit at my grandparents’ house,” she says.

She always listens to her bod, of course.”I’m really flexible with my snack,” Kayla explains. “If I don’t want a snack, I don’t have it.”

Come mid-day, Kayla focuses on maintaining her energy levels. “At lunch, I’ll have brown rice, tuna, and throw in some tomato, cucumber, onion with balsamic vinegar, olive oil, salt, pepper, and oregano,” she tells WH. “I always make sure I have some sort of bread or rice at lunchtime because I need that meal to stay awake and have energy throughout the day.”

To save time, Kayla opts for easy microwaveable brown rice and tuna from a can. Flavor is key to enjoying what’s on her plate, so Kayla adds herbs and spices to ~every single~ meal. 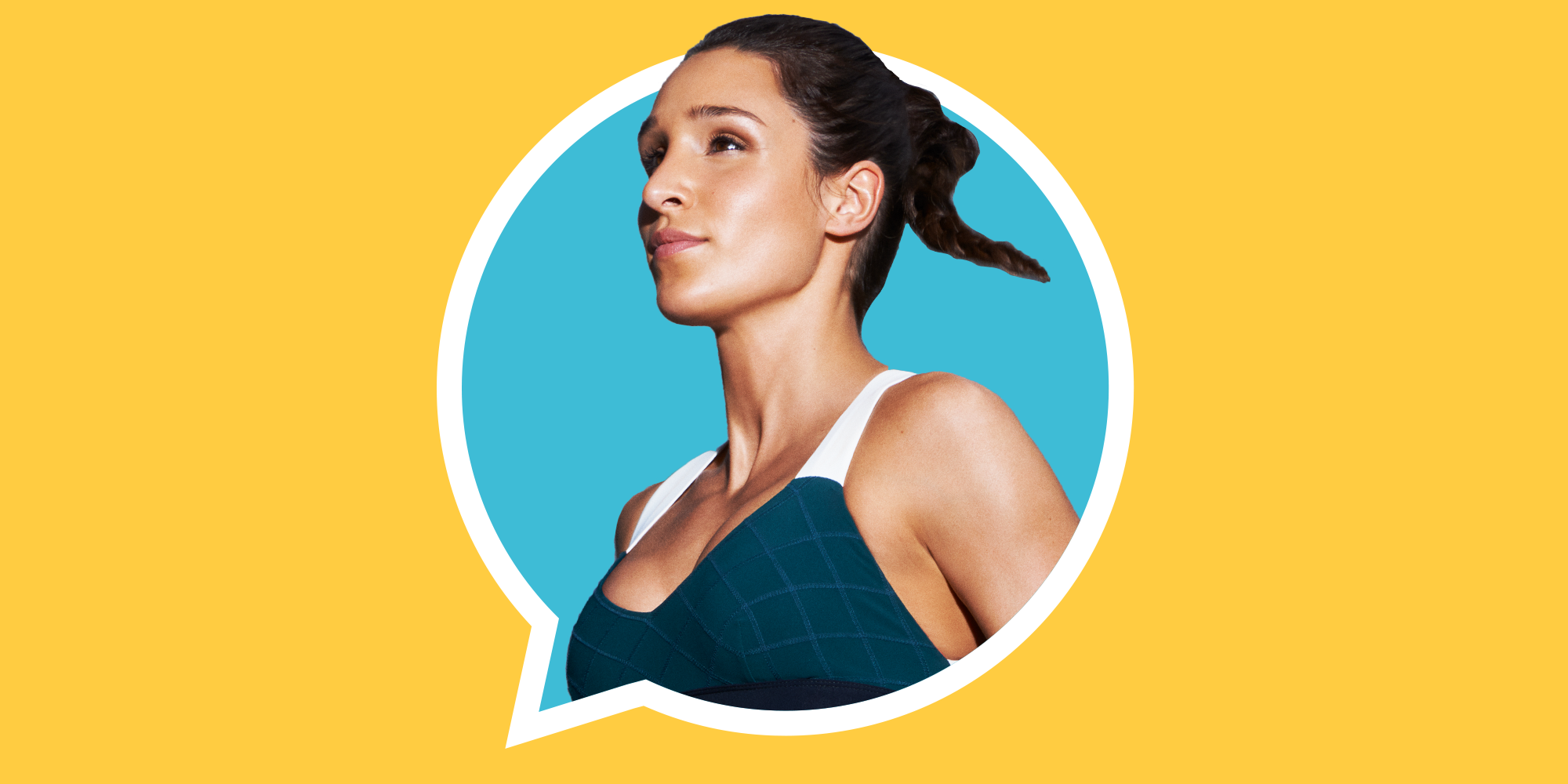 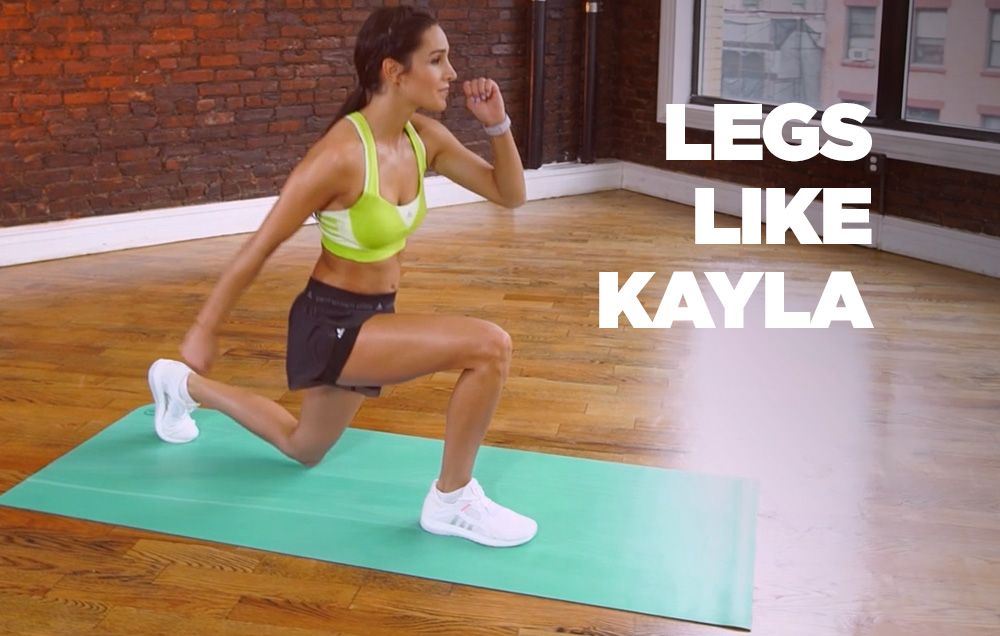 She also makes herself a salad. “I always make sure I have a side salad with my meal because I want to get my vegetables in,” Kayla says. “My main meals are like a protein and some rice or pasta, together or separate on a plate, and then my side salad.”

When Kayla doesn’t whip up a homemade lunch, she enjoys ordering Vietnamese or Thai food. Her fave dish is noodle- and veggie-packed summer rolls wrapped in rice paper.

Sometime in the afternoon, Kayla has her second cup of Turkish coffee.

She also takes the opportunity to get some more produce in. “My go-to snack, no matter if it’s pre- or post-workout is veggie sticks with dip,” she says. Her dip of choice is tzatziki, a yogurt-based Greek staple. And her fave veggies? Fennel, cucumber, carrots, and broccoli stems.

“I also love watermelon!” she says.

One thing you won’t ever see Kayla snack on? Cold cheese. It’s not a health thing, she just doesn’t like it. “I really don’t like a cold cheese platter, or cold cheese on a cracker,” she says. “I think that’s disgusting.” Melt it, though, and it’s a whole different story.

Kayla’s dinners are usually early, shared with her family, and consist of a veritable Mediterranean feast. “We have a lot of different things on the table,” she says. “We’ll cook two different meats and have a few different salads and a few different vegetable options and then some bread or rice on the side.”

Because it’s such a family affair, dinner is usually Kayla’s largest meal. “I always have a big dinner,” she says. A few of the fam’s fave: roasts, barbecue, gyros, or kebabs.

After dinner, Kayla puts her daughter to bed and finally gets in her sweat for the day around 7:30 p.m.

In true Kayla fashion, desserts aren’t off-limits. She always enjoys Greek cakes at her grandparents’ house. “I’ll never say no to [that],” she says.

At home, she munches on chocolate. “I’m all about balance. I love a bar of chocolate,” Kayla says. “I just don’t eat the entire block and I think that’s the difference. I have a few pieces and I’m all good.”

Another sweet-satisfier: fruit. “I have homegrown fruits most of the year.”

You won’t find her sipping on wine or cocktails in the evening, though. “I don’t drink alcohol so I just have water,” she says. “Maybe at night, I’ll have a cup of tea, like a cranberry or pomegranate tea, but I don’t really enjoy anything other than water.” You’d better believe Kayla is well-hydrated as a result! She estimates she drinks 2.5 to 3 liters of water per day. #Goals.