As temperatures start to dip and we settle back into our favorite sweaters, the time has come to whip up some comforting meals for dinner.

And no chef has soothed me more over these last few months than Ina Garten, who understands that sometimes you just need a cocktail at 9 a.m.

So when I discovered that the "Barefoot Contessa" star has a penne recipe with five different cheeses, I knew I had to try it for myself.

The delicious dish only has a few simple steps. And just one bite revealed that it has the power of a warm blanket, roaring fireplace, and mug of hot cocoa — all wrapped up into one cheesy bowl.

This isn't the first time I've made one of Ina Garten's pasta dishes. 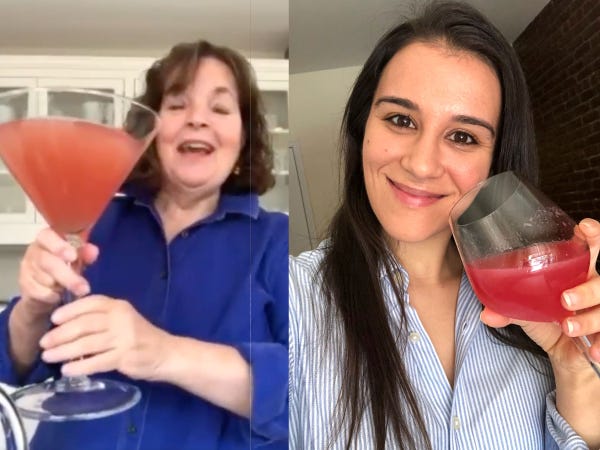 When I lived like the "Barefoot Contessa" star for a day earlier this year, I whipped up her broccoli and bow ties recipe. But I was an even bigger fan of Garten's summer garden pasta, which I made just a few weeks ago.

Straight from the farmstand to dinner – Summer Garden Pasta. I marinate cherry tomatoes in olive oil, basil, and garlic for four hours, then cook some pasta and toss them all together. So fresh and so delicious! Recipe on barefootcontessa.com. @pikefarms #treatyourself

Both of these dishes rely solely on olive oil, veggies, and herbs for their flavor. Garten's five-cheese penne was clearly going to be a very different experience, and I was excited to see how the red-sauce pasta would compare to her lighter fare. 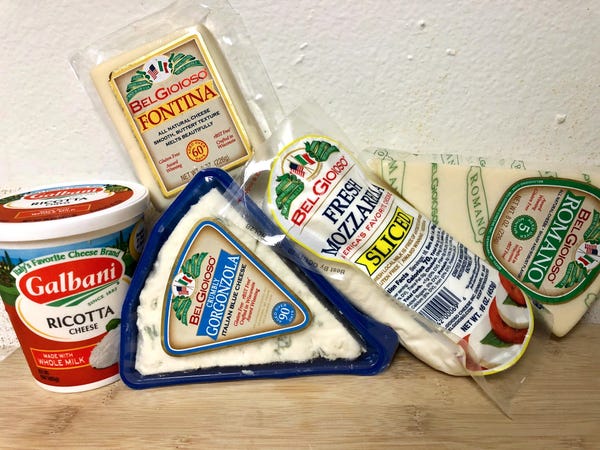 To whip up her five-cheese penne, you'll need:

To be honest, the most time-consuming part of Garten's recipe was just trying to find these cheeses at my local Ralph's. I no doubt confused at least a few fellow shoppers as I frantically circled the small cheese section about 100 times in search of ricotta (which, I later discovered, was in a completely different aisle).

I should also admit that I got Romano cheese instead of Pecorino Romano, which I couldn't find in the supermarket's little fromagerie no matter how hard I tried. I did a quick Google search — "is pecorino the same as romano?" — and was convinced that they were basically the same. I later learned that the Romano I had purchased was made with cow's milk, while Pecorino Romano is always made with sheep's milk.

But alas, they're both still in the same family and known for their sharp flavors, so I think the cheese gods will forgive me on this one. 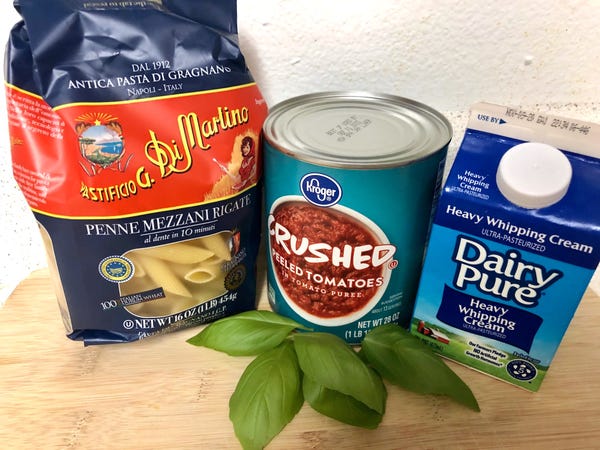 On top of all that cheese, you'll need:

To prep, I preheated my oven to 500 degrees Fahrenheit and started grating and measuring out my cheeses. 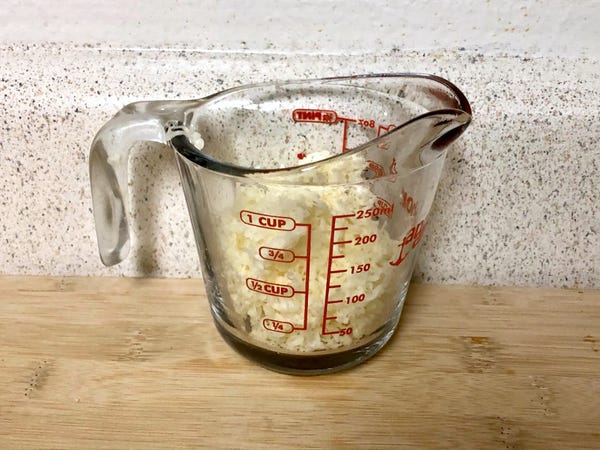 This is the only part of Garten's recipe that actually requires a little work. I hadn't bought pre-shredded fontina or pre-crumbled Gorgonzola, so I decided to just grate them as well. And let me tell you, it was definitely an arm workout. Next time, I may just finely chop the fontina instead, as its creamy texture made it a tad trickier to work with the grater.

You could, of course, always just eyeball how much cheese you want to add to this dish. But I have a tendency to mess up recipes and, since I was subjecting two other people to my cooking that night, I decided to play it safe. No shame in learning!

I couldn't help but admire all the beautiful cheeses in my mixing bowl. 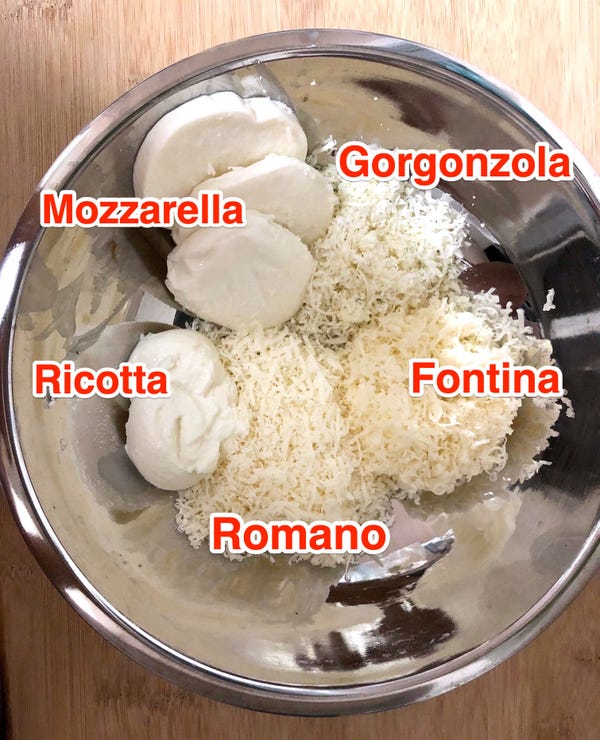 From the creamy ricotta to the sharp Romano, I was excited to see just how all these different flavors and textures would end up blending together.

After I finally stopped staring at my cheese, I added the crushed tomatoes and heavy cream. 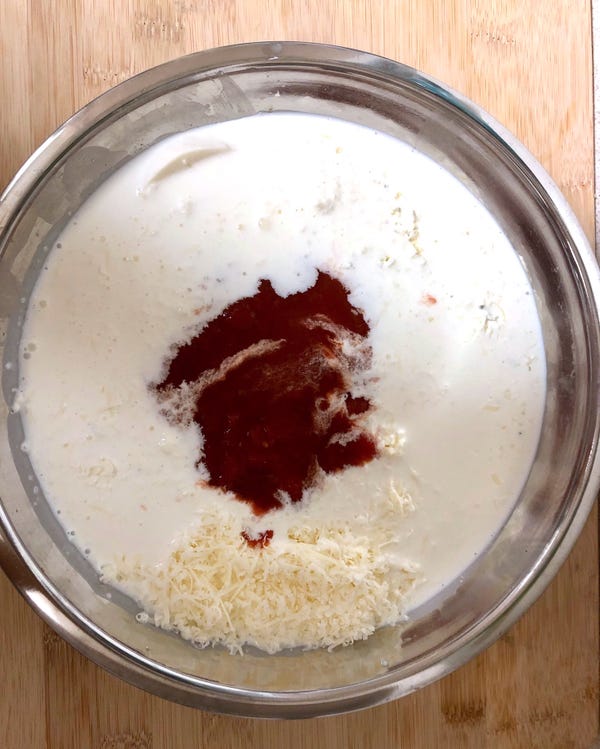 Garten's recipe calls for two cups of heavy cream and one cup of crushed tomatoes in a tomato puree.

I also chopped up some basil to throw on top. 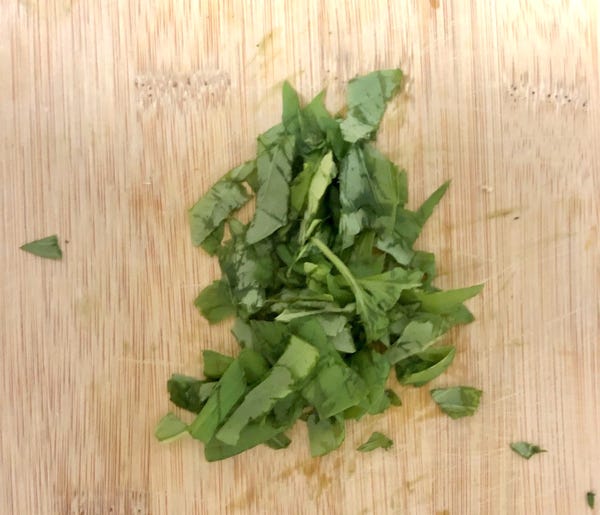 And just before I mixed everything together, I started cooking my pasta. 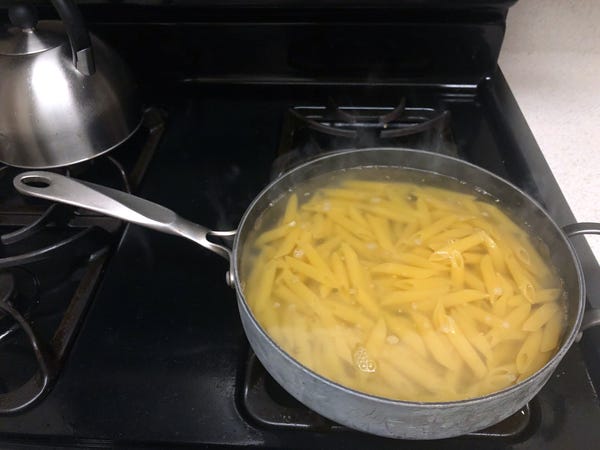 Garten actually recommends getting your pasta going before you begin. Since I'm a novice chef, and usually take a lot longer when I'm learning a recipe, I decided to get my prep out of the way first so I wouldn't get stressed about the penne.

And, per Garten's recipe, you're not actually supposed to fully cook the pasta. You just need to parboil the penne for four minutes in a pot of salted water.

After I dumped my pound of pasta into the pot, I set a timer and went back to my bowl of cheese.

As I mixed the cheesy sauce, I watched as it turned into a surprising shade of millennial pink. 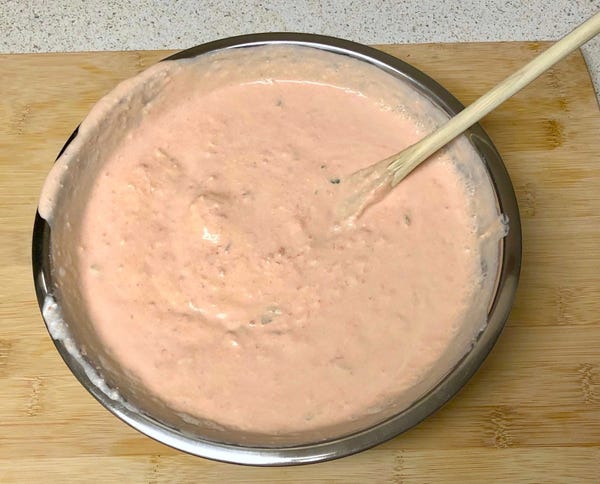 Who knew Garten's pasta would be so on trend? The color was actually quite pretty, and not at all what I had expected.

The recipe simply says to combine the ingredients and "mix well." I did wonder just how long I was supposed to mix them for, and if I was supposed to break up the mozzarella slices. But Garten's instructions were simple, so I tried not to overthink the process.

After draining my parboiled noodles, I put them back into the same pot and added my cheesy pink mixture. 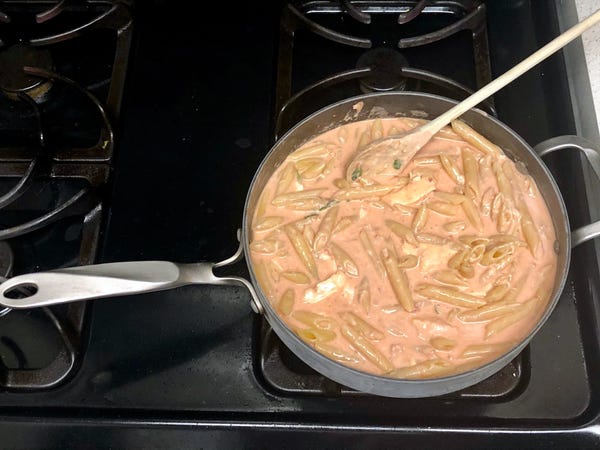 Garten recommends dividing your pasta into "shallow ceramic gratin dishes." I don't even own a proper stove pot, much less pretty cookware! But I realized that this dish could easily turn into a one-pot recipe, and who doesn't love dealing with less dishes?

I then tossed the penne with the mixture, making sure all the noodles were submerged in the pretty pink pool of cheese.

And just before popping my pasta in the oven, I added some butter. 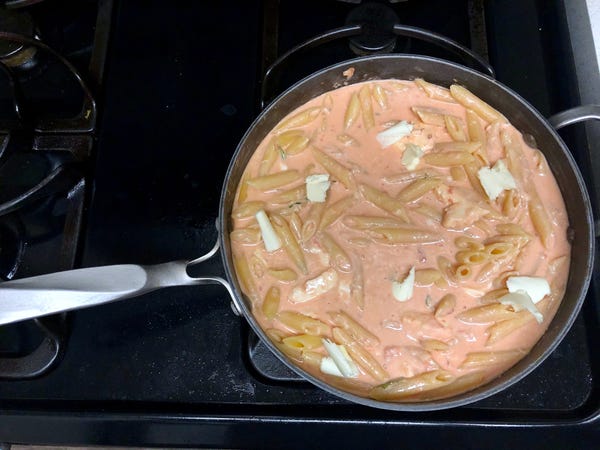 As much as I love Garten, I have to admit that I did go against her recipe on this last step. The "Barefoot Contessa" star recommends using half a stick (four tablespoons) of unsalted butter to dot your penne pasta with, which, to be honest, sounded very overwhelming.

My friend Molly, who is far more experienced in the kitchen than I am, confirmed that ½ stick of butter would be too much — especially paired with all that cheese. So I decided to take the recipe down to just one tablespoon, using a knife to shave off little knobs of butter that I sprinkled right on top of the pot.

It took less than 20 minutes to bake the pasta. 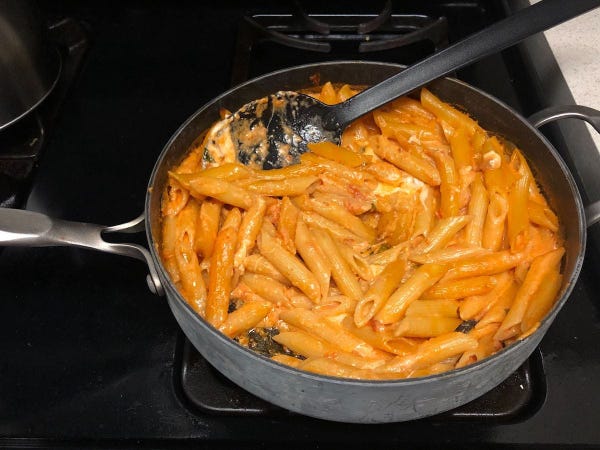 Garten's recipe recommends cooking the pasta until it's "bubbly and brown" on top, which she estimates will take around seven to 10 minutes.

As I waited for the pasta to cook, the delicious smell of cheese completely filled the kitchen. And, as the minutes ticked by, I could hear the penne start to bubble.

Of course, every oven is different. Overall, it took my pasta about 17 minutes total to bake. I waited until I could see that the penne in the center of my pan was turning brown before I took it out, ensuring it had cooked through.

The pasta came out looking glorious. 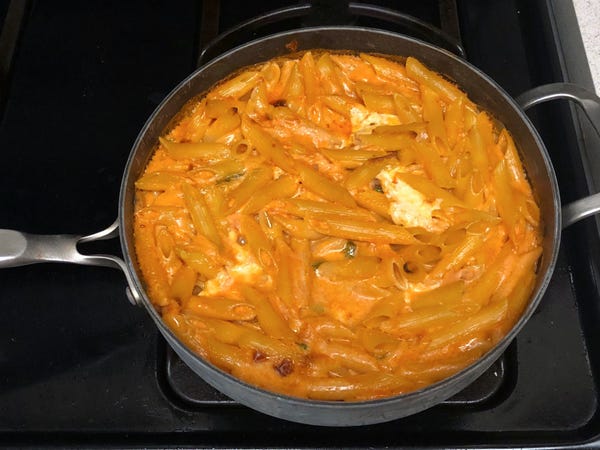 The millennial pink turned into a beautiful, almost golden, color, and there appeared to be an even crust on the top of the pasta.

The chunks of mozzarella that had floated to the top made the dish look even more inviting. I already felt soothed, and hadn't even taken my first bite.

And it tasted so good we went back for seconds. 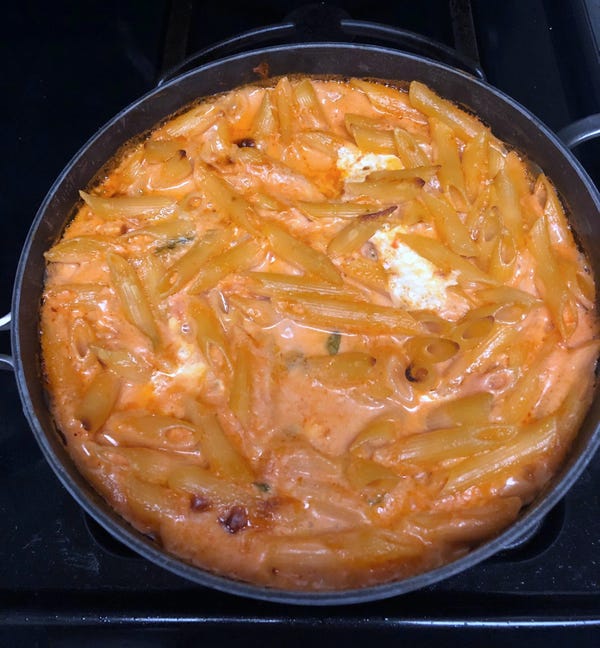 As much as I love very saucy pastas, I did wonder if five different cheeses — plus plenty of butter and cream — would be too much. I worried that the dish might taste more like cheese with a side of pasta, rather than the other way around. But my fears were unfounded. Garten's penne manages to be rich and soothing, without feeling too heavy on the stomach.

"All that cheese," my friend Molly happily exclaimed as she took her first few bites. "It tastes like a warm blanket."

"But the cheese isn't overwhelming," added my roommate Joe, who was also on taste-test duty.

Molly recommended sprinkling some red pepper flakes on top to cut the pasta's richness just a bit, which ended up being a great addition. And I loved the contrast between the crusty pieces and the gooey cheeses, which had sunk inside the penne and would burst with every bite.

Garten's five-cheese penne is definitely a must-have dish for the fall and winter seasons. 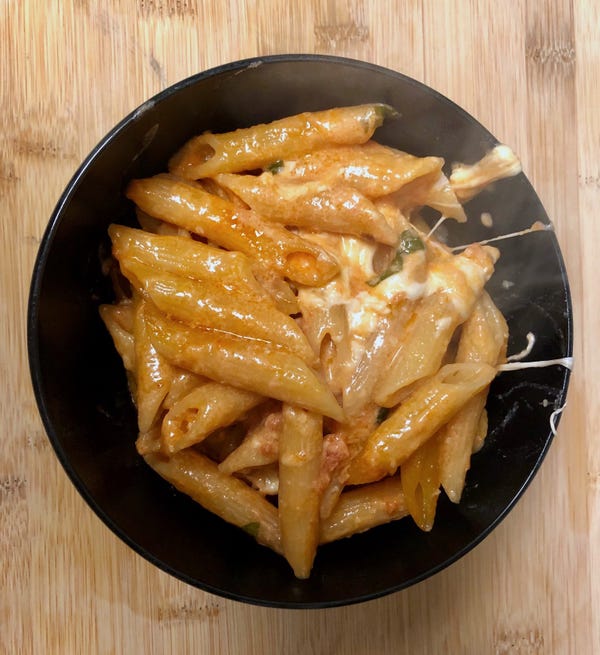 It's been a tough year for everyone, and the incoming colder weather probably won't make things any easier.

But there are few things more comforting than food, and I'll definitely be wrapping myself up in this cheesy blanket of goodness for months to come.