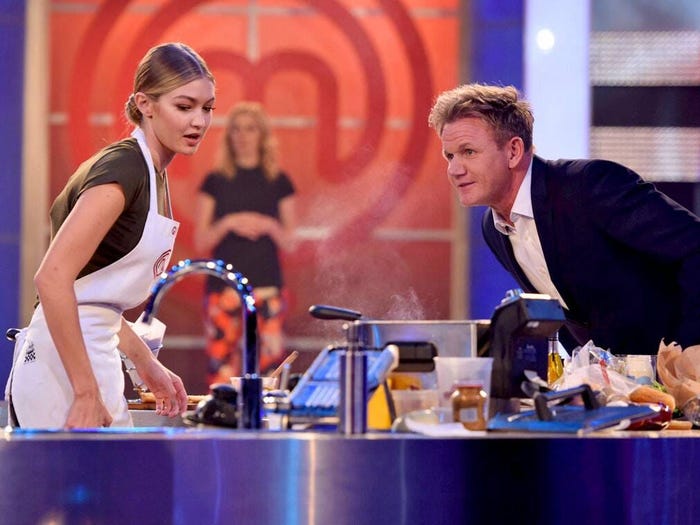 "MasterChef" judge Gordon Ramsay met supermodel Gigi Hadid back in 2016 when she competed on a celebrity version of the cooking competition.

Though Hadid walked away from the showdown with $25,000 for The Global Lyme Alliance for Lyme Disease, she also developed a long-lasting friendship with Ramsay. And for that, Ramsay's daughters are thankful.

"My daughters, they love me," Ramsay joked with People magazine. "It's not because I'm a f—— good chef. They love me because I talk to Gigi Hadid. That's the only reason why they want to talk to me."

In an interview with Insider earlier this month, Ramsay said Hadid will often send him photos of dishes she's proud of and wants his opinion on. He said, "She did this pasta a couple of weeks back and she sent me the picture and said, 'Hey, Chef, what do you think?' And I was blown away by what she did."

Ramsay even touts the model as "one of the most sophisticated foodies on the planet."

"It's fascinating watching Gigi Hadid's performance [in the kitchen]," he told Insider. "I remember when she first came on 'MasterChef' and we had an amazing couple of days cooking together."

Though he jokes that his daughters only like him for his famous friend, Ramsay told People that his whole family has bonded tightly since quarantining together.

"The bond has felt like cramming 10 vacations all at once, handed on a plate, and garnished with parsley," Ramsay told People. "We've laughed, we've cried, we've fallen in love, we've fallen out of love, and we came out of it so much stronger together. There's a level of closeness like we've never had before."