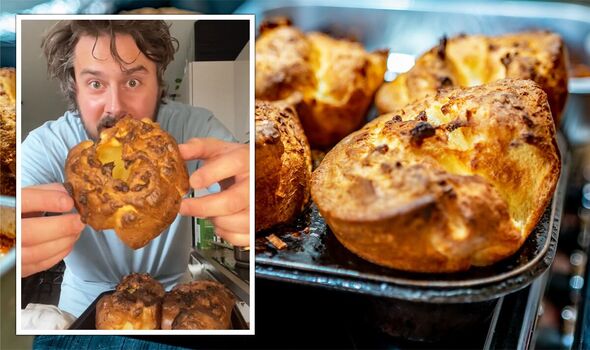 Martyn Odell, or Lagon Chef, is “a self-titled Food Waste Disruptor”. He also boasts a huge number of followers to go to the foodie to solve their cooking woes. He shares recipes, like this Yorkshire pudding recipe, with his 869.9K followers on his TikTok account @lagomchef and on his Instagram account @lagomchef. He also generously offers a free recipe book.

The chef detailed a number of clever tricks to make your Yorkshires amazing. His first clever tip tackled how to stop the oven from getting dirty and smokey when cooking Yorkshires. He said: “If you’ve got a bit of oil put it in another tray because they might overflow and smoke the oven out.”

The enthusiastic chef when on to discuss the “principle” of Yorkshire puddings. He said: “You don’t want it floppy because if it’s floppy and you pull it out, it’s just gonna fall down. What you want it to do is when it cooks you want it to rise. Then slowly, gradually, you get to that climactic point when it’s got a lot of structure in it, and it holds

“How do we do that? We give it time. So we cook it for 20 to 25 minutes. “That’s going to give you the structure so it’s going to rise, it’s going to set, it’s going to harden, it’s gonna stay.” He warned if you cook the Yorkshires too quickly, they will initially rise but then they will be floppy in the middle and they will collapse.

For the second clever trick, he explained how to make a batter without any particular measuring equipment. He said: “All you do is use the same measures of a cup, get a cup, any old cup. Then he puts in equal amounts of flour, milk, and egg, and then some salt.”

The viscosity of the batter is also crucial. The chef explained: “If your batter is too thin, it’s just going to get crispy and it’s too thick, it’s going struggle to rise. So what you want is like a thin pancake batter mix.”

He then pre-heated the oven, and while it was heating he put the batter in the fridge. The chef claims the hot oil and the cold batter combined to create a good rise in the Yorkshires. Then he cooked them for 20 to 25 minutes.

“Look at them, they’re monsters. They’re just ginormous,” the thrilled chef said when he took the large Yorkshire puddings out of the oven.

DON’T MISS
Mum’s ‘heavenly’ roast potatoes recipe: ‘Crispy’ on the outside [FOOD]
‘These are the best potatoes you’ll ever eat’ [RECIPE]
‘Crispy’ smashed roast potatoes are ‘so easy to make’ [HACK]

Martyn’s fans were quick to praise the recipe. One said: “That’s the best YP recipe ever! used it for years.”

Another said: “That second tray hack is genius! No oil everywhere!” One remarked: “I’m making my first ever home made Yorkshire puddings tomorrow so this has come in very handy. Thankyou!”