The World Central Kitchen founder, who has stepped up to feed millions of Americans in need during the coronavirus pandemic and brought meals to law enforcement personnel during the riot at the Capitol Building, is slated to participate in Wednesday’s Inauguration Day evening programming alongside the likes of Tom Hanks, John Legend and Jon Bon Jovi. The chef’s specific role in the evening’s activities was not disclosed.

The chef and his team have been cooking all week ahead of Wednesday’s ceremony. Videos posted to Andrés’ Twitter account show the chefs at Jaleo, his Spanish tapas restaurant in DC, preparing the meals. And as recently as early Wednesday morning, World Central Kitchen’s director of food operations, Chef Tim Kilcoyne, had delivered soups and sandwiches to National Guard troops.

“UPDATE from @cheftkilcoyne outside the U.S. Capitol tonight as we deliver hot chicken soup & sandwiches to our National Guard troops and other agencies standing watch through the chilly night,” tweeted World Central Kitchen just after midnight on Jan. 20. “This group is from Colorado, where we crossed paths during recent wildfires. #ChefsForDC”

A slew of supporters, including one guardsman sent messages of gratitude and appreciation not only to Andrés, but to all locals who are helping them out.

“Thank you to all the local businesses, restaurants, and citizens of Washington, D.C.,” said one guardsman in a video shared by Andrés. “You all have been taking care of us, you’ve been going out of your way to take care of us, giving donations, food, coffee, things like that to help support the troops, and we really do appreciate it guys, thank you so much.”

Congressman for New Jersey’s 3rd district Andy Kim, a former White House National Security Official tweeted, “You’ve probably seen photos of the National Guard service members in DC protecting our democracy. You may not have seen who is feeding them: @chefjoseandres and the amazing team at @WCKitchen #LookForTheHelpers” 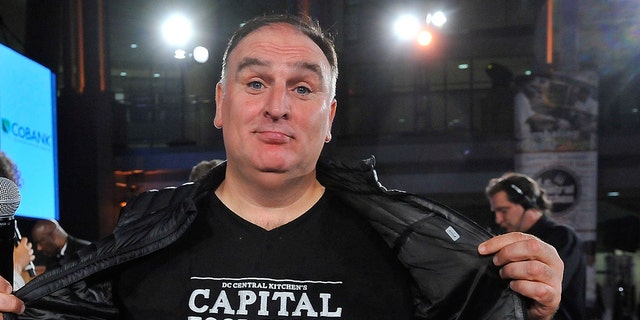 A number of other restaurants and restaurateurs in the D.C. area have teamed up to help support the troops and are willing to match customer donations with food for service members. D.C. pizza shop We the Pizza said last week it will be delivering hundreds of pies to National Guard Troops stationed at the U.S. Capitol Building days before President-elect Joe Biden’s inauguration Wednesday. The pie shop is joining several local restaurants, including Buffalo & Bergen, District Doughnuts and CHIKO, among others in the area, to match every pie or food item that is donated to the National Guard.