The mystery of the “Fake Burger” has been solved – and it’s a carb-tastic feast.

Burger King Japan announced its “Fake Burger” last week, which went on sale Oct. 23 for only two weeks. At the time of the announcement, the fast food chain was not revealing what made up its newest menu addition.

Well, now, it has been revealed – the “Fake Burger” is no burger at all, but instead a french fry sandwich, aka a chip butty. 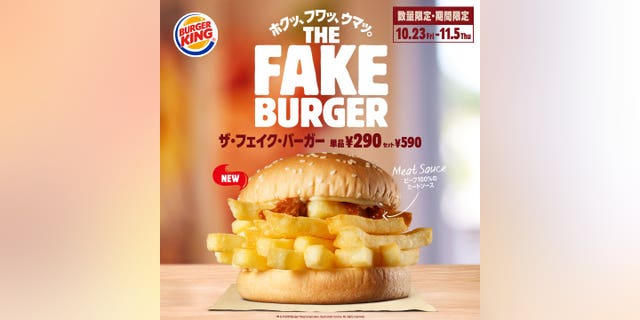 The roughly $2.75 rendition of the U.K. classic is made up of layers of thick-cut crispy french fries, topped with a “meat sauce” that is minced beef and mayo, all piled on a burger bun, according to HypeBeast.

Unsurprisingly, people on Twitter had opinions about the potato-heavy meal, which, yes, can also be made into a “meal” that comes with more french fries and a drink on the side.

While Japan seems to be splitting its fan base with its limited-time only “burger,” Burger King locations in Sweden and Denmark are terrifying their customers with a Halloween stunt trolling its main competitor, McDonald’s.

Burger Kings in these nations are running a Halloween promotion that allows guests to summon a vision of Ronald McDonald, Business Insider reports. Certain locations have installed software in the bathrooms that can detect a certain phrase when customers speak it.

If customers say the phrase “canceled clown” three times, the software will dim the lights and play a visual effect on a screen that’s located behind the mirror, making it look like the clown has appeared.