Samuel Parker gave Madeline Hollander a piece of jewelry before they had gone on even a single date. It was an earring she had lost at La Caverna, a club in the Lower East Side of Manhattan, where they were both celebrating the opening of the 2019 Whitney Biennial.

“I was for a very long time on all fours using my phone as a flashlight crawling around the dance floor,” said Ms. Hollander, 35, an artist and choreographer whose first solo museum exhibition, “Flatwing,” opened at the Whitney in March. “It was not the prettiest scene.”

Mr. Parker, 32, had been hoping to speak with her throughout the night, but struggled to find an opening. “I definitely clocked her arrival and was sort of playing it cool a little bit and waiting for kind of opportunity to chat,” he said. “She was dancing all over the place so it was difficult to find that moment.”

When he noticed that she seemed to be searching for something, he jumped in to join the hunt and before she could locate the gold hoop, which she had borrowed from her grandmother for the occasion, he found it among the crush of revelers. Less than a year later, in February 2020, Mr. Parker offered her another gold band, an engagement ring topped with an antique jubilee cut diamond and peridot gemstones, at his home in Los Angeles.

They were married on May 15 at his parents’ home in Kentfield, Calif., with 50 fully vaccinated guests. The couple’s friend, the artist Ian Cheng, who was ordained by the Universal Life Church for the occasion, officiated.

Ms. Hollander and Mr. Parker had crossed paths a few times before they connected at La Caverna, most notably in 2017 at Miami Art Week, where both were working, and in 2019 at Jeffrey Deitch Gallery in Los Angeles at the opening of Urs Fischer’s exhibition “PLAY,” to which Ms. Hollander contributed choreography. Each encounter was fleeting, but they had an effect on Mr. Parker, the founder and principal of Parker Gallery in Los Angeles.

“I for one definitely knew that there would be something happening here again later in our future,” he said. 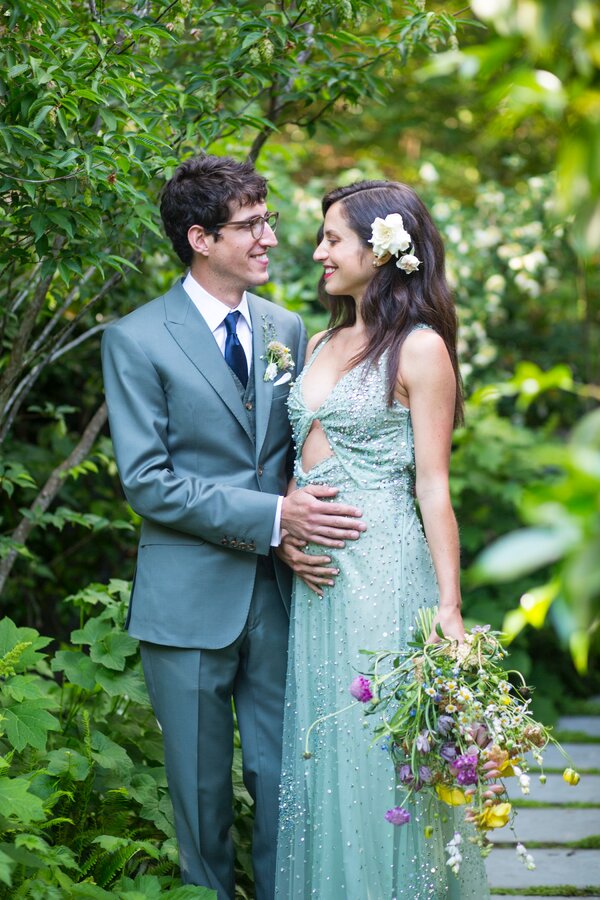 They spent the remainder of Mr. Parker’s trip to New York together, and after he returned to Los Angeles they regularly shuttled back and forth between two cities. Ms. Hollander was born and raised in Los Angeles and frequently traveled there for film and art projects, and Mr. Parker’s gallery has a private viewing room in the West Village, so they were both accustomed to splitting their time between the two places.

When New York went into lockdown in March 2020, just a month after they got engaged, the couple decided to leave quickly to avoid getting stuck in the city. Though Ms. Hollander had been planning to move West, she didn’t realize, boarding a last-minute flight to California, that she was taking that step.

“I thought I was going to be there for two weeks,” she said. It wasn’t until September that she returned to New York to pack up her apartment and officially relocated to Los Angeles.

The couple described the pandemic period as a welcome respite from their busy, travel-heavy lifestyle.

“That was a horrible time for the world and there was a lot of fear and anxiety,” Ms. Hollander said. “But we were extremely lucky to be able to just have that time to be together.”

Adding to their prewedding bliss was the news, in January 2021, that they are going to be parents in September.

The timing didn’t surprise Ms. Hollander. At the wedding, she remembers thinking: “It feels characteristic of this baby to want to be present for this event.”