A BRIDE-to-be shared a photo of her unusual engagement ring gushing about her new fiancé – but her diamond-free ring has been mocked online.

Announcing her engagement on social media, the woman proudly showed off her new piece of jewellery. 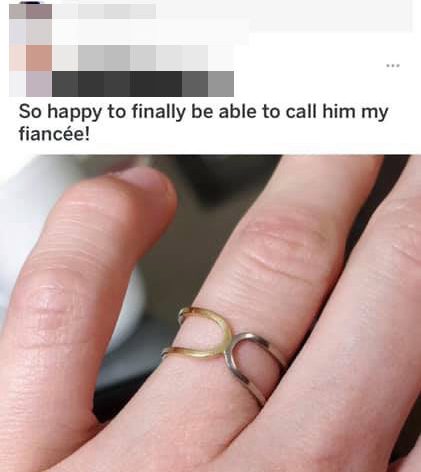 She said: “So happy to finally be able to call him my fiancée!”

Her engagement ring is made of both gold and silver, but it doesn’t feature any diamonds or precious stones of any kind.

Instead the two metals meet in the middle in a U-bend shape, but the quirky design hasn’t gone down well online.

The photo ended up on Facebook group That's It I'm Ring Shaming, where it's racked up dozens of confused comments. 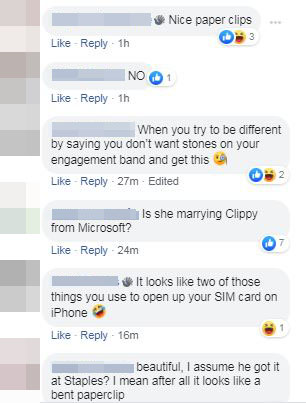 People have compared her ring to a paperclip, with some asking if she's marrying Microsoft Office assistant 'Clippy'.

Another said: “When you try to be different by saying you don’t want stones on your engagement band and get this.”

A third wrote: “Is she marrying Clippy from Microsoft?”

While this person added: “It looks like two of those things you use to open up your SIM card on iPhone.”

And another commented: "Beautiful, I assume he got it at Staples?

"I mean after all it looks like a bent paperclip."

Meanwhile we revealed one bride decided to throw a fake wedding – then proposed to her unsuspecting boyfriend in a white bridal gown.

Plus this bride was fuming after her brother ditched her wedding to dog sit instead.

And this elderly guest caused panic after she walked straight into a swimming pool in the middle of the reception.