On a handful of days in 2017 and 2018, when the humidity was low and the sky was free of smoke from burning sugar cane, Benjamin Hampton Ewing was able to look out from a ridgeline on Viti Levu, the main island in Fiji, and see something special.

At 6 a.m., Mr. Ewing would board a bus in the mountains of Viti Levu, where he was living. The bus would lumber toward Suva, Fiji’s capitol, zigzagging through switchbacks woven into the mountains. About 15 minutes into the trip, the riders would reach a ridgeline that looked out over peaks and valleys, and into the ocean beyond. Most of the time, Mr. Ewing couldn’t see anything past the water. But every so often, when it was very clear, he could make out a slice of land on the horizon, so faint it looked like a mirage.

Moments later, Thea Louise Mink, who was living on Koro Island, dozens of miles across the ocean, would notice her phone buzz. She would open it to find an excited text from Mr. Ewing, informing Ms. Mink that he could “see” her. 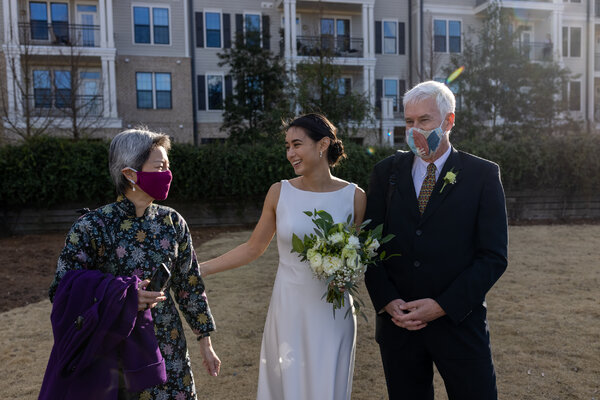 It was a romantic gesture. But neither Ms. Mink, now 28, nor Mr. Ewing, 33, had gone to Fiji looking for romance. They were there through the Peace Corps; both joined in 2016.

Ms. Mink, who grew up in Washington, D.C., had long been curious about volunteering with the Peace Corps. Her father had worked for the organization in Zaire (now the Democratic Republic of Congo) in the 1970s, and she had heard his stories growing up. By 2016, Ms. Mink was a couple of years out Tufts University, and she had a bit of a wanderlust. “It felt like the right moment to shake things up,” she said.

Mr. Ewing, who grew up in Atlanta, was at a different stage: He had graduated from Presbyterian College in Clinton, S.C., in 2010, had worked at a South Carolina boarding school for five years, and then had gone to Columbia University for a master’s in private school leadership. As his time at Columbia wound down, a roommate suggested that he apply to the Peace Corps.

The corps was their equalizer. When they met, Mr. Ewing and Ms. Mink, were fresh-faced volunteers embarking on a two-year assignment in Fiji. They got to know each other during their training weeks, where they would gather with their fellow volunteers before leaving for assignments throughout the country. That setting may have been an advantage.

“We first got to know each other in a group,” Ms. Mink said. “So we could kind of observe each other and see how we were with other people.”

Ms. Mink noticed that Mr. Ewing had a relaxed, unflappable personality. She was drawn to his dry sense of humor — which, she lovingly pointed out, “didn’t always land the way he intended.” Mr. Ewing admired Ms. Mink for the way she added ballast to the group. “When somebody is having a rough day, they naturally go to her,” he said.

For weeks, they kept their mutual admiration to themselves. Then, on the night before they were to split up for their individual assignments on different islands, Ms. Mink and Mr. Ewing went out celebrating with their fellow volunteers in Suva. It was a typical late-night bar scene — lights, music, sticky floors — with a conspicuous group of interlopers.

“It was all of us newly-minted Peace Corps volunteers and then the regular crowd at this Irish pub in downtown Suva,” Ms. Mink said.

She asked Mr. Ewing to dance. They took to the floor.

That could have been the beginning and the end of their romance. Mr. Ewing left for his assignment the next morning; Ms. Mink departed for hers shortly thereafter. But in the days that followed, as Mr. Ewing stood in the kitchen of his new home in a village in the mountains of Viti Levu, he thought of a way to keep the conversation going. Ms. Mink had once mentioned, in passing, a tip for making fried rice: use day-old rice. Mr. Ewing decided he would try out Ms. Mink’s method, and then call her to tell her about it. Having grown up on deep-fried Southern cooking, though, Mr. Ewing had a slight misconception about how to prepare that dish.

While not a culinary success (“Let me tell you, it was not good”), the fiasco gave him good reason to call Ms. Mink for advice. Their conversation quickly moved beyond cooking: They discussed the new experiences they were having, and the challenges they were facing in their early days in the field. At the end of their conversation, Mr. Ewing asked Ms. Mink whether he could call her that Sunday. She said yes.

The two started talking every Sunday at 8 p.m. The set time allowed them to steadily develop their relationship, but it also allowed them to limit what they each recognized was an affair of the heart that could overshadow their Peace Corps work if they didn’t set boundaries.

“We both showed up to actually get to know people in Fiji and to work with folks in Fiji,” Mr. Ewing said. “We were careful about not allowing our time to be consumed on the phone.”

Still, they came to rely on the calls for a sense of consistency during a time when their lives and their work was unpredictable and, at first, unfamiliar.

“It was something that we both really looked forward to,” Ms. Mink said. “We both felt really refreshed and rebooted for the next week — it was a nice thing to know that was going to be a constant.”

[Sign up for Love Letter and always get the latest in Modern Love, weddings, and relationships in the news by email.]

For months, phone calls were the primary way they communicated. Ms. Mink would sit on her bed, cocooned beneath a mosquito net, with her phone plugged into a solar-powered lamp that doubled as a charger. On the other end of the line, Mr. Ewing would do his best to keep moving around his small home — the better to keep warm on cold mountain nights. The two didn’t have to fuss over dates or introducing each other to friends and family, or any number of other things that they might have needed to think about if they were dating back home. They could focus, Ms. Mink said, on getting to know one another’s “brains and backgrounds,” in a way that she hadn’t quite experienced before.

They occasionally spent time together in person. Every so often, Ms. Mink would find a reason to take the weekly, overnight ferry to Viti Levu, where any extra time she had would be spent with Mr. Ewing. Once, she traveled to Mr. Ewing’s village to run a workshop on sustainable chicken farming.

During their second year in Fiji, they used saved-up vacation time to fly to New Zealand, where they spent three weeks traveling together in a camper van. For most of their first couple of years together, though, they had to communicate remotely.

They each returned to the United States in 2018. The distance between them, once covered by miles of ocean, shrunk; they moved in together in an apartment in Atlanta. And they began to get acclimated to life back in America, too.

“That readjustment period is really hard for all Peace Corps volunteers,” said Caitlin Barrow, a friend who met the couple in the Peace Corps. “It was really beautiful to see them supporting each other through that.”

The couple’s wanderlust remained. Mr. Ewing proposed on Dec. 31, 2018, and at one point he and Ms. Mink discussed having their wedding in the summer of 2020. They even ordered a pair of books, “A Practical Wedding: Creative Ideas for Planning a Beautiful, Affordable, and Meaningful Celebration” and “A Practical Wedding Planner,” both by Meg Keene, for inspiration. When it came time to sit down and plan out the wedding, though, Ms. Mink and Mr. Ewing got distracted looking at road maps; they ended up car camping in Montana that summer instead, as the wedding books gathered dust back home.

They ultimately settled on a small, outdoor ceremony in a park near their apartment this year in Atlanta. And so, on Jan. 17, Ms. Mink, now a graduate student at Emory University’s Rollins School of Public Health in Atlanta, married Mr. Ewing, now an educator at Pace Academy in Atlanta. Ms. Barrow, the friend who was one of the couple’s fellow Peace Corps volunteers, became a Universal Life minister to officiate as a dozen guests watched in person.

Defining the relationship in such tangible terms is a big change for the couple, particularly compared to their Fiji years. Looking back, one of the things Ms. Mink and Mr. Ewing appreciated about dating abroad is that they didn’t feel pressure to put a label on their relationship. For the longest time, they didn’t have to think much about whether they were officially a couple, because nobody from home was there to ask them.

“It was never a question, because it was never forced,” Mr. Ewing said.

The relationship “was allowed to be what it was,” he added. “Until it grew into more.”

The Setting A public park near the couple’s apartment. “We walk our dog on it every day,” Ms. Mink said. “It just feels like home.”

The Cameo Mr. Ewing’s high school English teacher walked by during the ceremony. (It was a public space, after all.) She offered her congratulations.

The Food “We called a Thai restaurant from around the corner,” Mr. Ewing said. The reception was on the outdoor rooftop deck of the couple’s apartment, which overlooks the park where they married. They spread patio heaters across the terrace.

The Car Mr. Ewing owns a Ford Model 48 coupe that his grandfather and his great-uncle bought new in 1935. When Mr. Ewing’s father inherited it, Mr. Ewing said, “you could see right through the floorboards, and if you touched it, it would tear your clothes.” Over time, Mr. Ewing’s father had it restored. Ms. Mink and Mr. Ewing took a celebratory spin in the car after their ceremony. But first, while the newlyweds posed for photos, Ms. Mink’s father covertly sauntered over to the back of the car, keeping out of their sight. Then he tied cans to the back.