Since their introduction 20 years ago at a US boat show in Fort Lauderdale, Crocs have wrinkled the noses of stylists, shoe worshippers and general observers with their confronting silhouette, but defiantly remain a sidewalk staple. With chief executive Andrew Reese predicting a 17 per cent annual growth rate to achieve $US5 billion in sales by 2026, the ‘ugly shoe’ continues to march on. 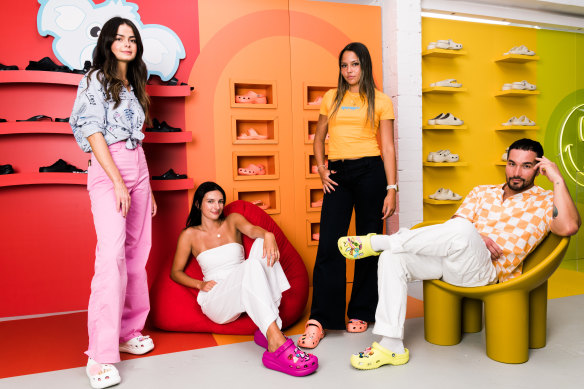 “Personally, the term ‘ugly’ is not my favourite one,” says Megan Welch, general manager of Crocs Asia Pacific. “Some people think we are an ugly shoe and some think that we are the best thing that has ever happened.”

“Crocs is a polarising brand, and we’ve really embraced that polarisation. It starts a conversation.”

When it comes to playing mirror, mirror, Crocs may no longer be the ugliest shoe on the market with serious competition from Teva’s strappy sandals, hippie throwback Birkenstock sandals, US brand Hoka and the entire Adidas Yeezy collection.

Their popularity has been fuelled by collaborations with luxury labels. In January, Dior menswear designer Kim Jones collaborated with Birkenstock on a pair of $2,700 felt wool mules. Hoka has worked alongside luxury ski wear label Moncler and designer Rick Owens, while Crocs has a more eclectic roster.

“Since appearing on the runway in Christopher Kane’s show in 2017 we have worked with Justin Bieber, 7/11 and KFC,” Welch says. “We never had an awareness problem but before 2017 we had a relevance problem. Now we are focused on partnerships with people like Post Malone and Australian artist G-Flip who believe in the brand.” There’s also an ongoing collaboration with Balenciaga, with the label selling Crocs on their website for $1,550. 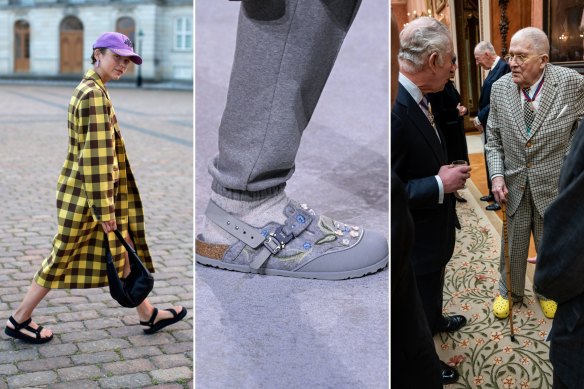 Swedish influencer Emma Fridsell, wearing black sandals by Teva, a black bag and a lili colored cap with the inscription “The strong sensitive type” during a stree at Copenhagen Fashion Week; Dior x Birkenstocks on the menswear runway in January; David Hockney with King Charles at Buckingham Palace in November.Credit:Getty

Despite the hard work, some people still have an ugly shoe awareness problem. When artist David Hockney wore Crocs to Buckingham Palace last month for an event with King Charles he was complimented by the monarch on his “beautifully chosen” pair of “yellow galoshes.”

The other blind spot is with stalwart stylists. Ugly shoes are used in fashion editorials to create tension between ultra-feminine skirts and dresses or classic jeans and T-shirt combinations, but rarely worn by the creators of the images.

“While residing in the wardrobe of some fashionable players, I can’t see their appeal,” says stylist Elliot Garnaut. “They’re still falling in the functional shoe category for me.”

“If you’re a chef, go for gold. If you’re heading out to brunch with friends, rethink your look. I can make the exception for a quick milk run or the McDonald’s drive through.”

“I know they’re cool, but I just can’t bring myself to wear them,” Clements says. “I’ll let this trend pass me by.”

Designer Julia Baldini, most well-known for working with Sydney designer Jordan Gogos on footwear for his runway shows, is pro ugly shoe.

“They make me think of spontaneous adventures, waterfalls and tropical gardens,” Baldini says. “I see the everywhere on people around Sydney and walking on the beach at Bondi.”

Baldini created an artwork using Crocs by weaving ribbons and colourful rope through the holes but Welch encourages customers to use Jibbitz, created by a Denver entrepreneur in 2004.

Jibbitz are accessories, ranging from crystals to skulls, that can be affixed to Crocs’ holes. In 2006, the Jibiitz business was acquired by Crocs for $US10 million. The most recent Jibbitz collaborations have been with rapper Saweetie and country singer Luke Combs.

“It’s just another way of making the shoe for everyone,” Welch says. Well, almost everyone.

“Even with Justin Bieber and Drew House doing Jibbitz, it’s a no,” Garnaut says.

Ugly is still in the eye of the beholder.