And royal fans can't help but compare the Duchess to her mother-in-law Princess Diana, who wore a strikingly similar outfit during her own trip to Pakistan in 1996. 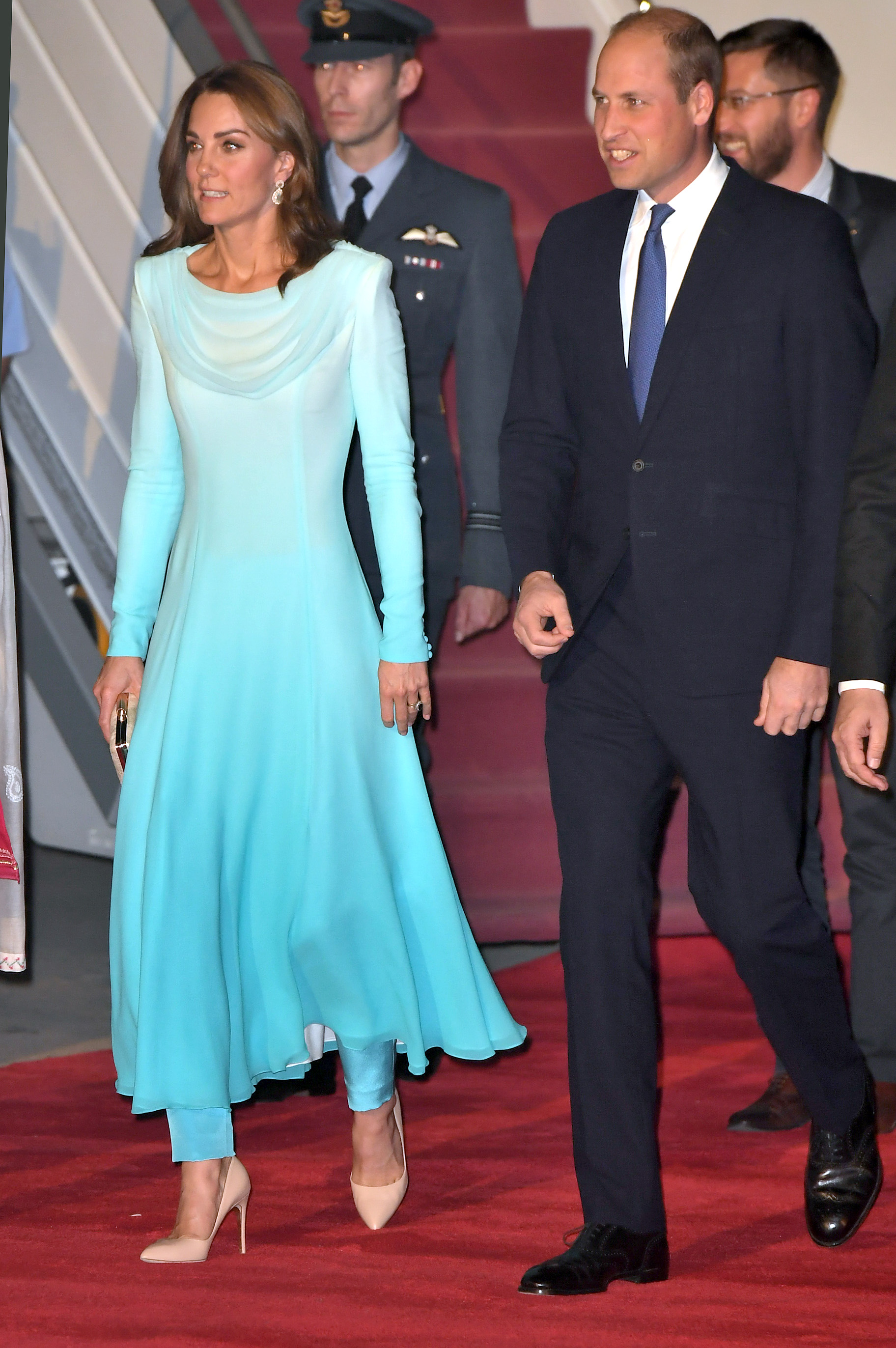 The 37-year-old wore the national dress of Pakistan – a long shift over the top of trousers – as she arrived at Nur Khan air base.

The turquoise, bespoke outfit appeared to be ombre in colour, with a lighter shade transitioning into a deeper hue towards the hem.

And the look was very similar to a style Diana wore when she visited over 20 years ago.

The Princess of Wales also chose to wear a blue style, but teamed her buttoned look with light blue ballet flats. 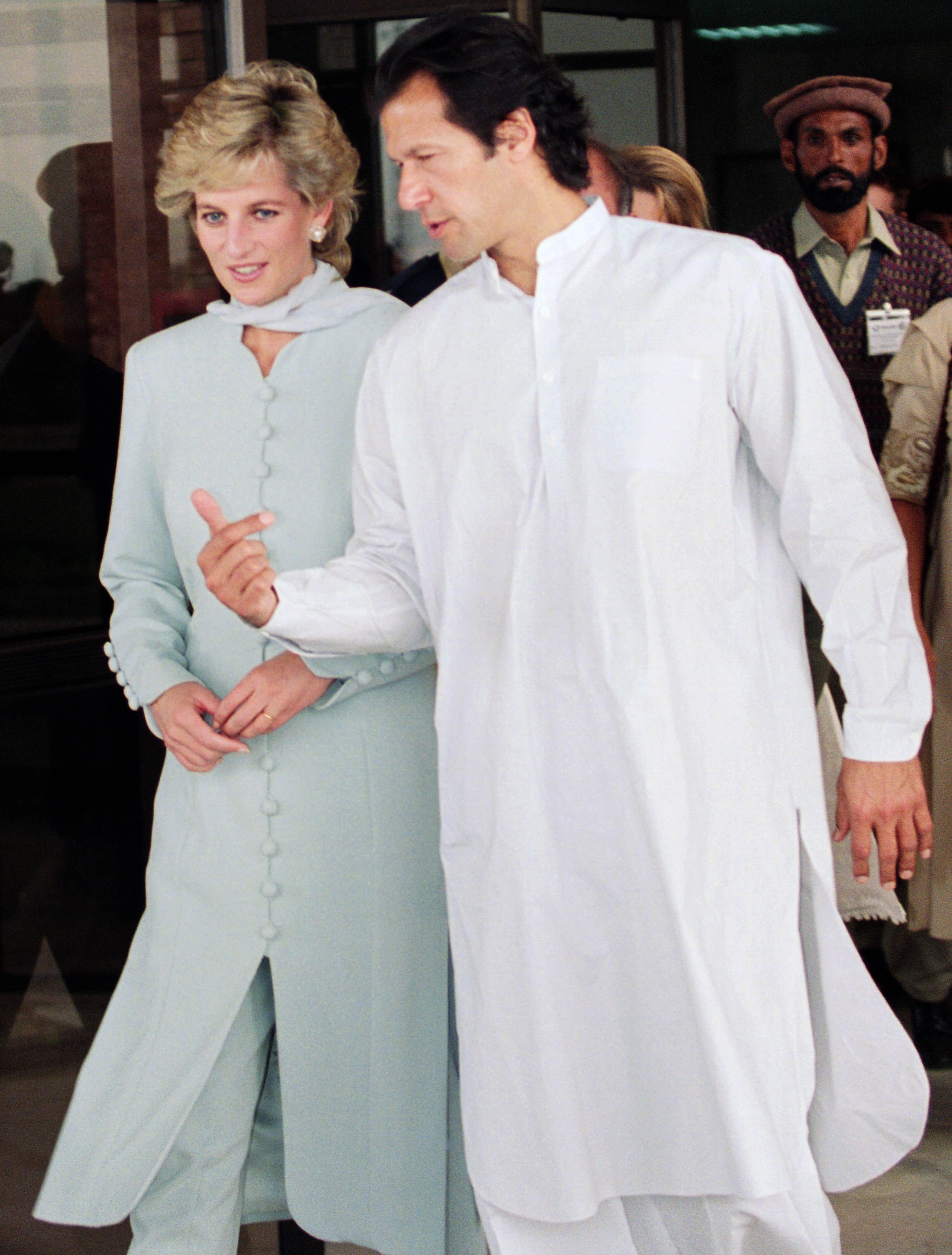 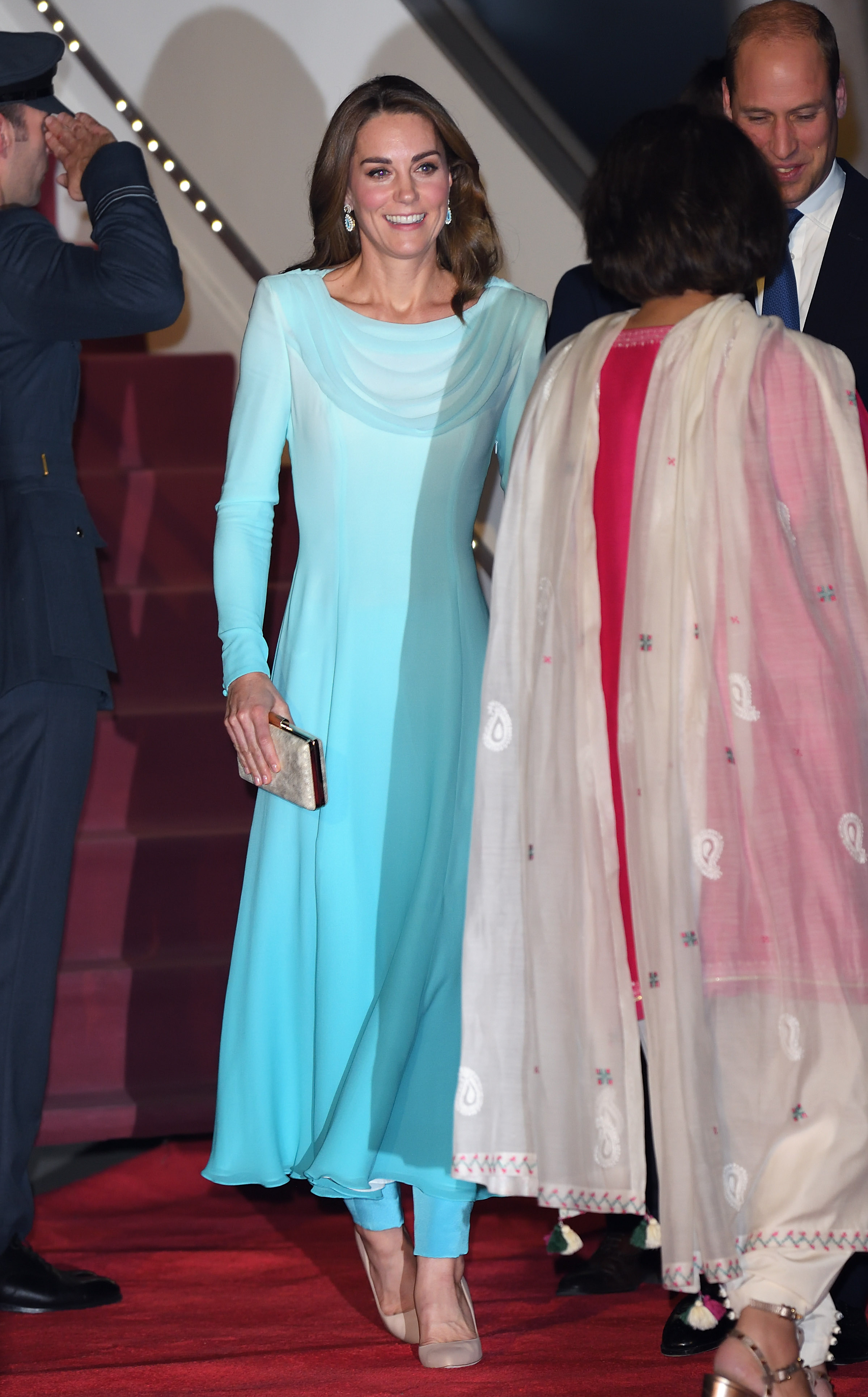 Kate, meanwhile, paired her look with nude heels and wore her hair down with a pair of dazzling earrings.

Speaking about the outfit, royal correspondent Emily Andrews said: "The Duke & Duchess of Cambridge arrive in Pakistan at Nur Khan air base in Rawalpindi.

"Greeted by the British High Commissioner and a Presidential honour guard.

"Kate’s shalwar kameez by Diana’s fave Catherine Walker [is] a nod to her host country." 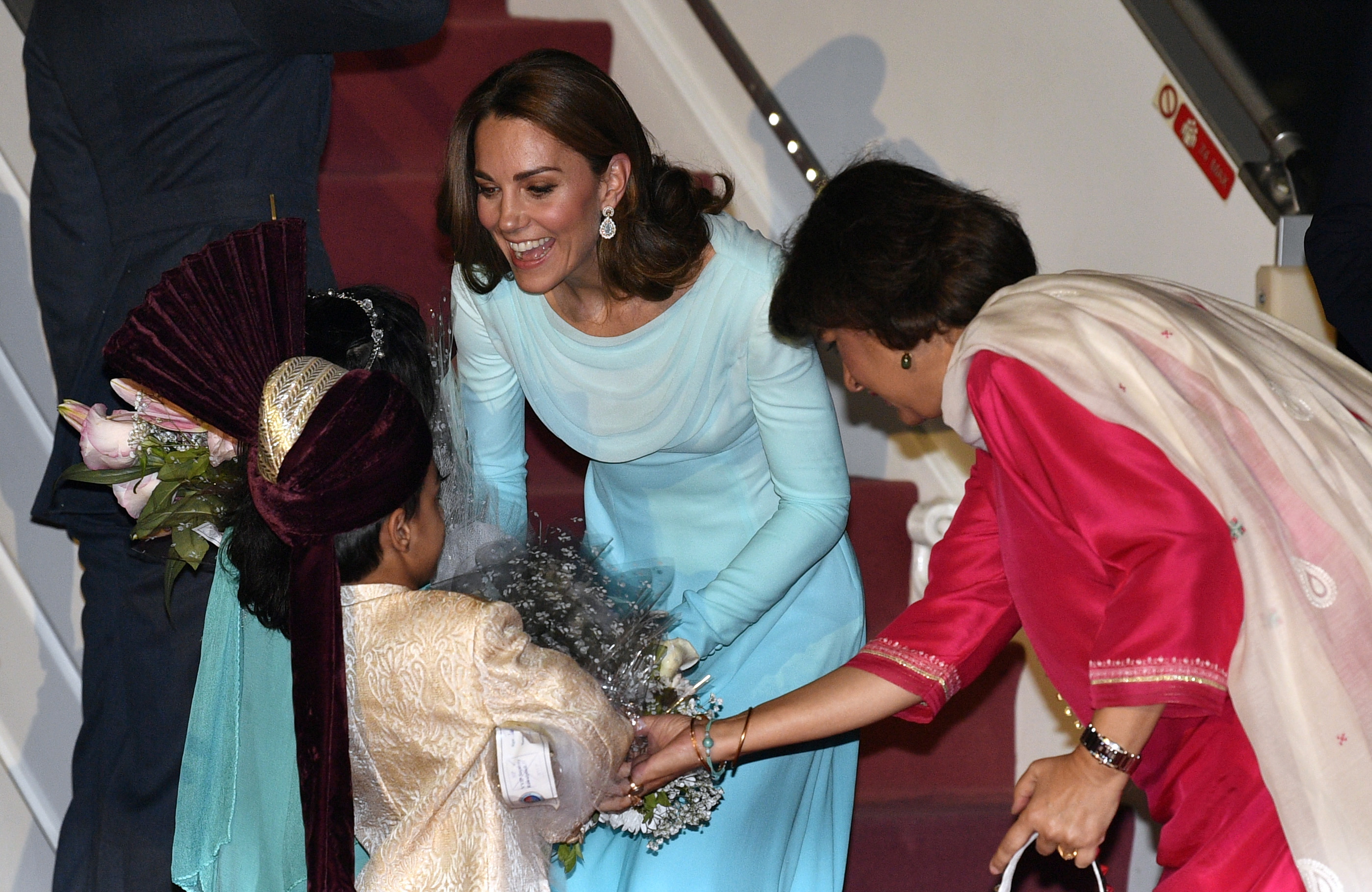 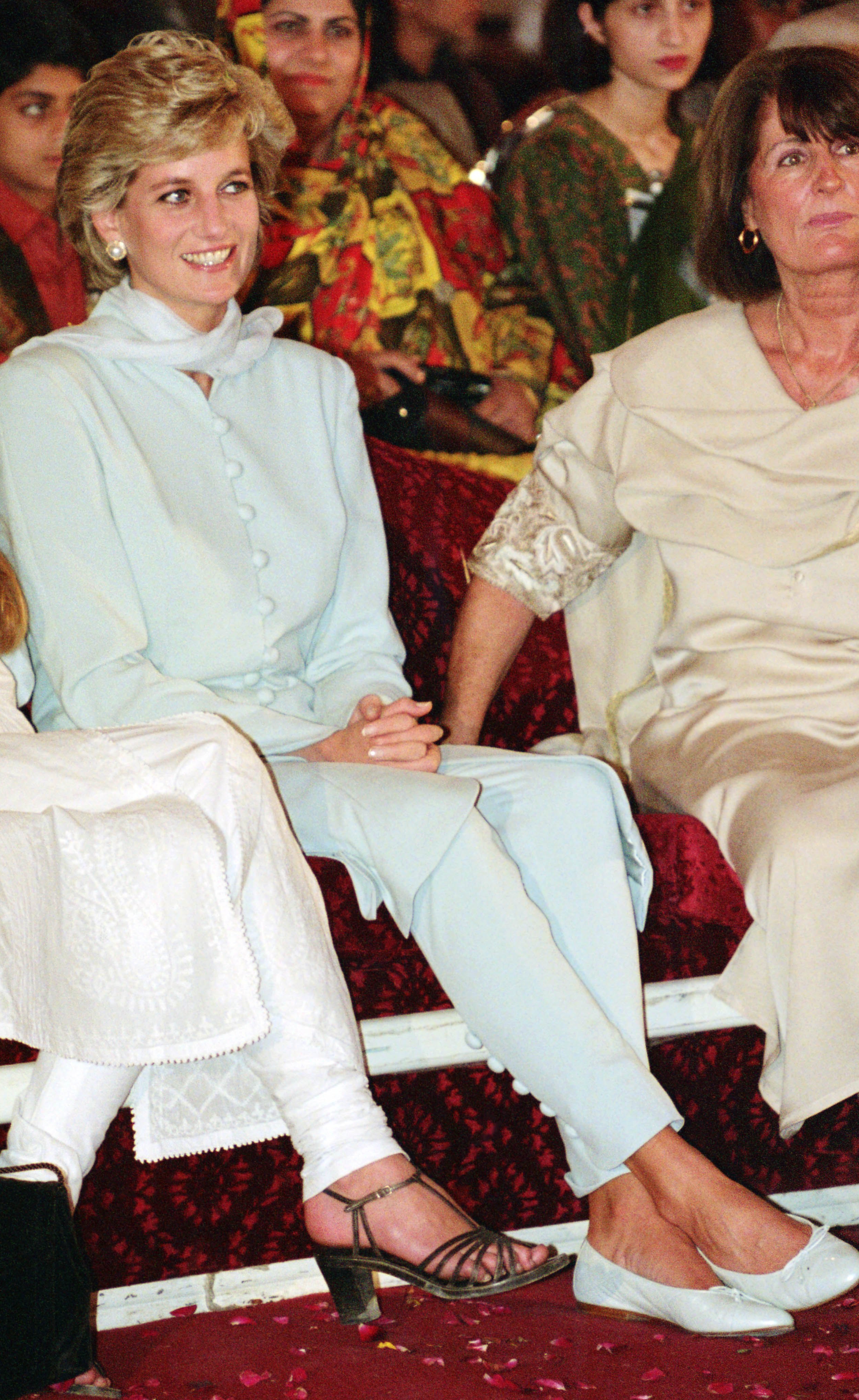 While another said: "Is Kate channelling Diana? Wasn’t this the colour she wore too?"

One fan explained they had a "nostalgia" over the outfit.

"Kate is giving Pakistani nation a serious kind of nostalgia… Memory of our beloved princess Diana’s visit to Pakistan," they wrote.

"I can see Princess Diana picture in William and Kate Middleton. Beautiful couple," said another. 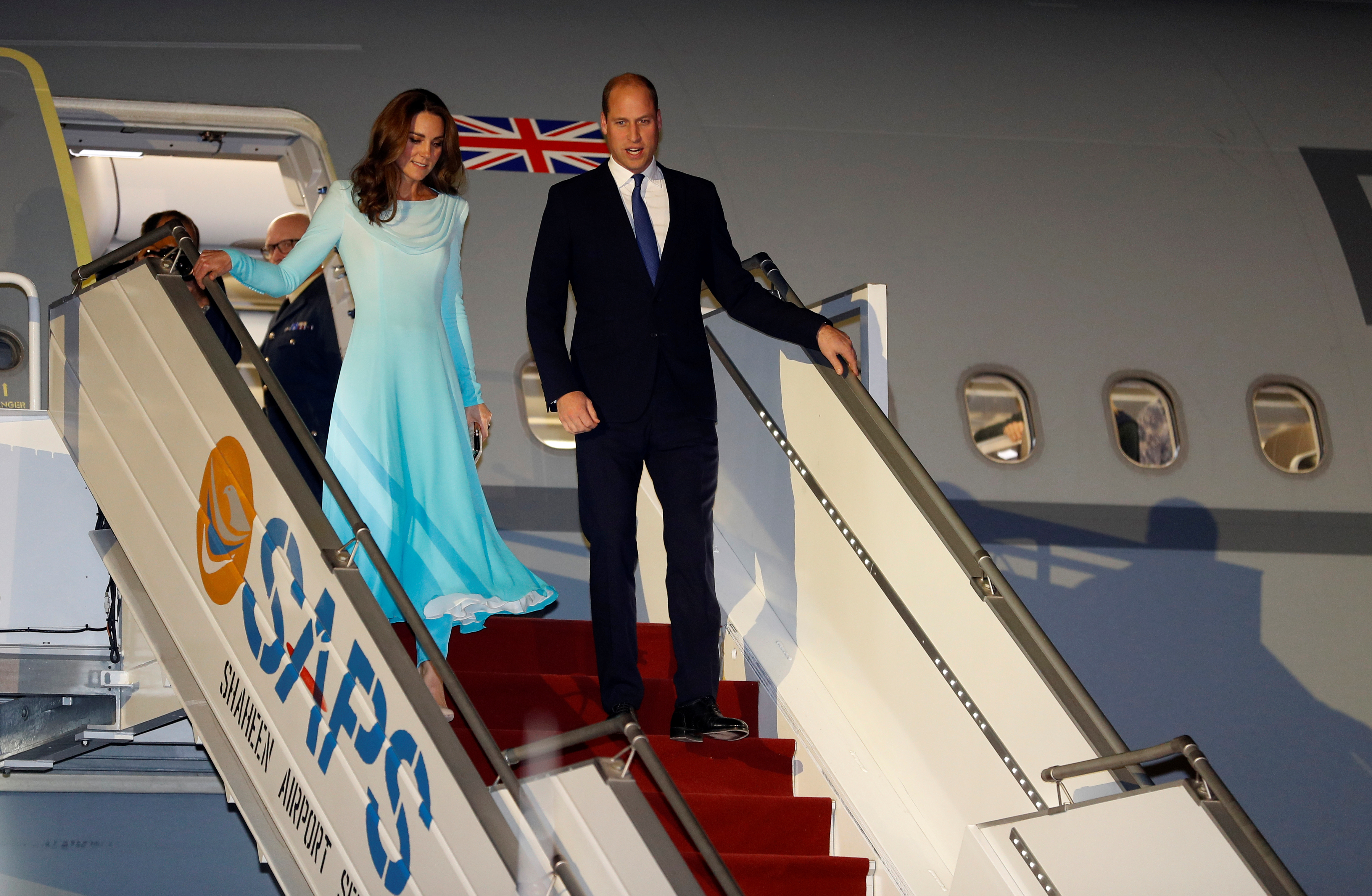 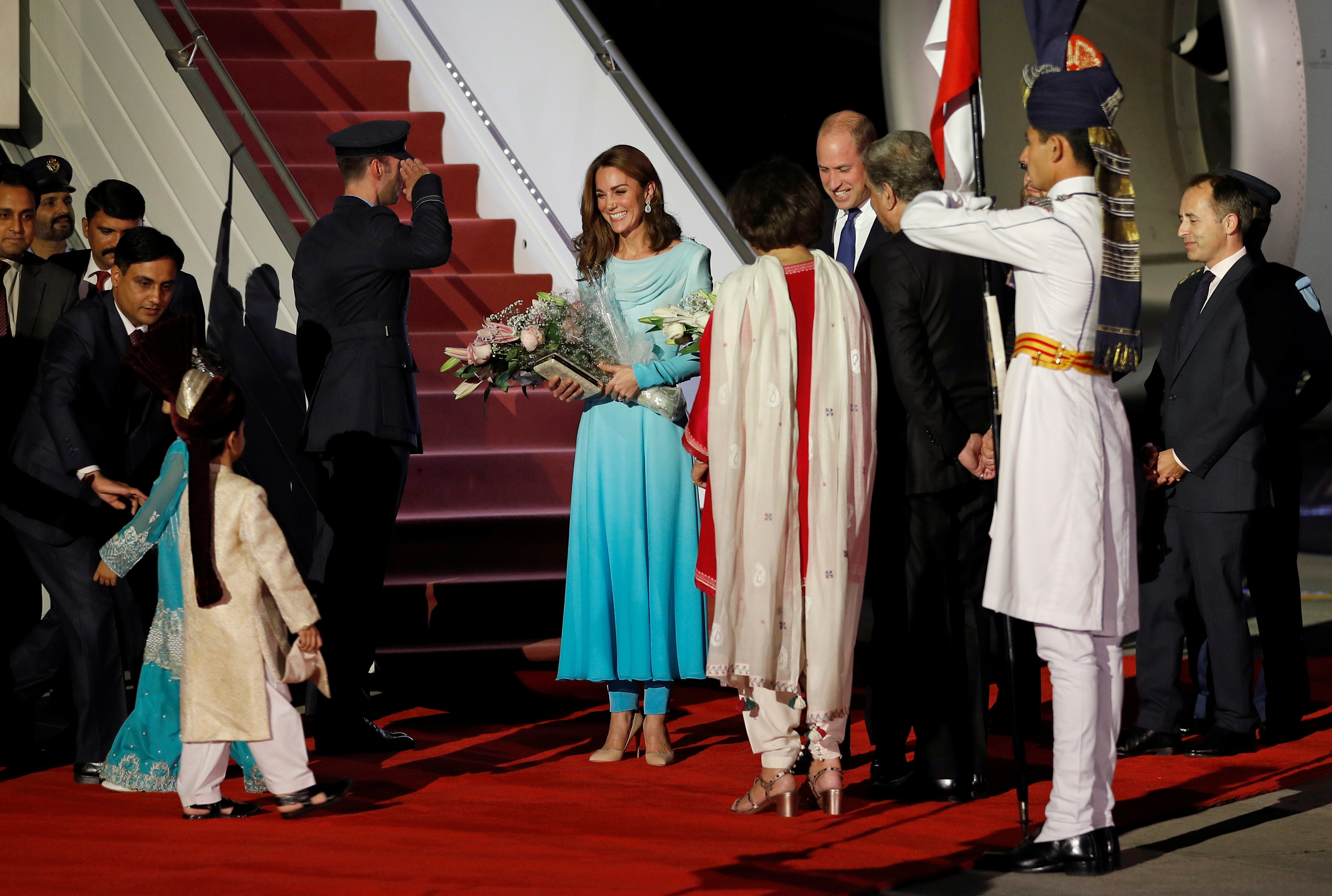 The Duke and Duchess of Cambridge looked happy and relaxed as they arrived for their four-day trip and were each presented with a bouquet of flowers as they walked down the red carpet at the air base.

The couple will visit Islamabad for four days between October 14 and 18 in what will be their first visit to the country.

The tour has been dubbed their "most complex ever" by Kensington Palace and comes amid heightened tensions between India and Pakistan over the disputed region of Kashmir, with which both countries share a border.

Details of the royal couple's engagements will be released each day amid the heightened security concerns.

In other royal news, we told you a tell-all Meghan Markle biography is set to be written by the man who dubbed Prince Charles the ‘Rebel Prince’.

We also revealed Kate Middleton went to family therapy sessions to help her brother James as he battled depression.

And we told you the Queen ‘is a massive JLS fan and loved watching them on TV while eating her dinner’, JB Gill reveals.