Australian model Robyn Lawley is recovering from a facial injury after she fell down a set of stairs during a seizure.

"As I’m getting ready to return to work, feeling strong and near myself again, I want to be completely honest with you, in this day and age where we seemingly share all, I needed some time, healing physically and emotionally," she wrote.

Lawley said she fell 7 ft (2.1m) down her staircase at home two months ago, noting that while it is "ironic" that a model has suffered a facial injury she is "grateful [she] didn't break [her] neck".

Lawley, who has a three-year-old daughter, Ripley, with partner Everest Schmidt, said she was grateful the damage from the fall was only superficial.

"I’ve managed to come full circle with that gratefulness, and luck," she wrote. "I could [have] had [the fall] holding my daughter for example, or I could be in a wheelchair, or not breathing at all."

Keeping a good sense of humour, the model joked she is an "official wizard" with the new lightning bolt-shaped scar on her forehead giving her a look not unlike Harry Potter. Known for a bare-faced look in her daily life, Lawley added that she would probably not seek to cover up the scars, which also appear on her lip and chin. 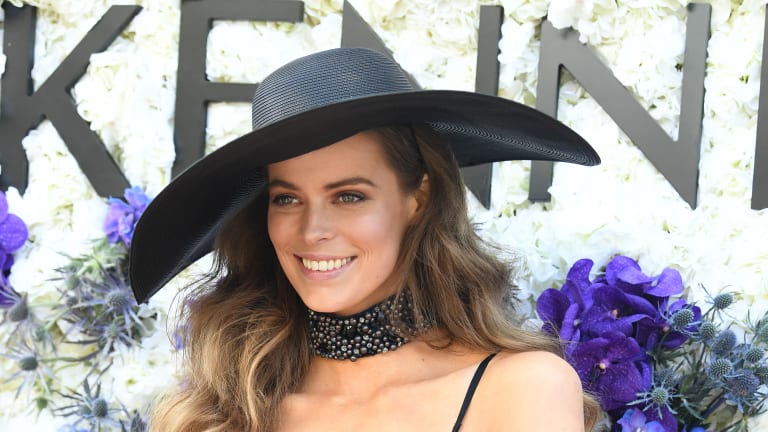 Robyn Lawley is seen at the Birdcage on Victoria Derby Day at Flemington Racecourse in Melbourne, Saturday, November 4, 2017.

Sydney-raised Lawley, who is known for being the first "plus-size" model to appear on the cover of  Sports Illustrated, was diagnosed with Lupus after giving birth to Ripley in February 2015.

Revealing her diagnosis to Marie Claire the following year, the model said she suffered a host of symptoms after the birth.

“I had vision loss, ocular spots, difficulty operating my hands. I felt terrible and I thought I had cancer or MS,” she said.

She was eventually diagnosed with the autoimmune disorder antiphospholipid antibody syndrome with systemic lupus erythematosus (SLE), the most common form of lupus. Most people diagnosed with SLE are women in their childbearing years.

Lawley told the magazine she would not be having any more children as a result.

“I won’t get pregnant again out of pure fear,” she said. “If I had another attack while I was pregnant, the medicine I’d have to take is so hardcore it’d probably cause health problems for the baby. It’s too risky, so I am done.”