Rihanna and A$AP Rocky have been showing their love all over NYC after the Met Gala! The music couple looked so chic as they both rocked stylish black outfits on Sept. 17.

Rihanna and A$AP Rocky have been all over the Big Apple this week. Following their unforgettable Met Gala ensembles, the 33-year-old singer and her rapper beau were spotted while shopping on Friday, Sept. 17. Rihanna and A$AP, 32, held hands as they left the Rick Owens store on the Lower East Side’s Howard Street. It’s unclear if the duo bought anything from the designer label, which is best known for its minimalist, ’90s inspired cuts, but the pair looked ultra-stylish anyway.

The “Umbrella” singer and “Wassup” rapper twinned in black for the high-end shopping excursion, channeling streetwear style for both looks. Rihanna opted for a satin bomber jacket and flared leather pants, adding a chunky boot to outfit. A lover of eyewear, she added a pair of black sunglasses and a layered pearl necklace to finish the look. Meanwhile, A$AP wore a leather cargo pant and lug boots, along with a gray t-shirt and black hoodie. 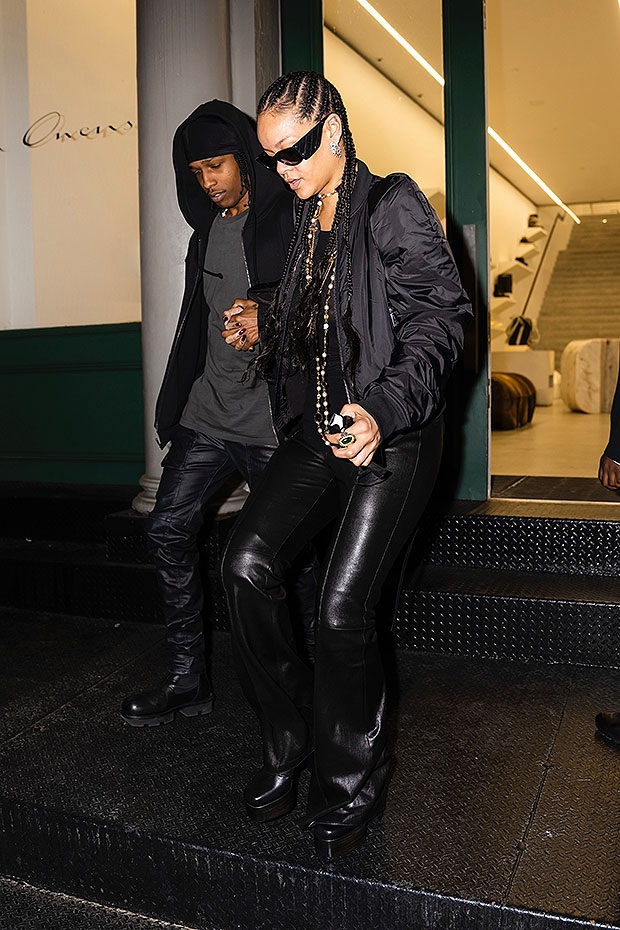 The popular duo have been spotted all over NYC in recent days, including in the Seaport area of NYC as well as during a late night date to Harlem’s El Puerto Seafood & Fish Market. Rihanna and A$AP were beaming as they snapped photos with fans at 3 a.m. outside, also signing an autograph for one particular fan who appeared to have one of her albums. The couple, who began dating in late 2019 after a years long friendship and rumored 2012 hookup, looked so cute as they once again held hands while A$AP enjoyed a cigarette.

Rihanna rocked a similar ensemble for the early morning date, going with another black bomber — this time in leather — as well as a matching straight leg pant. She added a furry bucket hat and sunglasses once again. A$AP also looked elated as he smiled in a gray t-shirt and black hoodie featuring neon yellow details.

ight Both A$AP and Rihanna turned heads on Monday night at the Met Gala as they channeled the theme “In America: A Lexicon of Fashion.” A$AP appeared to keep the quarantine vibes going with a bright, patchwork blanket inspired ensemble by American designer Eli Russell Linnetz. Rihanna, as always, stunned in a black dress by Balenciaga and diamond choker by Bvlgari.