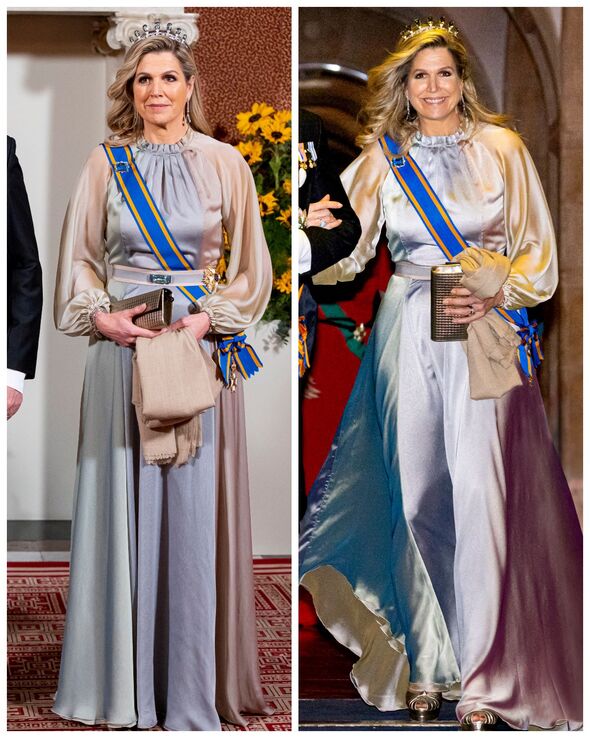 Queen Maxima, 50, made a grand entrance when she appeared at the state banquet for the India State Visit to the Netherlands on April 5. She wore her Luisa Beccaria iridescent multicolour ‘Georgette’ dress that cost £1,415 when she first purchased it in 2016. Maxima accessorised this elegant dress with her Lady Dior ‘Croisiere’ clutch in silver-tone perforated calfskin that cost a whopping £341.56 before it sold out.

The Queen of the Netherlands then chose her Aquamarine Parure Tiara, earrings and brooch for the regal occasion.

Maxima’s tiara is one of the more modern pieces in the Dutch royal collection.

The art deco-style tiara, which is made up of pear-shaped briolette and square-cut Brazilian aquamarines and some diamonds, was made by Dutch jewellers van Kempen, Begeer and Vos.

More pieces of the aquamarine parure have been added over time, including two necklaces, a pair of earrings and a brooch.

Because the set is made of pieces collected over time, rather than pieces made at the same time specifically as a set, the suite is known as a ‘married’ parure.

Nearly all the Dutch Queens and Princesses since 1927 have worn pieces of the parure, including the tiara.

At the gala held the night before King Willem-Alexander’s inauguration, Princess Laurentien wore the tiara low across her brow, paying tribute to its 1920s roots.

Today, both Princess Beatrix and Queen Máxima wear the tiara occasionally, though Máxima is much more likely to step out in nearly the entire parure, as she did last night.

All Dutch Queens will also have access to the family’s aquamarines in the future — the tiara has been a part of the family’s jewel foundation since 1960, which means it cannot be sold.

Royal fans were divided over Maxima’s aquamarine tiara, taking to social media to discuss the jewel.

One royal fan @mslewis commented saying: “I’m not sure about the tiara. I don’t like it. But that brooch is a real beauty.”

Similarly, @janellemceachern added: “Maxima does the best job with the tiara but it still looks like a picket fence.”

Royal watcher @StephenODonnell said: “This tiara looks a bit silly to me.”

“Frumpy dress design and the stones sticking up out of the tiara like that are quite unartful.”

Another account, @BlueSapphire70 wrote: “I love aquamarines and these are luscious!”

Similarly, @mydocuments_ added: “The tiara is particularly well suited for the gown.

“The colour of the stones almost looked a bit muted with the tones of the dress.