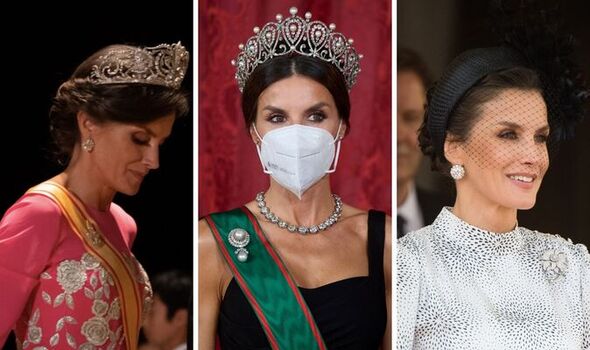 It is not just the UK Royal Family who have an impressive jewellery collection. Spanish Queen Letizia always looks stunning in lavish accessories. Maxwell Stone from jewellers Steven Stone analysed and valued some of her most show-stopping pieces.

Queen Letizia occasionally wears a bracelet and necklace with a combined worth of £20million.

The piece had been given to Victoria of Spain, Queen of Spain between 1906 and 1931, by her husband King Alfonso XIII.

Each year on their anniversary, the King added two stones to her necklace, which resulted in a “stunningly large jewel”.

Maxwell stated: “Everything about this necklace is breathtaking.

“The diamonds look to be the same size all the way around, and are probably around 15cts each.”

The Fleur-de-Les diamond tiara is another of Queen Letizia’s prized jewels.

As part of the Joyas de Pasar – jewels that are passed down – it has eventually reached the hands of Queen Letizia.

Crafted by Spanish royal jeweller Ansorena, the piece is estimated to be worth an eye-watering £10million.

Unsurprisingly, Queen Letizia has worn the tiara at grand events such as a visit to Buckingham Palacein 2017.

She also wore it to the Imperial Enthronement in Tokyo in 2019.

Another piece in the Joyas de Pasar collection is a pair of extravagant diamond drop earrings in the shape of a flower.

The diamonds are estimated to be worth an incredible £6million.

In June 2019, she wore the earrings at the Order of the Garter Service.

In 2021, she wore the timeless piece at a State banquet hosted by Swedish King Carl XVI Gustav and Queen Silvia at the Royal Palace of Stockholm.

Less expensive but just as beautiful as Queen Letizia’s Fleur-de-Les tiara is the Spanish floral tiara.

Maxwell described the 19th century tiara as “lightweight and classic”, meaning that Queen Letizia can wear it with more casual outfits.

Finally, Queen Letizia is the proud owner of diamond and sapphire earrings, worth a whopping £1.3million.

Maxwell said: “These earrings feature four huge sapphires and what looks to be over 100 diamonds, meaning not only are they incredibly valuable, but also very heavy, which is one potential reason why she hasn’t worn them as frequently as her other pieces.”

However, she did brave them in London in 2017 for a banquet at the Guildhall, pairing them with the Spanish floral tiara.