September occupies a mythical position in the fashion industry, when magazines are traditionally heavy with advertising and substantial winter purchases are made. This year, however, fashion’s most important shopping month will be disrupted by Second Hand September, a drive urging consumers not to buy new clothing for the entire 30 days.

The Oxfam-organised campaign aims to raise awareness of fashion’s environmental impact. Nicola Tallett, the charity’s director of engagement, said: “We have seen on a daily basis the impact of the climate emergency on people living in poverty, whether through the droughts in east Africa or the earthquakes in Asia, and we wanted to do something about it.”

The 30-day moratorium, she added, could be the basis of long-term changes. “It’s long enough to force you to create new habits – but not so long that it feels daunting.”

Second Hand September is part of a burgeoning movement. Other initiatives urging shoppers to eschew new clothing include Fashion For Good’s three month-long #slowfashionseason, while Extinction Rebellion is urging its followers to boycott fashion for a year, and has requested that London fashion week be cancelled.

“By asking people to boycott fashion it sounds as though we are telling people to make a sacrifice,” said Extinction Rebellion’s Sara Arnold, “but actually we don’t need to go without – there are so many items of clothing out there. It’s also not saying that we shouldn’t be creative – there can be an explosion of creativity, whether that’s upcycling your own clothes or swapping clothes. Restrictions can be a source of creativity.”

Oxfam’s campaign is backed by many who work in fashion, including the model Stella Tennant, who appeared in a shoot promoting the initiative, and Bay Garnett, a stylist best known for putting Kate Moss in vintage clothing in the 00s. 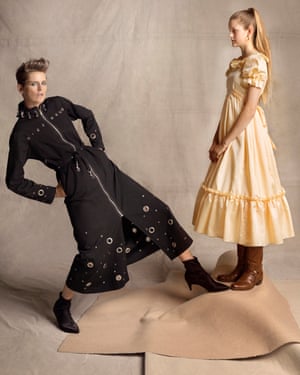 About 15 years ago, the vintage trend was often “about referencing the past and about individuality an a sense of coolness – cache – in finding something unusual,” said Garnett. “This time, its meaning is not just aesthetic but political. With the younger generation wearing second hand is a political and environmental choice.”

Their involvement is reflective of an industry in soul-searching mode as it faces up to its role in the climate crisis. Such initiatives “are brilliant ways to get more people informed about the challenges we are facing due to sustainability and climate change”, said the British Fashion Council’s CEO, Caroline Rush.

“With an industry that is growing faster than the wider economy, it’s important that we address these challenges and inspire both the industry and the public to follow.”

Garnett said: “There is a brilliant magic that happens in a charity shop. It’s a different mindset: you’re working too. It’s more of a task. I love the thrill when you find something. And you may not every time – and that’s life – there are no guarantees. But when you do no one else will have it.”